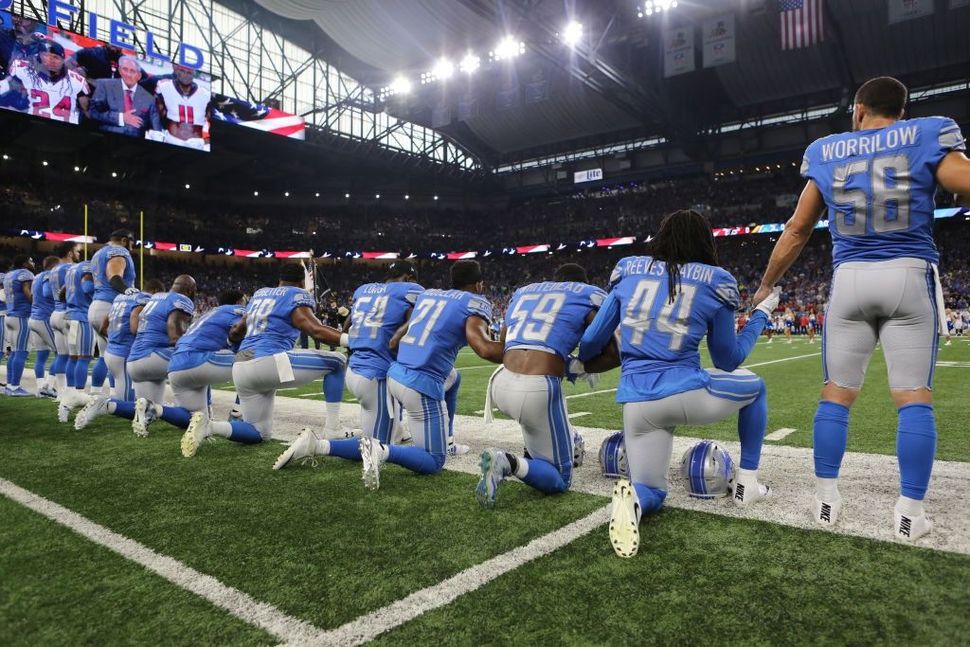 Those athletes you’ve watched kneeling during the national anthem have lit a political fire of a sort not seen in professional sports in years. By bending a knee to protest racial injustice, they’ve electrified liberals and progressives, forged new bonds between team owners and players, elevated the sport beyond a mere game and exposed yet another ugly side of Donald Trump.

They’ve also helped, inadvertently, to lay the groundwork for continued Republican control of Congress in 2018 and beyond.

This should worry conservatives as well as liberals. The Republican Party is no longer the party of John McCain, Susan Collins and John Kasich, nor even of the flawed George W. Bush. It’s now the party of Donald Trump and Mitch McConnell, a toxic stew of incompetence, unscrupulousness and ideological rigidity. If this party continues its current hold over every branch of the federal government and two-thirds of state governments into the next decade, you can forget about real progress on the ideals those athletes are touting, and a lot of other urgent causes besides. Including voting rights and fair redistricting.

This is said with hesitation and regret. It’s stirring to see popular heroes kneeling in a row, as if in supplication, asking their country to live up to its promises. Unfortunately, that message isn’t necessarily getting across. In polls Americans disapprove of athletes kneeling during the anthem by margins as high as 2-to-1. Among whites, disapproval runs as high as 3-to-1. Blacks are 4-to-1 in favor. Democrats and Republicans are similarly polarized. Overall, strong majorities oppose firing the protesters, but most don’t sympathize with them.

The protest comes at a critical moment for Democrats. Their party is weaker than it’s been since the Civil War, and it’s caught in bitter tug of war over its future, even its soul. One faction favors doubling down on the current strategy, which relies on an electoral coalition of minority voters, white liberals, racial and gender rights activists and fluctuating majorities among Hispanics and women. The other faction wants the party to front-load economic justice, inequality and labor rights. They want to win back a share of working-class whites who were once within the Democrats’ old New Deal coalition but have been drifting away since Ronald Reagan’s 1980 election and finally bolted en masse this year.

If the public debate seems hard to follow, that’s partly because both sides call themselves the party’s “progressive” wing. More useful labels might be identity politics versus economic populism, though neither side likes those names. Personally, I prefer identity progressives and social democrats.

Further confusing the discussion, both sides claim there’s no real disagreement because each endorses the other side’s core value — minority rights, economic justice. The fight is over who gets top billing.

But it’s not just batting order. There’s a question of moral justice and moral tone. Fighting for rights that others want to withhold seems to entail pointing fingers and naming opponents as racists, homophobes or the like. Identitarians (is that a word?) say it’s important to speak truth, that you have to name the enemy to defeat him. For social democrats, mistrust of white America is understandable, especially this year, but it’s tactically disastrous. They want to bring working-class whites home to the old coalition. Alas, you can’t win folks’ votes by telling them they’re a bunch of idiots and they should vote for you so you can fix their brains.

The athletes’ anthem protest reinforces the identity position, but may prove the social democrats’ point. Many Americans, perhaps most, see the flag and anthem as symbols of the very ideals of freedom and fair play that the protesters are trying to invoke. As such, protesting the flag amounts, in the critics’ eyes, to attacking the ideals themselves. Whatever else the protests might do, they’re not drawing whites away from the GOP.

The modern theory of non-violent protest, as developed by Mahatma Gandhi and Martin Luther King Jr., aims to put the protester’s body on the line in a disruptive way in order to draw the public’s attention and arouse its conscience. It only works if the public understands the injustice you’re trying to spotlight. If they think you’re attacking them or their values, the likely response is hostility. In the end you’ve accomplished nothing — or worse, lost ground.

The athletes’ critics may well be mistaken about the protesters’ intentions. But they’re not delusional. The protest does contain a measure of hostility toward the society it seeks to perfect. When San Francisco quarterback Colin Kaepernick first took a knee in August 2016, he explained to an interviewer that he was “not going to stand up to show pride in a flag for a country that oppresses black people and people of color.”

Kaepernick isn’t alone in his anger. It’s evident on campuses, in politics, in the Black Lives Matter movement. There’s a spirit of frustrated revolt in considerable sectors of the black community and beyond, among gay and transgender activists, among battlers for the rights of women, immigrants, Muslims and other marginalized communities. These groups, the leading edge of liberal and progressive activism, are widely seen as the core of the Democratic base. Their actions, rightly or wrongly, help shape the public image of Democrats.

The anger has been growing for a while, but it’s vastly intensified since the last election. Nobody’s articulated it better than the celebrated author and journalist Ta-Nehisi Coates in his much-discussed essay in the current issue of The Atlantic, “The First White President.” His thesis: Whiteness and white supremacy have been central forces in American society since the founding, but Trump is the first president elected precisely because he is white. Trump is white America’s reply to the Obama presidency. “Trump,” Coates writes, “truly is something new — the first president whose entire political existence hinges on the fact of a black president.” And all attempts to find alternate reasons for Trump’s election — Coates is particularly harsh on the thesis of white working-class economic distress — are simply ways of avoiding the central truth of racism.

On the other hand, things do change. Blacks have found their voice. Black elected officials, just a handful nationwide in 1960, now number in the thousands. There’s been progress in open employment, in executive suites, in health, in college admissions. Prejudice and segregation, once badges of honor, have been discredited sufficiently that even rank racists feel compelled to pretend they’re not.

A snapshot of black America today shows grave problems on nearly every front. But a timeline of the past half-century shows that, as King said, the arc of the moral universe really does bend toward justice, if painfully slowly. It’s essential to recognize the work accomplished along with what’s still undone.

Coates’s bigger error is his central thesis, namely that Trump is president because of white backlash against the presidency of a black man. That’s surely a factor in Trump’s victory, but it’s one of many. There’s the Comey letter, Russian interference and undeniable sexism. And, of course, the absurdity of the Electoral College, which gave Trump the White House despite his losing the popular vote by millions. Trump is the second Republican in a row to lose the popular vote but win the Electoral College.

If Trump’s victory was simply a product of white backlash to Obama, he should have received a higher proportion of the white vote than previous Republican candidates got. He didn’t. The fact is, Republicans nearly always win a majority of the white vote. Trump’s share wasn’t unusually high. Of the 18 presidential elections since World War II, Republicans won a majority or plurality of white votes in 17. Of those 17 GOP campaigns, six topped Trump’s 57% share of white voters. He’s in the middle third.

The Democrats won a majority of white votes only once, in 1964, a year after Kennedy’s assassination and King’s “Dream” speech, with Barry Goldwater leading the GOP ticket.

One thing that changed last year was a population exchange: working-class whites fleeing to Trump and white college graduates to Clinton. What besides racism could cause that particular Trump bump? Start with the conventional wisdom: economics. Most Americans haven’t had a real raise in nearly four decades, under Democratic and Republican presidents alike. Factory jobs and pensions have disappeared, replaced by burger-flipping and permanent insecurity. Children face a worse future than their parents for the first time ever. Both parties make promises, raise and lower taxes, fiddle with trade, and nothing changes. Then there’s the disappointment and resentment that the left masses in the streets over police killings, gay marriage and immigrant rights but not union-busting, pension theft or opioid deaths. Finally, when everything blows up and 8 million homes are foreclosed, a Democrat bails out the banks and leaves you naked. Why not try something different? Why not blow things up for a change?

Working-class whites are the nation’s largest single demographic at 44% of the population. Without them, Democrats have at best an even shot at occasionally winning the White House, but they can’t break the GOP lock on Congress. Republicans’ congressional control is a product of gerrymandering and what’s called demographic sorting, meaning the dense clustering of Democratic voters in big cities and on the coasts. By some estimates, Democrats would need a 55% margin to retake the House. That would require a coalition realignment.

And without Congress, Democrats can only play defense. They can’t advance a progressive agenda — neither on race and gender nor on economic justice.