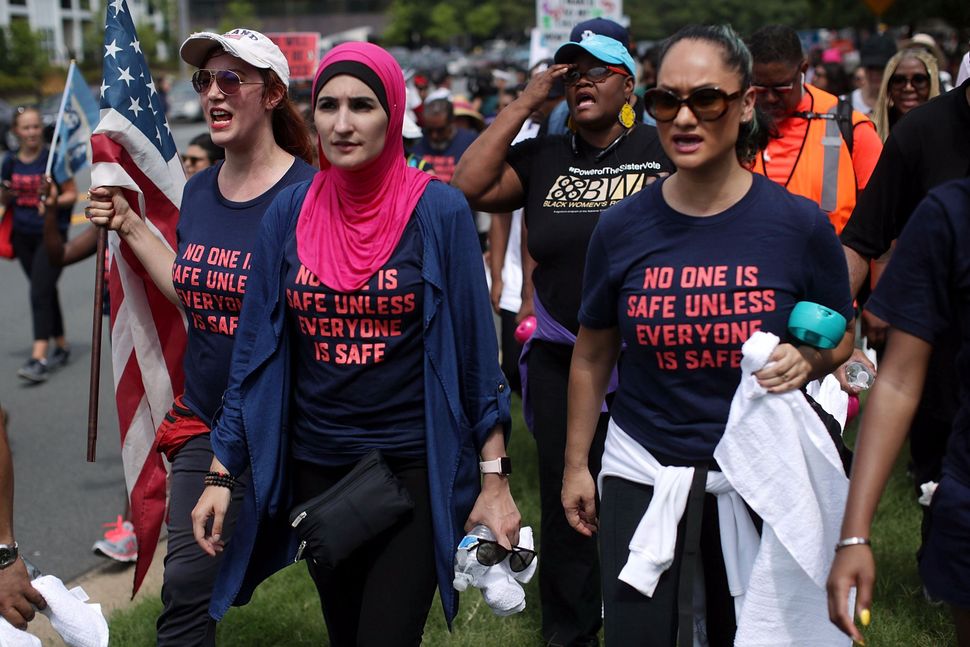 Yesterday, I attended the March for Racial Justice in New York City. It was a march graciously and thoughtfully put together after the organizers of the same march in DC realized that they had scheduled their original march on Yom Kippur.

It was a perfect, sunny day. There was a feeling of hope in the air, and I felt less heavy and stronger than I had at almost any other protest I had been to before.

It was the feeling of a truly pluralistic event, one in which all peoples were included and united.

And then, for all of five minutes, Linda Sarsour stood up and spoke harshly about some of the marchers at the event. Specifically, she seemed to call out those wearing overtly Zionist signs, like the group Zioness Movement.

People felt uncomfortable. Some in the Orthodox group I’m part of, Torah Trumps Hate, said they didn’t feel welcome anymore. Some were angry. And then it was over, and ten minutes later, the march started.

It was a march that seemed to span the entire length of Brooklyn Bridge. A march whose participants echoed the chants of so many before: that black lives matter. No hate, no fear, all are welcome here. This is what Democracy looks like. People of all colors, backgrounds, religions, unified in a beautiful moment of solidarity for racial justice.

And yet, ever since the march, the reporters who I’ve spoken to have asked me one unifying question: What did I think of Linda Sarsour’s comments?

So, here’s what I think: I think it’s a shame that this has become the focus of yesterday’s march.

Yesterday’s march was not about any one person. It was about racial justice. It was about living in a country where our president cares more about a black NFL player kneeling during the anthem than Neo-Nazis calling for death to Jews and blacks in Charlottesville. A country that voted in this man. A country where innocent people of color have been repeatedly murdered by police and a country where those police are then almost automatically acquitted. And, often overlooked, this is a country in which all these issues are faced by Jews of color just as much as any other person of color.

To make a march about important, heavy topics about the comments of one person who spoke for five minutes is not just a mistake. It is a tragedy.

It destroys the work of the organizers who worked so hard to make it happen. It distracts from their message. And it further divides a movement that needs more than at any time to unify.

None of that is to say that the concerns about Linda Sarsour are not justified. But in this context, they are not the point. They are the opposite.

Even worse, as a Jew who is trying to mobilize our community to fight the causes I know we believe in like racial justice, such overwrought controversies result in only one thing: a self-silencing.

When those we love and agree with about issues like Israel spoke up against us for marching yesterday because of some of the other members (especially Jewish Voice for Peace), we spoke about the importance of being able to inhabit spaces with people we disagree with. We spoke about how choosing not to march meant that any voice we may hope to have in such movements has been muted. We spoke about how, whatever our disagreements, none of that has anything to do with one simple reality: our job is to do the right thing.

So, again, I do not want to talk about Linda Sarsour. Not today, at least.

I want to talk about how 99% of the march yesterday was full of light — both physical and spiritual. I want to talk about how, despite one brief uncomfortable blip, everyone at the march chanted in unison all the way from Brooklyn to Manhattan, how after the march, we stood in a circle and sang, “I believe we will win” in joy. How one of the people representing Puerto Rico activists at the end of the march spoke with such beauty and eloquence that many of us were in tears, or close to it. How afterwards, my group and others came together, hugged, and then commiserated with the organizers of the march.

I want to talk about that. And how that was a step, one step, towards fighting the hidden white supremacy and racial injustice gripping the United States that has led us to this moment of crisis.

I am tired of speaking about only my concerns. I am tired of writing only about myself. If we are the generation of “I”, we have entered the age of “we”. And it is only when we truly accept this reality that anything will ever be done.

Elad Nehorai is the writer behind the blog Pop Chassid, the co-founder of the creative Jewish website Hevria, and one of the leaders of Torah Trumps Hate, a new orthodox Jewish activist organization and community.