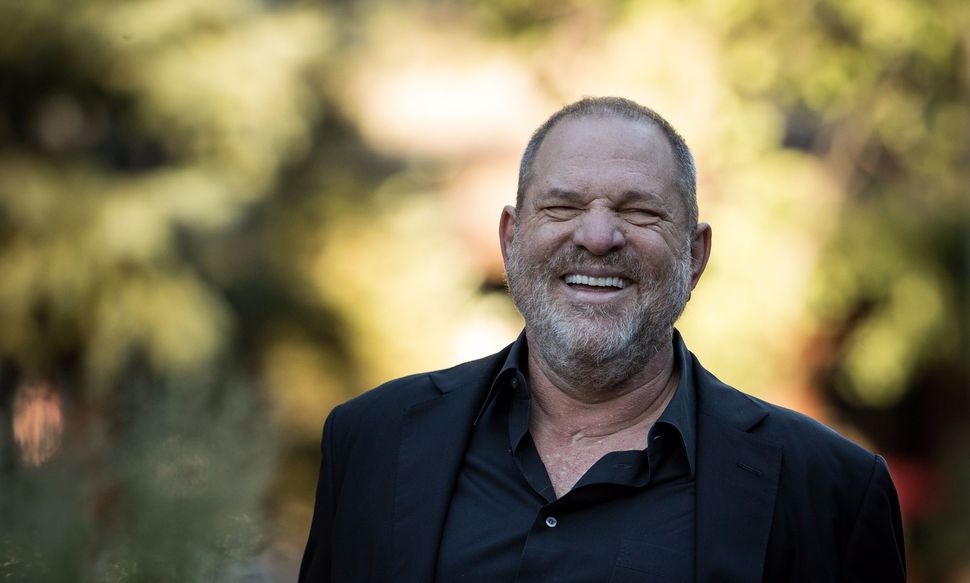 Within Harvey Weinstein’s incoherent statement of apology in the New York Times Friday after he was accused of being a serial sexual harasser of women, among the clumsily misquoted Jay-Z lyrics was an implicit justification for his actions: “I came of age in the 60’s and 70’s, when all the rules about behavior and workplaces were different. That was the culture then.”

Indeed, some of the coverage on the Weinstein bombshell took this ball and ran with it. On NPR’s Up First podcast this morning, Steve Inskeep mused, “I hate to say it, it’s almost, as described, almost stereotypical behavior for a studio executive, inviting women into a room or into a hotel room and saying ‘I’ll help with your career if you do certain things for me.’”

“Well, yeah, a lot of what people are talking about now is that notion of the casting couch and how there was almost this kind of romantic notion placed upon it for many years,” Washington Post pop culture correspondent Elahe Izadi agreed.

As a sex worker, I admire the resilience and nerve of actresses of years past who leveraged these sorts of casting couch sexual transactions into fame. But their savvy working of a system in which their options were severely limited didn’t make that old system any less abusive. This appeal to the unspoken mores of old Hollywood — “romantic” or not — is no excuse for the sexual predation Weinstein is accused of.

There’s nothing inherently wrong with sex as exchange. If Weinstein had made an appointment with an escort, I wouldn’t condemn him for that. Indeed, Weinstein had the cash and connections available to him to have hired an escort every evening of his life if he were so inclined; Hollywood has a thriving sex industry, according to reports in the news and from the many sex workers I know. But according to the many accusations against him, Weinstein, like many abusive and powerful men before him, didn’t seem interested in making these sorts of deals with women on an even playing field. What seemed to arouse him was making no-win propositions to women who might not feel like they had a choice.

An escort can refuse a prospective client if something doesn’t feel right. She can negotiate her rate, and she leaves when the session is over. She is employed specifically for sex and those conditions are clear, whatever the legal fiction must be about being paid for time. Whatever her economic circumstance, even as a survival sex worker, she usually doesn’t live under the sway of one client.

But instead of choosing to have transactional sex under those sorts of more equitable conditions, Weinstein is accused of propositioning women clearly under his power — low-level assistants and struggling actresses and models. Embedded in these propositions was not only the offer on the table, but also the threat of what would happen to a woman who refused.

“How do I get out of this room as fast as possible without alienating Harvey Weinstein?” said Ashley Judd, recalling her thoughts twenty years ago when Weinstein pressed a massage on her in his hotel room to the New York Times. And that’s exactly it — Judd knew that alienating Weinstein and losing his backing were the economic stick behind the carrot of what Weinstein could do for her as an actress if she pleased him.

Sex worker theorists often point out that the reason that sex work is not valued as work is because it falls under the rubric of women’s care labor — things women are meant to do for free as a condition of being women. This was the logic behind pioneering sex worker advocate Margo St James and her organization COYOTE’s early alliance with Wages for Housework in the 70s. Make no mistake, sex work is work — and as such, it should not be an unwritten contract stipulation of every employed woman’s job. It should not be expected of a terrified, underpaid assistant locked in a hotel room with her naked studio exec boss demanding she give him a massage, worried that if she refuses she will lose her job. That stark imposition of power is rightly called sexual harassment.

“I am a 28 year old woman trying to make a living and a career,” Lauren O’Connor wrote in her searing memo. “Harvey Weinstein is a 64 year old, world famous man and this is his company. The balance of power is me: 0, Harvey Weinstein: 10.”

Based on these reports, Weinstein felt entitled to the sexual labor of women like O’Connor who were trying to make a living and a career. In the context of that vast power imbalance between him and the women he harassed, he felt entitled to demand it, wielding the implicit threat of firing or the socioeconomic Hollywood death of never eating lunch in his town again.

His entitlement used to be the unwritten law of the land, and it still is, in many places. That’s why many people — the same people who are aghast at the prospect of prostitution in conditions which are more explicit and autonomous — are still inclined to make excuses for Weinstein’s misogyny. Sex workers often comment that at least in sex work they are paid cash on the dollar for what they are coerced into doing by many legitimate employers as a condition of simply securing their jobs. Thankfully, the Times story and Weinstein’s abasement in the face of it demonstrates that many people are no longer so sanguine about sexual harassment, even the romantic Hollywood casting couch iteration of this sexual violence.

Caty Simon is an activist, dilettante, and writer in Western Massachusetts. She co-edits Tits and Sass, a blog by and for sex workers.