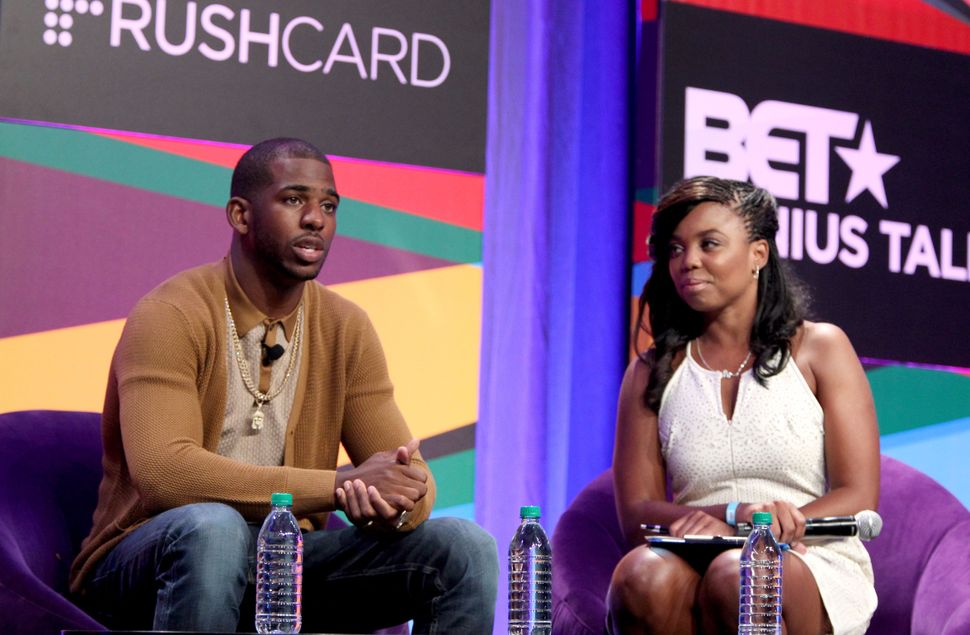 Jemele Hill, an ESPN reporter, has been feuding with Donald Trump on Twitter for the better part of a month. It began early in September when Hill tweeted,

In response, the White House called for Hill to be fired. They didn’t get their wish — that time. But yesterday, after Hill wrote a series of tweets about the brouhaha surrounding NFL players taking a knee during the anthem, ESPN had enough. The channel suspended Hill for two weeks.

ESPN is notoriously intolerant of “political” commentary from its talent. And yet, in suspending Hill and belatedly complying with the White House’s wishes, the sports channel has participated in something deeply pernicious: it has erased the severe disparity of power between a black woman and the United States president. In so doing, it has not only taken away Hill’s right to have her say; it has put another nail in the coffin of the free speech of all of us who might one day run afoul of the president.

The real problem isn’t provocation or disagreement, but a willingness to summon sites of authority to govern opinion. For it’s impossible to understand the implications of free speech absent an examination of social norms, economic hierarchies, cultural loyalties, and political values. Some communities are in a better position to make noise than others; it has everything to do with access to power. And when a white man in the seat of power calls for a black woman to be fired for calling him what he is and she then is suspended, albeit two weeks later, this sends a message to all disenfranchised people that they’d better keep their controversial opinions to themselves.

I often think about these matters because my own Twitter provocations have led to controversy and employment problems. My sharp criticisms of Israel and rancorous interactions with the state’s supporters ultimately cost me a tenured position at the University of Illinois. It also illuminated a longstanding problem: the punishment of those who disturb the sensitivities of pro-Israel organizations.

Few things are as likely to generate acrimony like condemnation of Israel (I hope that even those who consider the acrimony justified will at least concede the accuracy of this statement). And yet while every mainstream pundit seems to have an opinion about free speech, hardly any of them discuss the phenomenon in relation to pro-Palestinian sentiment. A plethora of writers eager to defend right-wingers on free speech grounds disappear when anti-Zionists are bullied into silence (Yes, we’re looking at you, Jonathan Chait).

This selectivity is a crucial feature of how we’re conditioned to judge and regulate speech. A set of informal yet well-established red lines govern public forums in the United States. And as long as everybody knows they exist and what they accommodate, the elites can maintain obedience without interference from the state.

Hill crossed one of those lines by implicating the president as a white supremacist. Another of those lines is criticism of Israel. Or, to be more precise, a certain kind of criticism of Israel. People denounce the United States all the time without getting into trouble; the same holds true of Israel. The problems begin when a speaker questions the structure of the polity. Centers of power generally tolerate criticism that reinforces the notion of a fundamentally benevolent system. A harsher standard exists for analyses casting doubt on nationalistic mythologies. Criticizing Israel’s excesses isn’t the same as rejecting Zionism.

But all the arguing in the meantime nets us little more than a reproduction of the status quo. We need less anger about certain discourses and more consideration of quaint ideals like evidence and accuracy. Those who support Jemele Hill because they recognize that she made eminently supportable comments ought to apply the same logic to Israel’s detractors. It matters that, for Palestinians, Israel is a source of tremendous pain and hardship. Seeking to punish anybody who articulates those feelings is a good way to perpetuate racism and inequality under the guise of maintaining civil standards. (It’s also an awful thing to do.)

That’s what all the drama is really about: a desire—perhaps a need—on the part of some in the pro-Israel camp to avoid having to see Palestinians as worthy of dignity, and the unwillingness of ideologues to confront the ugly side of their patriotism. Donald Trump’s supporters want to hear none of it from the likes of Jemele Hill, either.

These rules aren’t universal, of course, but for the many people who have run afoul of the Israel Lobby’s exacting standards, the exceptions aren’t much comfort. Neither are the solutions we’re normally given. Free speech won’t save us. The simplistic notion of public discussion as an equal marketplace of mottled opinion impedes a graver understanding of what attorney Maria LaHood calls “the Palestine exception to free speech.” What we need instead is a society that doesn’t treat words of justice as an occasion to punish.

In such a world, centers of power constantly make choices for us. If we don’t exercise a more humane set of ethics than those on offer from governments and corporations, then we consign ourselves to a dangerously passive existence. Silence impedes justice. We must take sides. For the groups in the United States who suffer the negative effects of a resurgent neo-Nazism—Black people, immigrants, Jews, Muslims, Sikhs, queers, Indigenes, the undocumented, the disabled, women, ethnic minorities (not to mention those around the world on the receiving end of American aggression)—speaking out can be a matter of survival.