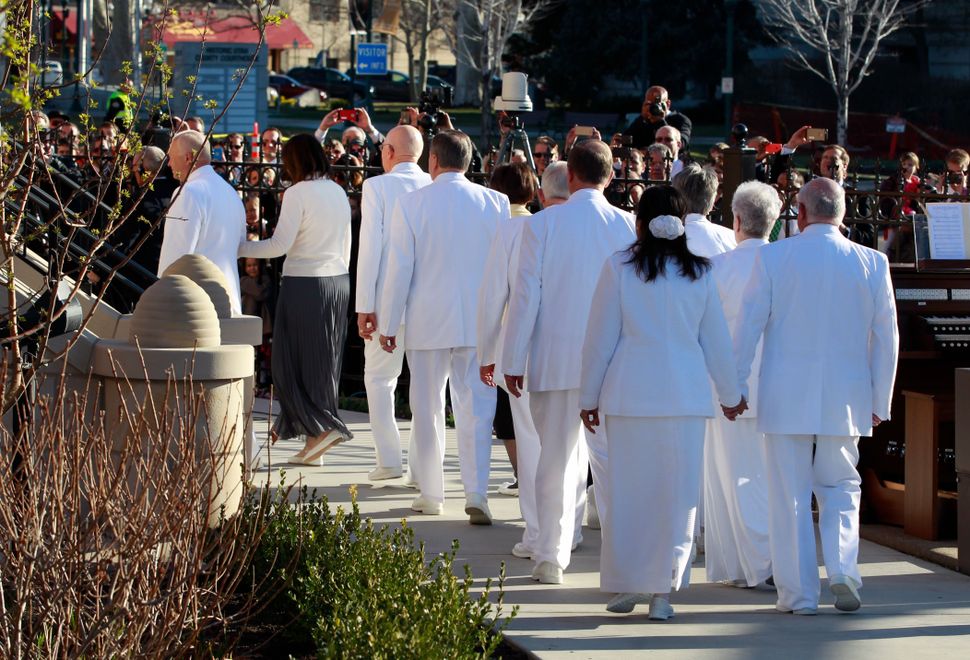 Earlier this month, Stephen Walt marked the 10th anniversary of his and John Mearsheimer’s book, “The Israel Lobby,” with a column in the Forward. In it, he restated his thesis that “unconditional U.S. support for Israel — the so-called ‘special relationship’ — is not explained by U.S. strategic interests or by shared values, as is often claimed, but is due primarily to the political efforts and activities of the [pro-Israel] lobby.”

I think Walt is partially right. It’s difficult, for instance, to explain why America remains so pro-Saudi and anti-Iranian—when Saudi Arabia has far closer ties to the Al Qaeda and Islamic State group terrorists who have struck the United States — without factoring in the clout of the American Israel Public Affairs Committee and other “pro-Israel” groups.

But what Walt misses, at least in his Forward column, are the deeper roots of America’s affinity for the Jewish state. Groups like AIPAC and Christians United for Israel don’t come from nowhere. They exploit a sympathy for Zionism that grows out of the American experience. I came to understand that better on a recent trip to Zion — Zion National Park, in Southwest Utah.

Utah’s politicians are wildly philo-Semitic and pro-Israel. In 2009, The New York Times reported that the state’s senior senator, Orrin Hatch, wears a mezuza around his neck and keeps a Torah scroll in his office. He’s also recorded a song about Hanukkah. Utah’s junior senator, Mike Lee, denounced Barack Obama for proposing a two-state solution based on the pre-1967 lines, and in 2016 posed for photos with a settler leader in Hebron.

A trip to Zion National Park, with its narrow ravines and breathtaking red, orange and pink sandstone cliffs, helps explain why. Members of the Church of Latter Day Saints, or Mormons, comprise 60% of Utah’s population. And they model their story on the story of the biblical Israelites. The Israelites fled persecution in Egypt. The Mormons fled persecution in Illinois and Missouri, whose governor in 1838 issued an executive order declaring that they “must be exterminated or driven from the State if necessary.” Notre Dame political scientist David Campbell, author of “Seeking the Promised Land: Mormons and American Politics”, notes that while fleeing west, “Mormons organized themselves on the model of Moses in the Wilderness.” A biography of their leader, Brigham Young, is actually called American Moses. Utah’s capital, Salt Lake City, abuts the Jordan River. One of the Zion National Park’s most popular sights — three massive cliffs abutting one another — is called “The Court of the Patriarchs.”

And Mormons don’t identify with only the biblical Israelites’ journey to the Promised Land; they identify with the modern Zionist story, too. In the 1830s, decades before Theodor Herzl’s birth, Mormon leader Joseph Smith instructed a disciple named Orson Hyde to “go to Jerusalem, the land of thy fathers, and be a watchman unto the house of Israel” and thus “facilitate the gathering together of that people.” Hyde made it to the Mount of Olives, where he asked God to “Let the land become abundantly fruitful when possessed by its rightful heirs.”

An essay on the Mormon Church’s website, lds.org, suggests that Hyde’s visit may have been the catalyst behind the return of so many Jews to Israel. Following the visit, the essay suggests,

“the Lord’s Spirit began to move among Jews throughout the world. Many who were not even aware of their Jewish ancestry began feeling restlessly Jewish; others who had ignored their heritage felt their hearts begin to turn. A common desire began to build among many Jews to find their roots in their ancient homeland… At first, Jews began returning by the hundreds. But eventually they were returning by thousands and then by tens and hundreds of thousands.”

Given this history, it’s not surprising that Senator Hatch, who has served as a bishop of the LDS Church (in what Mormons call the “Aaronic Priesthood”), told The New York Times, “Anything I can do for the Jewish people, I will do.”

So when “pro-Israel” types say that Americans and Israelis share values, they are right. Underlying those values is a common story. Many American Christians — not just Mormons — see themselves as having fled religious persecution and built a prosperous democracy on a rough frontier.

But that story has a dark side. Before it was renamed Zion, the national park’s name was Mukuntuweap, which in the language of the Southern Paiute tribe means “straight canyon.” It’s one of many hints that the common story American Christians and Israeli Jews share is not only about refuge and rebirth; it’s also about creating what Israelis call “facts on the ground,” or what Palestinians and Southern Paiutes might call “being forced off our land.”

The historical relationship between Mormons and Southern Paiutes is not the same as the historical relationship between Jewish Zionists and Palestinians. Jews believed they were returning to the land from which their ancestors had been expelled; Mormons did not. Mormons tried to convert the people they encountered; Jews did not. In both cases, however, the people fleeing persecution ended up displacing many of the inhabitants already living in their promised land.

In 2013, the Native American and Indigenous Studies Association became only the third American academic organization to endorse a boycott of Israel. That’s the flip side of Orrin Hatch’s fervent support. Luckily for Benjamin Netanyahu, Mormons wield significant influence in American politics. And equally luckily for him, Southern Paiutes do not.

Peter Beinart is a Forward contributing editor and senior columnist at the Forward.