We Are the Jews of Uganda. This Is Our Story. 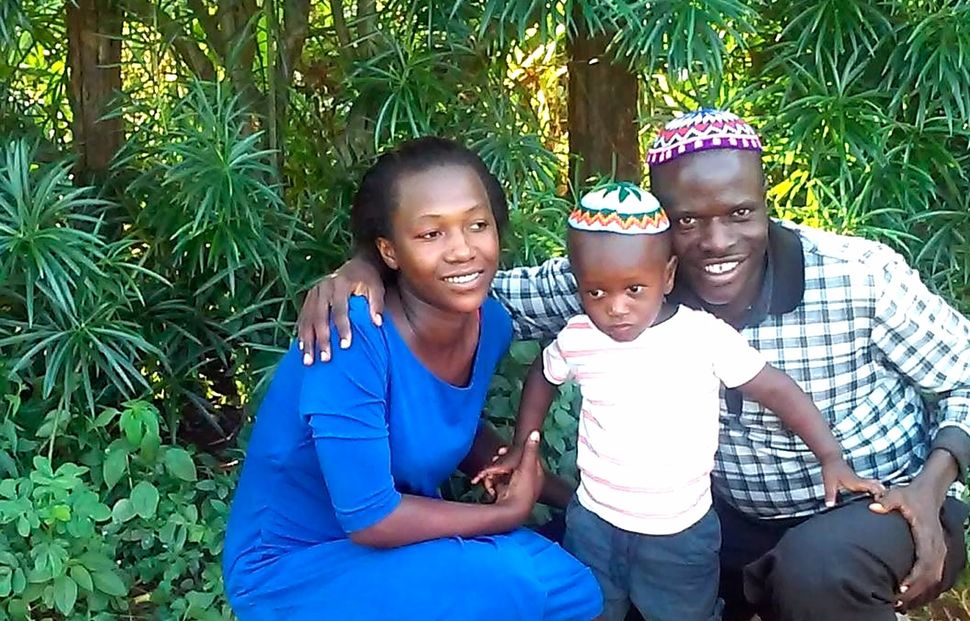 My name is Mugoya Shadrach Levi. I am a second-year rabbinical student and the spiritual leader of the Jewish community of Namutumba in eastern Uganda.

Until quite recently, the presence of Jews in my country was only known to a small number of outsiders. The Jews of Uganda, now widely known by their Luganda name, Abayudaya, have had a fascinating and unlikely if somewhat tormented history, dating roughly from the end of the 19th century. 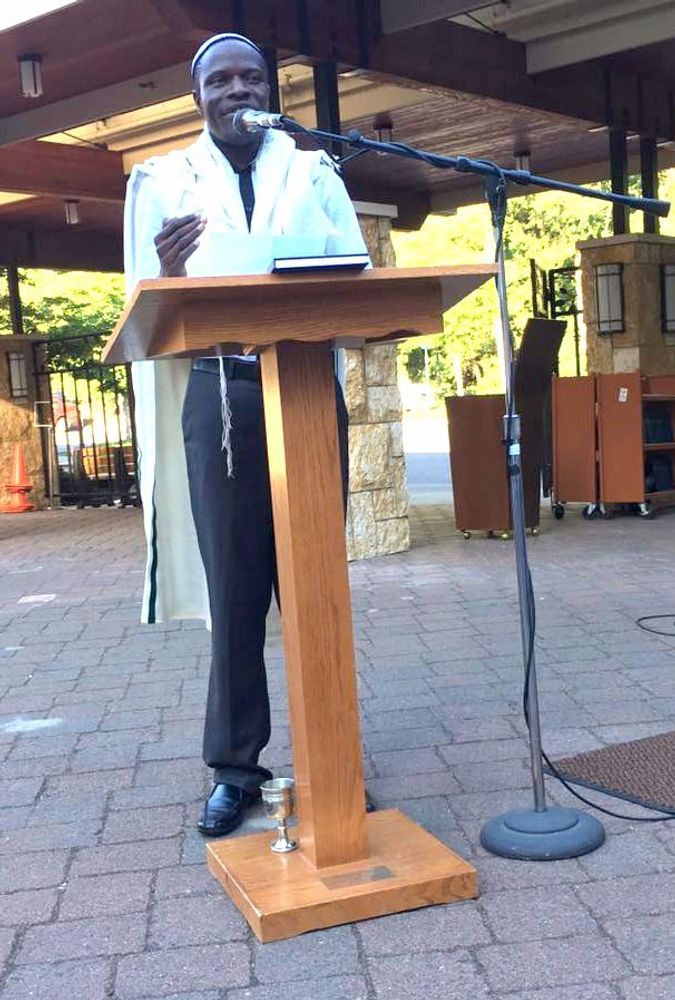 Mugoya Shadrach Levi, spiritual leader of the Abayudaya of Uganda Image by Facebook

Our journey began in earnest with Semei Kakungulu (1869-1928), a military leader and warrior revered by the British colonialists who dispatched him with a small army to squelch an insurrection in the eastern districts of Uganda and bring them under British control. The British favored Kakungulu because of his military acumen and his commitment to the Protestantism they disseminated. For his part, Kakungulu was convinced that, because of his military success, he would be granted the title of Kabaka or King of the Bukedi and Busoga Districts in eastern Uganda.

That never happened. Instead, the British handed control of the regions over to paid civil servants, giving Kakungulu a small pension and some land near Mbale Town in the eastern part of the country. Kakungulu became understandably disillusioned with the British.

At the same time, he’d struck up a friendship with a Yemeni Jewish trader plying his wares in Uganda. The two would sit for hours on end discussing religion. And it was through these lengthy discussions that Kakungulu began to feel that the New Testament was no longer relevant to him. Legend has it that in 1919, the British authorities told him the only people who dismissed the New Testament were the Jews. Upon hearing this, Kakungulu is said to have declared, “Then from now on I am a Jew.” 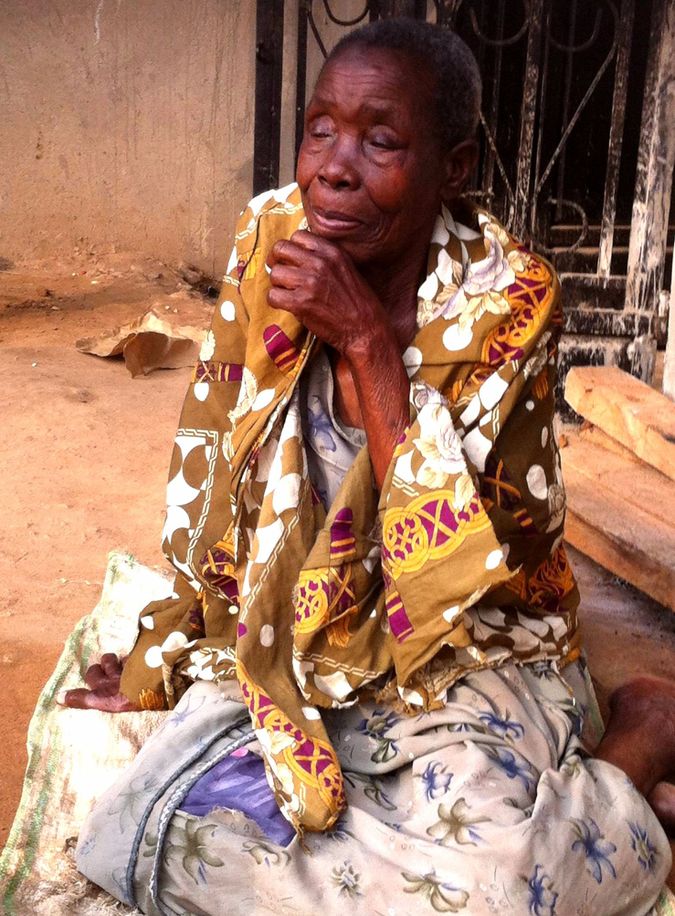 He tore the New Testament from his Bible, circumcised himself and his sons, and retreated with his followers to his holdings at Mbale where he established the Abayudaya community on nearby Nabugoye Hill.

At first, the community members adhered strictly to the Old Testament laws, even going so far as sacrificing animals and removing shoes before entering the synagogue. Through the years, though, the community established contact with some Jewish engineers who were in Uganda working on infrastructure improvements, and Kakungulu’s successors began to understand and observe a more rabbinic style of worship.

The first Namutumba synagogue was built the same year Kakungulu left for Mbala (1919), with Leba Levi serving as community spiritual leader. After Leba’s death, the duties of spiritual leader were taken up by Luwandi Faith, who served until 1971 when Idi Amin Dada seized power in the country and outlawed Judaism.

The synagogue was taken over by Christians, and shortly thereafter was destroyed, as were all the other Ugandan ones. Many Abayudaya converted to Christianity or Islam, but a few intrepid ones continued to practice their religion in great secrecy.

Redemption came in 1979 when Amin was overthrown and exiled. The new president, Milton Obote, took a much less hostile position towards the Jews, reinstating freedom of religion, and in the year following Amin’s overthrow, a new Namutumba synagogue opened, built by Rabbi Eri Kadhiwa.

This synagogue was made of mud with a thatched roof and lasted until 2008 when the current brick building (still a work in progress) replaced it. In 2014, Rabbi Eri “passed the torch” of spiritual leadership to me.

I was born in Magada village in December, 1988. Orphaned at a young age, I was raised mostly by my Uncle James. I attended Semei Kakungulu High School at the main Abayudaya campus in Nabugoye. Lacking for Jewish options, I attended Uganda Christian University.

In 2002, an organization called Kulanu sponsored a Beit Din – a Rabbinic Court — in which rabbis from the U.S. and Israel came to Uganda to convert us Abayudaya formally to Judaism. Unfortunately, this conversion has not been universally accepted in Israe.

But our community has pressed on. Today, we Abayudaya number between 2,000 and 3,000. There are about eight synagogues scattered across eastern Uganda, one in the north, and a meeting house in the capital, Kampala, which was recently opened mainly to serve the increasing number of Abayudaya students attending university there. My Rabbi, Gershom Sizomu, was ordained in the U.S. and was also elected to our current Parliament — in a predominantly Muslim district, no less. 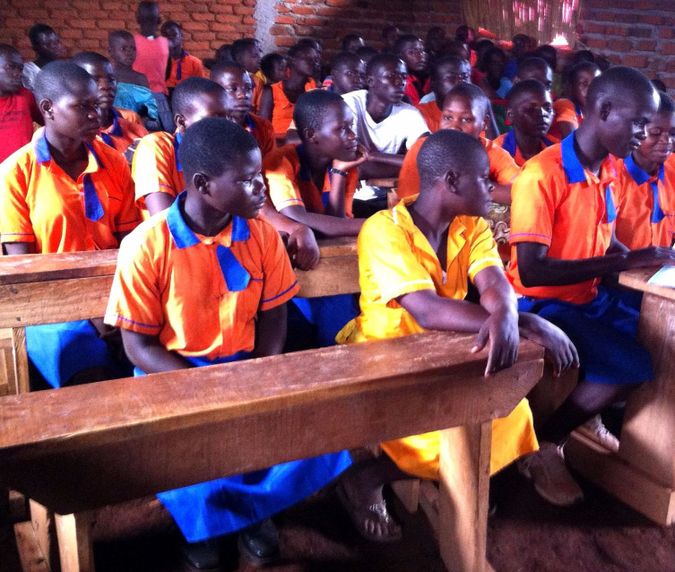 Children study in the school of the Abayudaya, the Jews of Uganda Image by Mugoya Shadrach Levi

And although it is quite difficult to observe kashrut, we do our best! Our diet is mainly vegetarian, although we raise and slaughter our own chickens and goats. We observe Shabbat and all the Jewish holidays, usually offering a feast to the entire community on the major ones. At Pesach, we rely on occasional donations of matzot brought from the U.S. or Israel, but we often wind up having to bake our own since no such products are available in any Ugandan market.

My own community of Namutumba lies approximately 75 km southwest of Mbale. Now the spiritual leader, my duties go far beyond the synagogue. They include farming, fundraising for the community, board membership, managing the community account, as well as serving as a teacher and one of the administrators of Tikkun Olam Nursery and Primary School, which was established in 2015 to provide Jewish-oriented education to the children of our approximately 85 Namutumba Abayudaya families.

For the past two and a half years, I have been studying to become an ordained rabbi through the Aleph Institute for Jewish Renewal under the sponsorship of a Maryland Rabbi, Leila Gal Berner. I normally spend two or three weeks a year in the U.S. for hands-on study and workshops. While in the U.S., I have also lectured at several temples, ranging from Orthodox to Reform and Reconstructionist, exposing me to vast Jewish practices previously unknown in my small Ugandan community.

This year I was fortunate enough to have been accepted into a one-year program of study at the Conservative Yeshiva in Jerusalem where I now find myself studying Hebrew and Talmud. 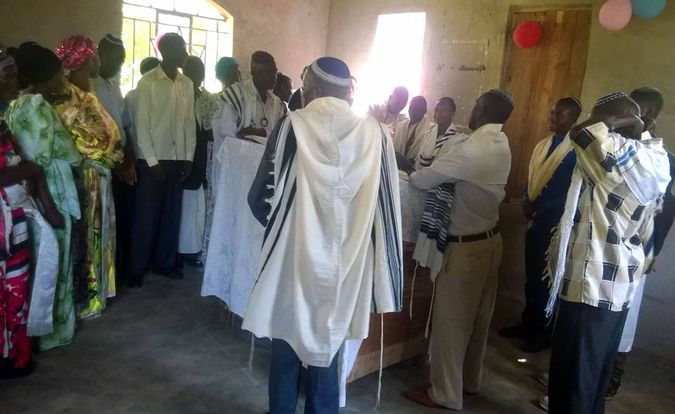 Members of the Abayudaya, the Jews of Uganda, pray in synagogue Image by Mugoya Shadrach Levi

In August, just before I left for Israel, our community was host to a grand ceremony in which five couples — my wife Naomi and myself included — were married. Rabbi Eri, well into his seventies, also took his vows! Amid much pomp and circumstance, the ceremony was officiated by Rabbis Gershom Sizomu from Nabugoye and Yafa Chase from Massachusetts.

In attendance were some 1,500 guests – Jews, Christians, and Muslims – representing a sizeable portion of Magada village’s population as well as visitors from all the other Abayudaya communities. The event was of such significance that Merissa, a journalist present at the wedding, featured the wedding in the Sunday, September 24th edition of the New York Times.

This was the first of hopefully many more weddings to come!

Following the New York Times feature, we are connecting to Jews around the world like never before. This wedding also became an opportunity for all local people to come and eat together as peoples of Hashem, each according to their dietary restrictions.

It is inspiring to see my Abayudaya community in the mainstream consciousness of Uganda, too. NTV, our national television network, now presents coverage of holidays such as Rosh Hashanah and Pesach. We are improving our relations with our Christian and Muslim neighbors, and in our agricultural and infrastructure projects we try to provide for the betterment, not only of the Abayudaya but for everyone in our towns and villages.

We now have a website, and over the last twenty years or so, our existence has been increasingly publicized by American organizations like ALEPH, Alliance for Jewish Renewals (my rabbinic school), Kulanu, Be’chol Lashon, and to author/researchers like Edith Bruder, Daniel Lis, Tudor Parfitt, and Remy Ilona, to name a few.

I am proud to follow a long line of rabbis in Namatumba, the culmination of a history of persecution and perseverance that is now bringing our isolated community ever closer to Jews worldwide.

Mugoya Shadrach Levi is the spiritual leader of the Jewish community of Namutumba in eastern Uganda.

We Are the Jews of Uganda. This Is Our Story.