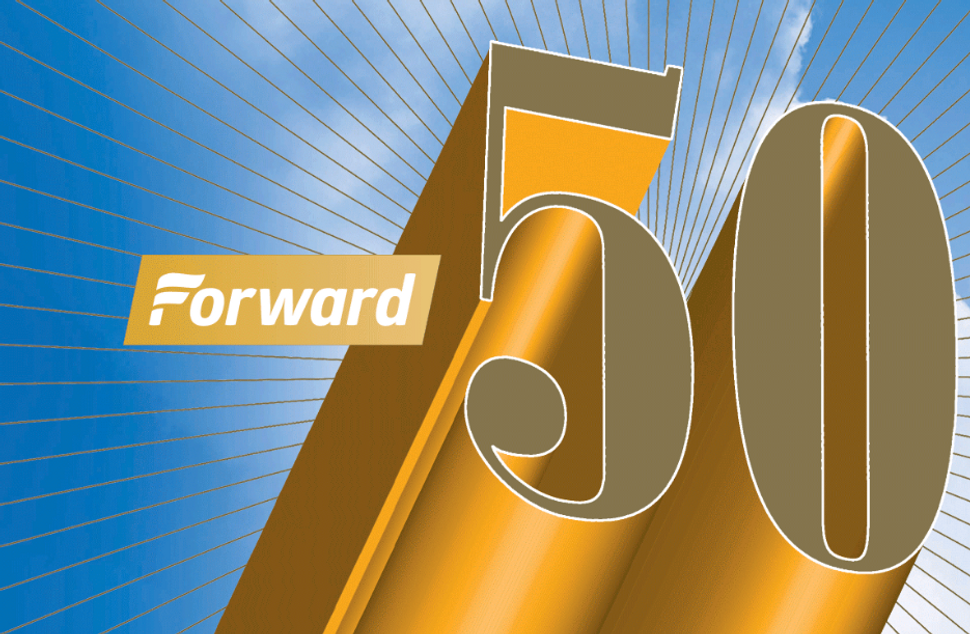 Welcome back to Jane Looking Forward. If you wish to continue reading this weekly newsletter, please subscribe here. And spread the word!**

In 1994, Bill Clinton was in the White House, Benjamin Netanyahu was just head of the Likud party, “Friends” debuted on television, “The Lion King” was still just a movie and Jeff Bezos launched Amazon out of his garage.

As for Donald Trump, well, in 1994 he had only been married twice, only declared bankruptcy four times (two more to come) and was just as brash as misogynist as he is today.

And that same year, Seth Lipsky, founding editor of the English Forward, my predecessor’s predecessor, created something called the Forward 50. Its intention, Lipsky wrote,) was to highlight “the men and women who are leading the American Jewish community into the 21st century.”

We’re well into that century now, and the Forward 50 is as relevant as ever. It allows us the opportunity — so rare in our rushed media landscape — to reflect upon the people who have had a significant impact in our communal and creative lives during the last year, to applaud their work, occasionally to note its less than laudatory consequences, and to marvel at the breadth and depth of the contributions Jews are making to America and the world.

Our newsroom begins the process of gathering and evaluating names in late summer, then expanding and refining the list, doing our best to include a diverse selection of American Jews. Sometimes, we have to scramble: Last year, our print deadline was the morning after Trump’s unexpected victory, and we wanted to make sure our list reflected that political earthquake. Five years ago, we produced the Forward 50 from kitchen tables and cafes around the city, after Hurricane Sandy flooded our offices.

This year, we had to continually adjust the list when American Jews kept on winning Nobel Prizes! How could we not include them?

This year’s Forward 50 will be published in its entirety online starting Wednesday, with a few sneak peaks today and tomorrow. Readers of our monthly magazine should be receiving their copies any moment now.

Open the pages and you’ll find:

The actor who sang “Guys and Dolls” in Hebrew at Camp Ramah.

The award-winning scientist who escaped the Nazis.

The Orthodox rabbi who condemns homophobia.

The Jewish Chinese chef who lives on a family farm in North Dakota.

The comedian who compared herself to Hannibal Lector.

Read. Enjoy. Learn. Be inspired. And have fun.

Honoring the fallen. In last week’s Jane Looking Forward, I pondered whether the distasteful controversy surrounding President Trump’s reaction to the family of Sgt. La David Johnson, who was killed in service in Niger, could have happened in Israel. I argued that it could not, because the military is so integrated into Israeli society and public officials always acknowledge the fallen.

But an alert reader took me to task. “This year at the memorial service for the fallen of the 1973 war in the Jerusalem military cemetery on Mt. Herzl, not even one minister attended,” Galit Hasan-Rokem, a Hebrew University professor, wrote in an email. “There was much anger among the parents and relatives of the dead.”

She’s right. After being lambasted by family members and political leaders, Israeli Prime Minister Benjamin Netanyahu actually apologized for the hurtful snub and vowed it would never happen again.

Please continue to send your comments, questions and corrections to JaneEisnerEIC@forward.com.

What I’ve been reading. Kay Hymowitz, a senior fellow at The Manhattan Institute, often challenges my thinking when she writes about family life, child poverty and the culture wars. She did it again in [this piece](http://www.latimes.com/opinion/op-ed/la-oe-hymowitz-child-poverty-immigration-20171029-story.html in the Los Angeles Times, arguing that the United States’ unusually high rate of child poverty is due in part to our immigration system.

The Washington Post yesterday asked 38 writers, academics, artists and other creative people to suggest how they would fix American democracy. Some of the ideas struck me as so outlandish, they’d never work. Others were things I’ve been saying for years. (See last week’s newsletter, re: national service.)

But there were plenty of other ideas that were surprising and fascinating. One of my favorites was from Amy Sullivan, a Chicago-based journalist, who lamented the way evangelical Christianity silences women’s voices, especially in Trump’s America. “The collapse of moral leadership for a traditional that represents one-fifth of Americans would be an unfathomable loss,” she wrote. “Let the ladies preach.”

Finally, the veteran peace negotiator Uri Savir has a provocative piece arguing that the recent Fatah-Hamas reconciliation agreement actually strengthens Egypt’s role in the region. A welcome development or a worrying one?

Looking forward. I fly to Israel on Thursday on a special reporting trip. More to come.

Correction: November 1, 2017, 2:10pm — A previous version of this article stated that Benjamin Netanyahu was the prime minister of Israel in 1994. He was in fact head of the Likud party. In 1996, Netanyahu became the youngest prime minister in Israeli history.