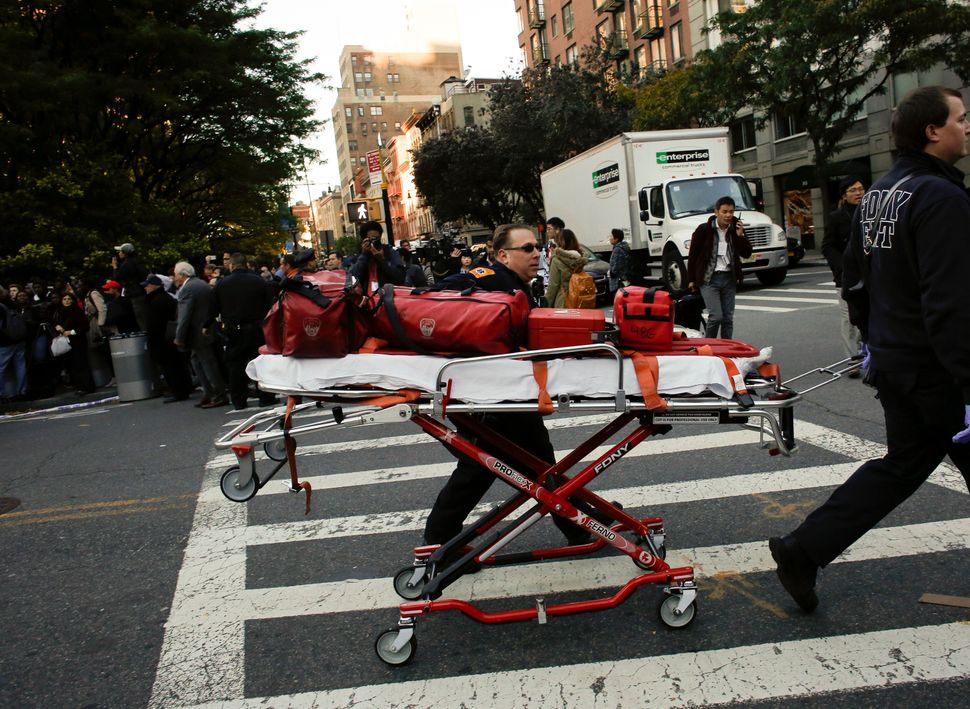 A truck plowed through a New York bike lane, killing 8 on October 31, 2017. Image by Getty Images

How can you truly measure the horror of a terror attack? You can’t. One life lost that way is one life too many.

But not for Donald Trump. When a man murders eight people and injures almost a dozen others in Manhattan, and then shouts “God is great!” in Arabic, the president waited only hours to order the Department of Homeland Security to step up its vetting program, because the alleged terrorist was a recent (and legal) immigrant.

Yet when a homegrown American murders 59 people and injures 500 more in Las Vegas, the president takes no such action. Instead, he said we should all somehow be grateful that the death toll wasn’t worse. And he instructed his spokeswoman to deflect calls for a policy response, saying that would be “premature.”

This is not consistent and moral leadership.

This is political pandering at the expense of innocent lives.

What happened yesterday in Manhattan — blocks away from the Forward offices — left me deeply sad and angry. I heard the sirens racing all afternoon. I felt horrible as the death toll mounted.

I didn’t live in New York City during the 2001 terror attacks, but I’ve brushed up against other incidents here and respect the resilience with which New Yorkers react. People got back on their bicycles; the streets and subways were filled with children dressed up in Halloween costumes — as they should be, damn the terror.

I agree with Trump when he said that the alleged terrorist, Sayfullo Saipov, is a “very sick and deranged person.” Saipov would have to be sick and deranged to do what he did, even if it turns out to be for some twisted political purpose. And if he somehow slipped through the rigorous vetting process and his entry to the United States could have been stopped — well, Trump would be justified in demanding explanations and, if necessary, adjustments to the federal program.

But that sort of careful determination can’t be done in six hours. And it was only six hours after the attack that Trump ordered the DHS to act. “Being politically correct is fine, but not for this!” he tweeted.

Then why wasn’t he similarly moved to act after Stephen Paddock exploded with far deadlier results in Las Vegas last month?

He denounced Paddock as “evil.” Not a word I would use, but I understand the sentiment.

Trump refused, however, to order any institutional response. “There’s a time and place for a political debate, but now is the time to unite as a country,” White House press secretary Sarah Huckabee Sanders said at a press briefing. “There is currently an open and ongoing law enforcement investigation. A motive is yet to be determined. And it would be premature for us to discuss policy when we don’t fully know all the facts.”

Premature? Paddock had at least two “bump stocks” that convert semiautomatic firearms into fully automated ones, enabling him to unleash hundreds of rounds of gunfire on the concertgoers that awful night. Senator Dianne Feinstein, the California Democrat, has for years tried to ban bump stocks.

More than eight in 10 Americans favor banning the devices. Even some Republican lawmakers have called on Congress to prohibit them.

But now, a month later, has anything been done? Has the president used his bully pulpit to potentially save others? Nah. That would be “premature.”

The double standard here is infuriating. When a Muslim immigrant murders, the federal government is ordered to immediately respond. When a white American man murders, all government is asked to do is send messages of condolence.

It’s the president’s job to protect us. And he is failing at that core responsibility as his prejudice clouds what is really happening in America, as he fans terror from without and ignores terror from within.

Sign up here for her weekly newsletter, Jane Looking Forward.