A Modest Proposal: All Palestinians Should Convert to Judaism 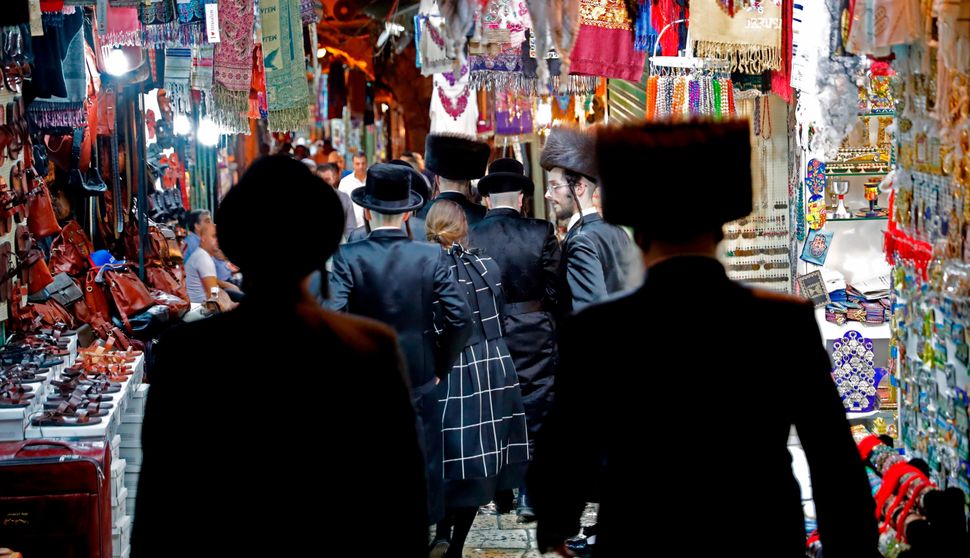 Now that the dust has settled on the commemoration of the Balfour Declaration’s centenary, Israel still has a problem.

It has established a state in what was Mandate Palestine. But it’s struggling to cement its control over the whole of the land, even though, since 1967, it has poured hundreds of millions of dollars into occupying Palestinian territory.

Israel’s issue is not whether the settlements in the Palestinian territories violate international law, or whether its actions might be considered war crimes. No, its real problem is the so-called demographic time-bomb. There are simply too many Palestinians in the land of Israel/Palestine. In fact, the latest figures suggest that there is now near parity between Arabs and Jews — about 6.5 million each.

Israeli politicians are not short of ideas. Defense minister Avigdor Liberman, called for population transfer back when he was foreign minister. Former defense minister Moshe Ya’alon recently proposed that Palestinians continue to enjoy “autonomy” while another million or two Jews are settled in the West Bank. The National Union party, which has members in the Knesset, wants to annex the occupied territories and make Palestinians choose between giving up their national aspirations, getting a generous package to emigrate or being handled with “greater force than at present.”

Clearly, withdrawing from the occupied territories, recognizing a sovereign Palestinian state, and letting Palestinian refugees back home is not in Israel’s cards.

Never mind. I have a far simpler solution. Why not convert all Palestinians to Judaism? In such a scenario, there would no longer be any need for bypass roads in the occupied Palestinian territories, or admission committees to screen out Palestinian citizens of Israel from all-Jewish towns, or the squeezing of Palestinians out of Jerusalem, the Jordan Valley, Galilee and the Negev, all of which is getting Israel bad press. Instead, we would all be Jews.

Mass conversion would also elegantly solve the question of the Palestinian right of return: as Jews, all Palestinians would simply be entitled to return under Israel’s Law of Return, which has been restricted to Jews since the creation of the state.

This is not as impossible a plan as it may sound. Israel is seeking immigrants far afield, no matter how tenuous their connection with Judaism. Indeed, an Israeli government committee recently recommended that Israel introduce a new status for communities in Asia, Africa or Latin America that have some connection to Judaism. They would not be allowed to emigrate just but could stay in Israel longer to explore their “Jew-ish” roots.

But why go that far afield? There are over 12 million Palestinians — descendants of the so-called “non-Jews” of Balfour’s Declaration. They are readily available right here and now, living within Israel or in the occupied territories or as refugees and exiles in the countries bordering Israel and beyond — Palestinians who have a powerful tie to the land and such a longing for it.

An opinion piece in Haaretz even argued that Palestinians are “Lost Jews.” Surely conversion is the way forward.

One has to be careful to do it right, though, as there is apparently a “huge spike” in the number of Jews being “un-Jewed” by the Chief Rabbinate in the past few years. There is even a blacklist of rabbis who don’t get to decide who is a Jew. These and other actions are alienating many Jews in North America from Israel, as is the endless Occupation and discrimination on both sides of the Green Line.

Of course, my simple solution is intended as satire (I say this for the record: one can be so easily misunderstood these days). Certainly, conversion is not what the Palestinian people want to or should have to do to achieve freedom, justice and equality in the land of Palestine/Israel. Nor should the drive for purity of race and creed dominate any state, whether Israel or, for that matter, Palestine and other Arab states.

Injustice and intolerance are at the root of many of the conflicts in the Middle East and elsewhere. The drive for the non-existent “purity” of ethnicity and unanimity of belief is paving the road to calamity in the United States, Europe, and Asia.

For the Palestinian people there is no choice but to continue the 100-year quest for justice and reparations for all the losses suffered as a result of the Balfour Declaration. And it should go without saying, but perhaps needs to be said, that justice for Palestinian Arabs must be achieved without creating injustice to Israeli Jews.

Justice without prejudice, identity without intolerance — this is the only state worth striving for, the only world worth living in.

A Modest Proposal: All Palestinians Should Convert to Judaism