Growing Up Ultra-Orthodox, There Was No Shame In Being Poor 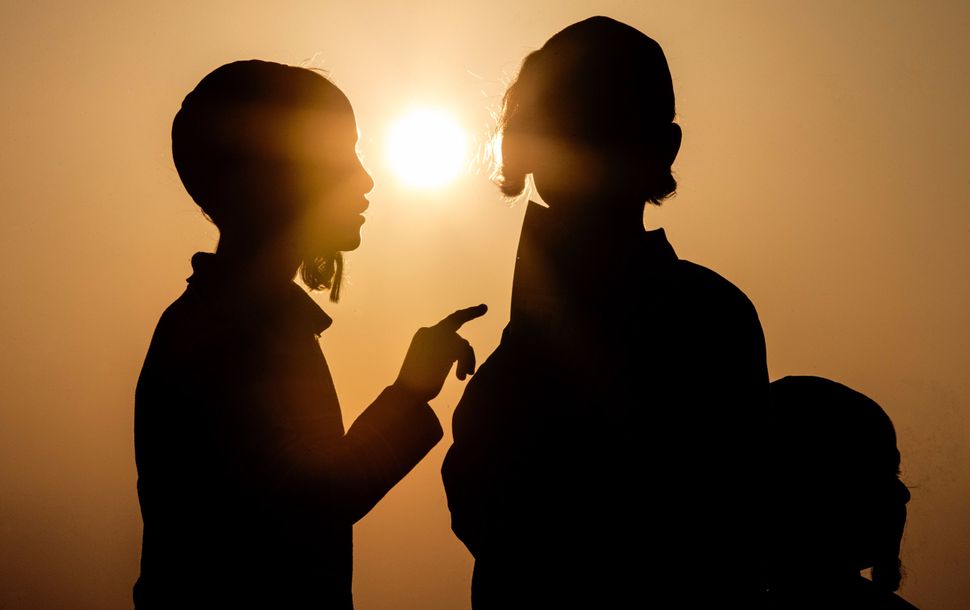 In the ultra-Orthodox community in which I grew up, I was only made fun of once for being poor. I was in seventh grade at a new school. It’s a hard age in general, harder when you move schools two months into the school year. It’s also the year Orthodox Jewish boys become men; we turn thirteen in seventh grade, which means it’s bar mitzvah season.

Bar mitzvah season was when I first realized that I was different. The message came via a fellow classmate whose last name was synonymous with wealth; he wore gleaming new Nikes which he replaced every three months, high tops that exuded cool and confidence. I on the other hand wore shabby Payless shoes, and inherited my clothing from a neighbor’s basement.

I already felt myself lacking when this well-appointed classmate expressed his astonishment that I wasn’t getting a new suit for my bar mitzvah. But I had a secret. I also had a nice suit, a Brooks Brother charcoal grey one with a windowpane pattern.

I got it from the gemach – the charity — a few blocks away from my house. If you walked down a shag-carpeted staircase and into the basement of a pious neighbor’s home, you would find a dimly lit forest of clothing racks and hangers. On half a dozen coatracks hung hundreds of suits fresh from the dry cleaner, separated by size, many still in the plastic wrapping from the cleaners.

These were all donated from a variety of suit gemachs, some official and some just side projects of charitable mothers. Down in the basement, a middle-aged woman would ask me my size and guide me through the maze of clothes, and I would rifle through and find something that seemed sensible. Sometimes, she urged me to try on this suit or that one. I’d use an unfinished bathroom to try on the suits, some of which, despite the dry cleaning, still had the smells of the previous owner, the sweat of late Friday night meals and long Shabbat services.

It was there that I found my bar mitzvah suit that, though not new, was new for me, and very nice.

My bar mitzvah suit embodies a paradox within the Orthodox community. My classmate’s taunting will be familiar to anyone growing up with less in the frum world, a world with a high sticker price. But it’s also a world full of kindness and generosity, like the huge social network that went into procuring me the Brooks Brothers suit.

Because there is such a culture of generosity within Ultra-Orthodox communities, it is somewhat socially acceptable to be poor, hence my single experience with being made to recognize it. You didn’t talk about being poor. You didn’t show it off. But growing up, it was accepted as a misfortune that sometimes befalls Jewish families, for which everyone else should have due sympathy. Community members use the term “tzuris” with solemnity. An illness, a loss of a job, it could happen to anyone, chas veshalom.

And if you were a family to whom tzuris had befallen, you would be offered everything from food to clothing, care of the community. For in ultra-Orthodox communities, giving is, well, a given. Every prayer service is interrupted by panhandlers who run from shul to shul collecting money. After services, men from Israel make ethos-driven appeals about the death of breadwinners of large families, illnesses of children, money for surgeries, etc. And congregants hand over gobs of cash. Twenties fly out of pockets.

Every Thursday evening and the eve of holidays, trucks and minivans silently drive around New York and drop off boxes of food – chicken, grape juice, bread, and a variety of other foods so that families can eat. Women open their homes to create makeshift food pantries where local women come to stock up on just-expired goodies like candy, soap, usually reserved for the people who can afford it. Masbia, a “kosher restaurant”, is not quite that. It’s the pay-what-you-can operation, designed to give the needy the proper respect and pride that that a regular soup kitchen might not offer.

Even when it comes to the dreaded day school tuition, school administrators would rather give a student a free ride if he sits in front of a book of Talmud all day than send him to a weaker school that’s less religious.

My high school’s administrative manager called my father once a year to ask for tuition. The conversation was always the same. Business was bad, and my father could not afford the tuition. The administrator would not call again until the following year.

I am forever indebted to my school for making it a process that respected my parents and didn’t make me feel, as a student, different from my classmates.

Years after I graduated high school and repressed all memories of Yeshiva, I saw my former wealthy classmate’s name in the classified section of an ultra-Orthodox magazine. It was a wanted ad, looking for suits to add to his collection. He has started a gemach.

Growing Up Ultra-Orthodox, There Was No Shame In Being Poor