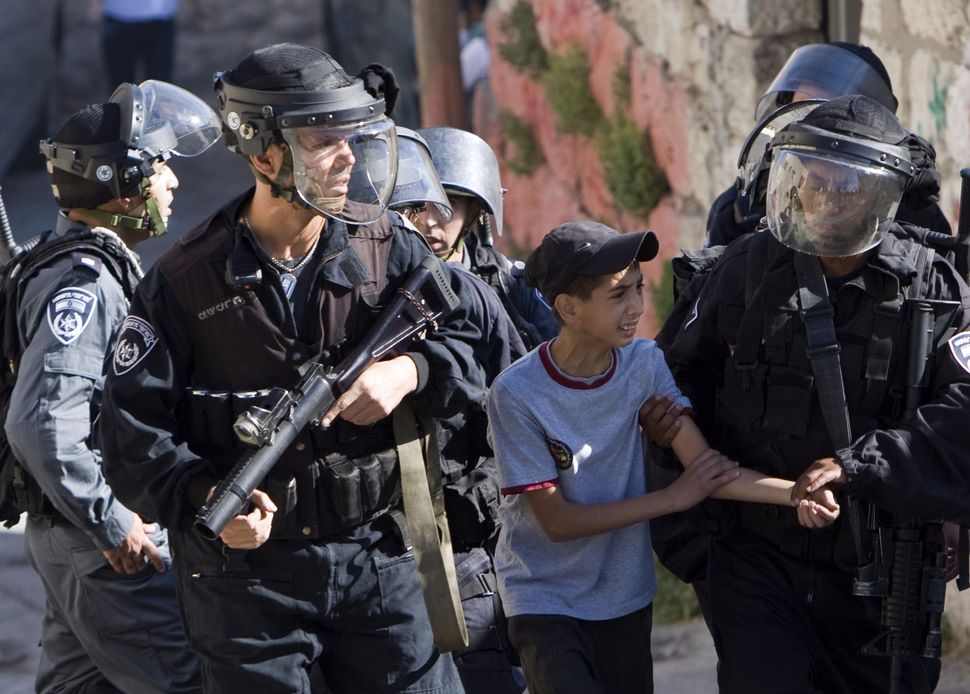 As a Palestinian human rights defender, I have been arrested by Israel more times that I can count. I have been beaten, stripped and left outside in the cold, and my family has been threatened with violence. During one of my arrests in 2015, I spent five hours handcuffed to a toilet in a filthy bathroom. The soldiers would enter, cock their guns at me and yell, “I will kill you the way ISIS kills.”

But the worst arrest was the time I was arrested with a group of Palestinian children. And the memory I have of that arrest still causes me pain — more pain than the injury to my lower back that another brutal arrest left me with.

It was March 2013. President Obama was landing in Tel Aviv that day, and we were hoping to get his attention so he would come visit us in the West Bank city of Hebron. Had he come, he would have witnessed with his own eyes the most blatant forms of the West Bank Israeli apartheid: the numerous military checkpoints, the streets where no Palestinians are allowed to go, the neighborhoods that are locked behind cages, gates and armed soldiers — and the heavy air of hatred directed at us daily under Israeli military rule.

On that day in March, we led a demonstration down Hebron’s streets. Half us wore Obama masks, while the other half wore Martin Luther King masks. Our shirts said “I Have A Dream”.

But while we were still a long way from our destination — Shuhada Street, the most notoriously segregated street in Hebron — a number of us were grabbed by Israeli soldiers, thrown to the ground and arrested.

I was placed in the back of an army jeep with six Palestinian children between the ages of 10 and 13. They hadn’t been part of the demonstration; the children had come out to observe, curious as children all over the world are. Nonetheless, they were blindfolded and handcuffed along with the rest of us.

They were clearly terrified; many of them were crying. Under Israeli law, once at the police station or army base, arrestees are supposed to have their handcuffs and blindfolds removed. This law was disregarded. That the children, who had not been part of the demonstration, remained blindfolded and handcuffed, showed not just a blatant and willful violation of the law, but real cruelty on the part of the Israeli forces.

I felt grateful I was able to be with them, since Palestinian children rarely have an adult to help them through the arrest and detention experience. But I am still haunted by what I couldn’t teach them in that short van ride.

I am used to being humiliated and terrorized during these arrests. I am accustomed to the abuse of the Israeli police and army. And as a result, I know how to maintain my dignity and preserve my resolve. I know how to curb my hunger and hold my bladder.

These are things you can’t teach 10 year olds in a short van ride. Time passed and they remained blindfolded and shackled, paralyzed with fear. They were denied food and the use of the bathroom. A number of them soiled themselves as they cried for their parents.

When I protested on behalf of the children, the soldiers shouted at me and tightened my handcuffs further until they dug into my wrists. Finally, I managed to reach one soldier’s heart. He removed the children’s blindfolds and handcuffs and allowed them access to the bathroom. But then the next squad of soldiers replaced those on duty and the children were put back into handcuffs and blindfolds.

According to Defense for Children International, Israel prosecutes between 500 and 700 children each year in military court, without fundamental fair trial rights. This applies to children as young as 12 years old. By the age of 16, Palestinian children are defined and prosecuted as adults. This is in contrast to the status of Israeli settlers and their children, who live under Israeli civilian law where the age of adulthood and prosecution is 18.

Three out of four Palestinian children experience physical violence during their arrests and only 10% meet with a lawyer, according to a UNICEF report. They are often taken from their homes — actually seized from their beds — by Israeli soldiers, during terrifying raids in the middle of the night. They are denied access to their parents and are subject to harsh interrogations without legal counsel. Frequently, they are put in solitary confinement as a way of breaking them psychologically and emotionally.

A 2013 report published by the Department of State found that Israeli security services abuse, and in some cases torture, minors to coerce confessions of stone throwing.

I myself have heard children being asked, “Do you want to see your mother? Confess to throwing rocks and we will let you see your mother right away.”

They have to force these confessions because young children are often not the rock throwers themselves; rather, they are the easiest targets for soldiers to catch and load into the back of their military jeeps. Then, upon being promised they will get to go home, these children sign their names to confessions written in Hebrew, which they cannot speak or read. Instead of release, though, they are taken to the detention center and booked. Many of the detention centers are located inside Israel, so their families must apply for a special permit to visit them. Often, the permits are delayed or denied.

While I do not expect Israel to change its practice of detaining and terrorizing Palestinian children, the US has the ability to make an impact. Last year, just before President Obama left office, he approved a budget of $3.8 billion a year in military aid to Israel for the next ten years. Billions of dollars are being received by the Israeli military, regardless of how many Palestinian children they detain and abuse in prison or prosecute in military court. But this reality could change.

Today, we received reason to hope. Representative Betty McCollum of Minnesota, along with nine co-sponsors, introduced a groundbreaking bill. It’s called the “Promoting Human Rights by Ending Israeli Military Detention of Palestinian Children Act” and it aims to protect the rights and lives of Palestinian children.

This bill would require the Secretary of State to certify each year to the House and Senate Appropriations Committees that none of the funds the US provided during the previous fiscal year were used in ways that abused Palestinian children per the standards of international law. Specifically, it would prevent Palestinian children from being subject to torture or physical violence, including restraint in stress positions, hooding, sensory deprivation, death threats, solitary confinement, detention without charge or trial, lack of access to parents or legal counsel, and confessions obtained by force or coercion.

McCollum’s bill won’t end all of the abuses of the Israeli military court. It won’t change the fact that I am, right now, undergoing a military trial, facing a 99.74% likelihood of conviction and imprisonment for, as Amnesty International described, such “baseless” charges as gathering with more than ten Palestinians for peaceful political purposes, organizing peacefully against the occupation, and being in closed military zones.

Representative McCollum’s bill also won’t get the Israeli settlers out of Hebron or stop US military aid from being used to purchase Lockheed Martin fighter jets that bomb and murder Palestinian civilians in Gaza. However, this bill represents the first step towards protecting the most vulnerable among us in Palestine as we continue to live under and struggle against Israel’s oppressive 50 year military occupation of the West Bank and Gaza.

If the bill passes, perhaps the next time I am arrested with Palestinian children, the soldiers will think twice before putting them in handcuffs and screaming at them to the point that they soil themselves.