No, You Can’t Be A Feminist And A Zionist 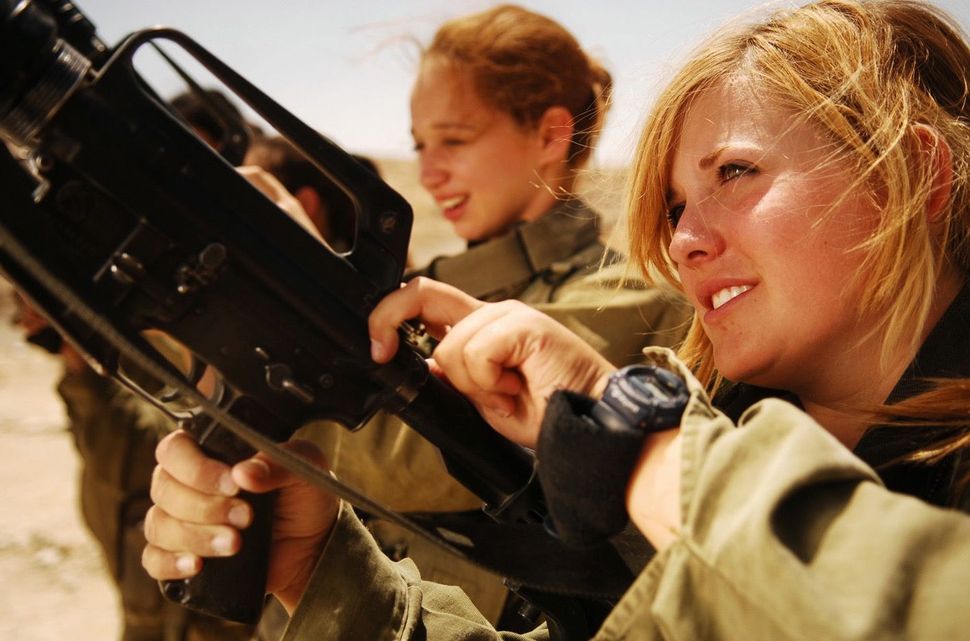 Near Qalandia checkpoint in the West Bank, I watch as two female Israeli soldiers fire tear gas at a crowd of protesting Palestinian youths. One canister ricochets, hitting a young boy in the arm. The soldier who was shooting begins to laugh. Her colleague proudly pats her shoulder as they both reach to refill their weapons.

At that moment, I feel the forbidding consequences of oppression familiar to every Palestinian. But I also feel betrayed as a woman. I had faced these soldiers woman to woman, naively thinking we were supposed to be united in the struggle against patriarchy. Yet here I am, watching them enforce it.

As feminist author Bell Hooks notes, patriarchy is a complete system of domination. The feminist struggle is against not only patriarchy’s alarming sexism, but also all forms of oppression.

It’s a message I’ve long been absorbing through the teachings of my own mother, who constantly guided me to practice an inclusive and intersectional feminism. She often warned me that I must recognize the powers of domination in all of its manifestations, including within Palestinian society, if I aspire to implement genuine feminism.

Through her teachings and my own experiences, it became clear to me that Zionism, as it has been perpetually expressed in Palestine, contradicts the core of feminism in its execution of its oppressive policies.

When I hear anyone championing Zionism while also identifying as a feminist, my mind turns to images of night raids, to the torture of children and to the bulldozing of homes. But I also think of those female soldiers who casually partake in it all, including ex-Israeli soldier and “Wonder Woman” Gal Gadot, who expressed her love and support for the Israel Defense Forcesas they bombed and killed thousands of Palestinians in Gaza in 2014.

Being a feminist and a Zionist is a contradiction in terms because the Zionist feminist is complicit in propagating supremacy and domination over a people on the one hand, while on the other hand calling for an end to patriarchy.

Indeed, the Zionist feminist is reminiscent of another kind of feminist: the white feminist. Women of color have been historically marginalized within the feminist movement, mostly due to white women stifling racial justice issues and de-emphasizing the specific oppressions faced by people of color because of their race, ethnicity and class. This negligence was often justified as working for collective sisterhood. But as Hooks eloquently explains, “As long as women are using class or race or power to dominate other women, feminist sisterhood cannot be fully realized.” Fundamentally speaking, feminism cannot support racism, supremacy and oppressive domination in any form.

Zionism is often preached as a call for a Jewish homeland to ensure that the horrors of anti-Semitic oppression do not occur again. In this simplified narrative, however, what is obscured is the fact that this quest for a homeland was initiated by a colonizing agency, which meant ipso facto appropriating land and culture, and dispossessing the people who lived in the region for thousands of years. These land thefts and violations of human dignity and international law continue in the name of Zionism on a regular basis, perpetuating the suffering of an entire population and the denial of their basic human rights on the premise of ethnicity and race. This is why I am weary and distrustful of the Zionist feminist. She willfully ignores that Zionism has advanced itself through myriad human rights violations.

I recall moments when I, myself, was detained by Israeli forces after I protested against a soldier firing tear gas directly at young Palestinian children. While I expected the degradation, I was baffled and angered by the female soldiers. It was they who carried out my detention, putting on and taking off the handcuffs, brutalizing me, calling me foul names and saying nothing as the male soldiers verbally and sexually harassed me, calling me “whore” and “dog.” The women would shy away for a moment, only to return and laugh alongside their colleagues.

Feminism emerged to fight the silencing and exploitation of women, confronting the powers that suppress and control an entire segment of the population. What continues to happen in Palestine under the banner of Zionism is exactly this, the silencing of an entire population and the banning of protest in the face of violent territorial annexation.

Israel is engaged in mass incarceration of Palestinians, and a besiegement of whole towns and cities. Palestinians have been occupied for more than 70 years, and Palestinians with Israeli citizenship face more than 50 discriminatory laws.

Calling yourself a Zionist feminist means granting de facto support to patriarchal domination, as Israel embodies the same roles and techniques that have long been, and continue to be, used against women.

Being a Zionist today means giving support not just to the idea of a Jewish state and Jewish sovereignty, but also to Israel’s actual policies as they are manifested on the ground. More specifically, Zionism means maintaining the liberties and privileges of Israeli Jews at the expense of Palestinians, including those in the global Diaspora longing to return.

It is when I consider all of the above that I find myself returning to Hooks, who wrote that “a genuine feminist politics always brings us from bondage to freedom, from lovelessness to loving.” Feminism cannot be selective. Its framework comes from true and absolute liberation not just of women, but of all peoples. This is why Zionism and feminism cannot merge. A feminist who is not also anti-colonial, anti-racist and in opposition to the various forms of injustice is selectively and oppressively serving the interests of a single segment of the global community.

The alternative I am suggesting to the Zionist feminist is to recognize and join the struggles against systematic oppression. Be brave enough, and stand against the many faces of subjugation and inequality, and embrace feminism as the all-encompassing and formidable force that it can be.

No, You Can’t Be A Feminist And A Zionist