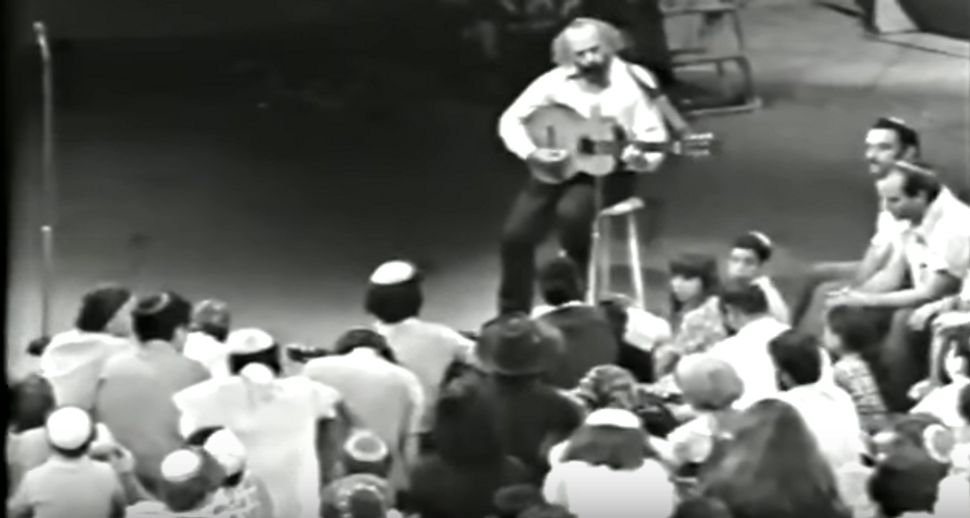 That’s because my mom is one of the many of girls and young women whom Shlomo Carlebach sexually harassed, assaulted or abused while he traveled the country performing his music.

In 1998, Lilith Magazine published a longform article about Carlebach’s history of sexual abuse, documenting testimonies from women he abused. I first read the article when I was around 16. That’s when I finally understood that my mom’s story was just one of many, and the problem was much bigger than I could have imagined.

The same look always comes over my mother’s face any time Shlomo Carlebach’s name is mentioned. It’s a knowing glance she and my dad will share. Once, when I was a young girl, I sang my mother a melody I’d learned at Hebrew school, and when I mentioned it was a Carlebach tune, I saw that cold, disgusted look cross her face.

I demanded to know why.

My mother told me that she’d met Carlebach while he was traveling the country, that he came to a neighboring synagogue in Miami, where she attended a Shabbaton with him. She was 14 or 15. She said he’d touched her inappropriately. I didn’t really understand what that meant, but I pressed, and she told me it was a “hug that went too far” and something about him mumbling to her in Yiddish. She used the phrase “dirty old man.”

When I read that Lilith article, I saw how my mother’s story fit into a much larger pattern.

Over the years, almost every time I have brought this up in a group of Jews, someone else – a coworker who overheard from the next office, a woman I’m friends with – would share a similar story from her mother, aunt, or friend. My mother-in-law, an avowedly secular Argentinian Jew who has lived in Jerusalem since the 1970s, was completely nonplussed when I mentioned this to her. “Everyone knows about that,” she said.

Yet despite the fact at least some of the stories of the women and girls Carlebach abused became public during his lifetime, and despite the fact that his pattern of sexual misconduct has been an open secret for decades, the Jewish community as a whole has reacted with little more than a shrug.

Despite the fact that I knew this man had assaulted my mother, I kept hearing his songs at my synagogue, in my youth group, at summer camp.

My mother says that she doesn’t feel traumatized by the incident, mainly because she was able to push him off her and run away. But seeing indifference and inaction from the Jewish world that embraced Carlebach in the face of rampant reports of his sexual misconduct fundamentally damaged her trust in Jewish institutions.

Hers – and mine. Because that collective shrug endures in Jewish institutions as much as Carlebach’s songs do in prayer services.

How would the Lilith article be received if it were written today? How can we reconcile the extensive reporting and the many women who have spoken up over the years with the fact that his music is still almost universal in our prayer spaces, yet his documented history of abuse is not?

For those who survived his abuse, the Jewish community’s response has been devastating: “It’s not that we don’t believe you; it’s that we don’t care.”

If the Jewish community is going to take seriously its responsibility to provide safety and some measure of justice to survivors, we must reexamine our use of Shlomo Carlebach’s music.

A Jewish community strives to be a spiritual and communal home, a place of safety and reflection, celebration and mourning, healing and prayer. The kind of intrusion Carlebach’s music represents for his victims into such an intimate and sacred space is particularly cruel. And it’s time it should stop.

There are many reasons I have all but stopped attending services. But it is at least a contributing factor that every prayer space I enter – from my hometown Conservative synagogue to the independent social justice havurah my friends run in D.C. – includes Carlebach music. While everyone around me is rapturously and spiritually engaged with the music, I sit there wondering whether those people know what Carlebach did to my mom, and to lots of other girls and women. And as I think that, I don’t know which is worse: that they don’t know because the issue has been so effectively sidelined, or that they do know, but don’t care.

My mom would put it more kindly: they may know, but they don’t know how to deal with it, because the leaders of our Jewish institutions have failed to address the problem effectively or at all.

Last year, I raised this idea on Facebook, unsure what kind of reaction I would get. Two friends seemed to particularly take my perspective to heart. Both lead independent havurot in Brooklyn and D.C. They and a few others – mostly younger Jews who are active leaders of a range of havurot, minyanim, and other Jewish religious spaces — created a Facebook group called “Anything But Carlebach.” The group’s description says, “This is a place for NEW and OBSCURE Jewish liturgical music. We only have one rule: NO CARLEBACH.” It has seven hundred members. They’ve planned and led Shabbat and High Holiday services that include joyful, rich, wonderful Jewish music without risking traumatizing or alienating members of their communities.

Rabbis, synagogue presidents, and communal leaders should take after their example. A moratorium on Carlebach’s music would be a powerful way to start. Without it, it’s hard to imagine survivors of sexual assault will take any such efforts seriously. And doing so would set an important precedent, one based on action, with love and care toward survivors, instead of just sweeping problems under the rug.

Sharon Rose Goldtzvik is the founder and CEO of Uprise – communications consulting for good guys (of all genders). You can follow her on Twitter @sharonroseg.

Sharon Rose Goldtzvik is the founder and CEO at Uprise, a consulting practice for good guys (of all genders).