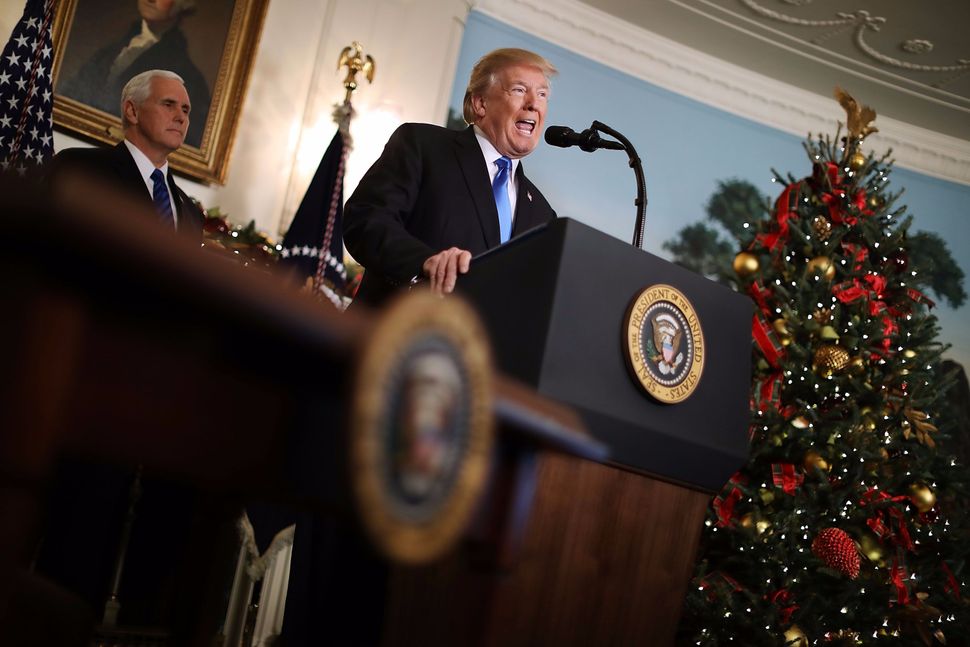 Yesterday, President Donald Trump did the incomprehensible: He recognized Jerusalem as the capital of Israel.

Never have the divisions been more clear-cut. The entire Arab world and the rest of the international community have opposed, condemned or expressed grave concern about Trump’s Jerusalem recognition announcement. So did the American Jewish and Israeli peace camps.

All argued that the announcement would work to the detriment of any American-sponsored peace process.

Palestinian anguish was particularly acute: sacred space was being violated.

The right and center of the Israeli political establishment, representing a large majority of Israelis, were delighted. Jerusalem has for thousands of years been the capital of the Jewish people. It has been modern-day Israel’s capital for nearly 70 years. Trump had finally stated the obvious and unmasked the world’s prolonged hypocrisy.

But one unanswered question that many have posed is why. Why now? What does Trump stand to gain from this declaration?

The question is especially acute when one realizes that when the smoke clears, all sides will see that nothing has changed on the ground. Trump pointedly delayed the opening of an American embassy in Jerusalem. If he so desired, he could open an embassy in Jerusalem in half an hour, merely by replacing the US consulate sign on the building on West Jerusalem’s Agron Street with one designating it an embassy. Instead, he deliberately set in progress a process that will take years.

True, unilateral US recognition seemingly alters the negotiating balance when it comes to discussing Jerusalem in final-status negotiations. Yet, ostensibly, so did the broad international recognition of a nonexistent “Palestinian state” in recent years. So what? After all, there are no negotiations. Even when there are (as in 2008 or 2013-14) the gaps between the two sides remain unbridgeable.

Now Trump is offering to “support the two-state solution if agreed to by both sides”? But that is precisely the dilemma: the two sides can’t agree. “The two-state solution is over”, declares the PLO’s Saeb Erekat in anguish in response to Trump. Erekat needed Trump’s Jerusalem declaration to realize this?

And that, I fear, is the real point of Trump’s December 6 speech. From everything we have been able to glean, the much ballyhooed Trump Middle East peace plan scheduled to be unveiled early in 2018 will be a total non-starter. It will be rejected by the Palestinians precisely because it does not deal with Jerusalem in the way they want (two capitals) and does not give them a state in anywhere near the entirety of the West Bank and Gaza Strip. Instead it tries to buy Palestinian concessions with Saudi money. By now it should have dawned on Messrs. Jared Kushner and Jason Greenblatt, the vanguard of Trump’s vaunted peace team, that “economic peace” has never worked with Palestinians. This is definitely not an economic conflict.

Accordingly, Trump himself has nothing to lose and everything to gain by recognizing Israel’s capital. If the Palestinians respond by cutting peace process discussions, they are to blame, not Trump. They save him the dilemma of whitewashing failure sometime next year. Israeli Prime Minister Netanyahu, too, would be happy to see Trump’s peace process initiative torpedoed by Palestinian anger over Jerusalem.

Besides, both Netanyahu and Trump face serious legal challenges at home: Netanyahu over corruption charges, Trump over the Russia connection. It was no accident that Trump’s Jerusalem speech was timed for eight in the evening, the prime TV news hour in Israel.

The Jerusalem declaration’s timing enables each leader to rally his base behind a largely empty distraction. Trump has a “strategy” for Jerusalem even if he doesn’t have one for North Korea. He keeps election promises that countless predecessors made then ignored. Netanyahu can take credit for U.S. recognition of Jerusalem even as he guides Israel down a slippery slope toward an ugly non-democratic one-state reality. He is already redrawing the borders of Jerusalem to keep it “Jewish” by reducing its Arab population and enlarging its Jewish municipal voter list.

Yet this is precisely where the two part company. Trump, following in Obama’s path, is broadly pulling the US out of the Middle East. Hence he can allow himself to change the Jerusalem status quo while simultaneously calling on Israelis and Palestinians to maintain it.

Netanyahu, in contrast, wants to continue, with Trump’s backing, to improve relations with the Sunni Arab states against the backdrop of the looming Iranian threat. But Palestinian violence and rejection of a peace process in reaction to Trump’s Jerusalem move jeopardizes the Israel-Sunni Arab rapprochement. A White House declaration generated more by the president’s ego than by constructive strategic thinking is likely to ignite violent Palestinian protest on the one hand and to inspire Israeli’s ruling ultra-nationalists to gobble up additional West Bank territory on the other.

The Saudis won’t like either development. If I were in Netanyahu’s shoes I would be particularly worried about the reaction in neighboring Jordan with its large ethnic Palestinian population and flourishing Islamic movement. Still, as Netanyahu well knows, the Arab Middle East — Palestinians included — has become hopelessly dysfunctional in recent years. Neither Netanyahu nor Trump can change that.

Trump doesn’t live in Jerusalem or the Middle East. Israelis do. In the best case scenario, Trump’s gesture will have little or no effect in Israel beyond empty gestures of recognition of Jerusalem by ultra-nationalist leaders in the Philippines and Czech Republic. They are sucking up to Trump, not Bibi.

Yossi Alpher is former director of Tel Aviv University’s Jaffee Center for Strategic Studies. His most recent book is No End of Conflict: Rethinking Israel-Palestine.