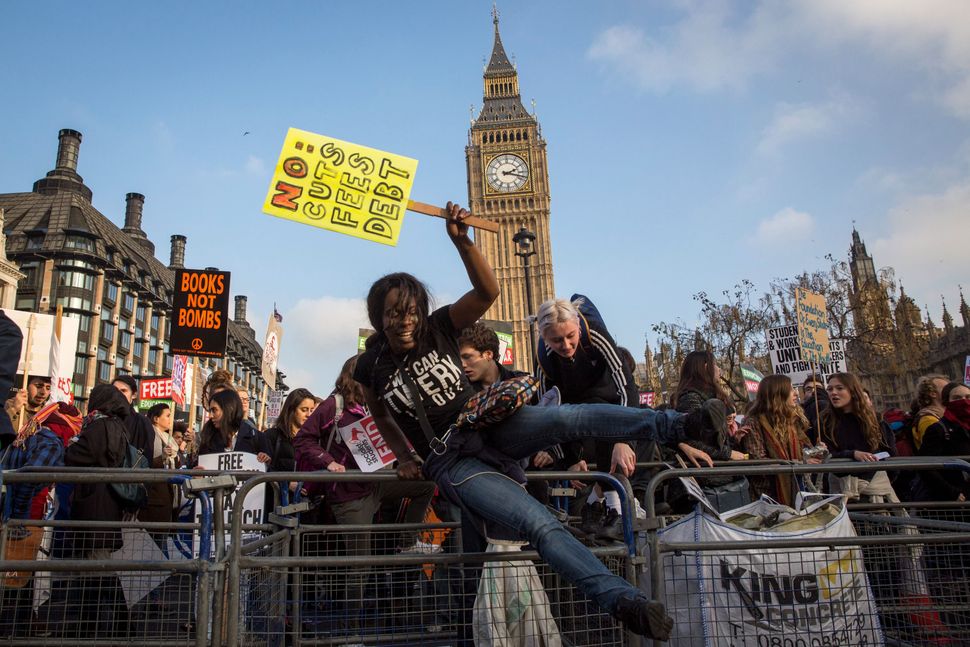 Israel is a controversial issue in Britain and Jewish students are feeling its ramifications.

The British Union of Jewish Students, the sole body that exists to represent Jewish Students in the UK, has always run social and religious programming. But its raison d‘etre has long been defending Israel on campus.

Since Zionism became hegemonic amongst British Jews in the 1950s and 60s, and since Zionism became controversial in Britain in the 1970s, UJS has been firmly Zionist, devoting its energy to combatting anti-Zionist motions and campaigns at both campus and national levels. Candidates for UJS president have historically taken this a given, which meant that they were unable to run policy campaigns – the policies would be the same. Instead, they tended to run on personality.

But in the last two years, something has changed. In an exciting development, students are standing for elections who represent not the majority of the British Jewish community, but rather its changing nature.

Both this year’s and last year’s elections have included candidates with policies diametrically opposed to those traditionally taken by UJS. Eran Cohen, who contested and lost last year’s election, and this year’s contestant, Annie Cohen (no relation), are explicitly non-Zionist. This means that the two Cohens reject the pro-Israel policies that are axiomatic for most UJS candidates, and indeed for most British Jewish institutions.

Eran Cohen based his campaign on a five part plan that included focusing on Diaspora outreach over connecting with Israel. He called it the “Balfive Declaration”, a parody of Arthur Balfour, the British Foreign Secretary who first tied Britain to a pro-Zionist stance in 1917. He was also explicitly pro boycott, divestment and sanctions of Israel. He put out a BDS call, but for “Beigels, Dreidels and Socialism”, implying that his advocacy for a boycott of Israeli products was tied to a diasporist form of Jewish identity..

Annie Cohen’s manifesto calls for UJS to affiliate with Jews for Justice for Palestinians, the UK equivalent of Jewish Voice for Peace. She also demands that the Union ‘stop sidelining anti-Zionist, non-Zionist and Zi-curious students’.

Both have run energetic campaigns, backed by activists from Jewdas, the anarchic British Jewish collective that has been organizing parties and protests since 2005.

Neither of the two Cohens represents a majority of British Jewish students. Eran Cohen received just under 10% of the vote last time, and Annie Cohen is likely to do similarly — although the London based Jewish News has warned of the possibility of an upset, reminding readers that the notion of radical socialist Jeremy Corbyn being elected Labour leader was once totally laughable.

What is interesting is that these candidates are on the ballot paper at all. At one level, it is due to the fact that the Union is actually pretty democratic, allowing any candidate with ten nominations to stand. Policy is decided equally democratically, at an annual general meeting in which everything is up for grabs.

Such campaigns would be far less likely to occur with the Board of Deputies, the supposedly ‘representative’ body of British Jews, as only the 200 or so Deputies have a right to choose the President, and the methods of electing the deputies are pretty questionable. Nor could it occur with Hillel International, whose board of Directors is appointed rather than elected, thus leaving its anti-BDS ‘Standards of Partenership’ policy immune to democratic challenge.

Just as interesting is that there are students willing to run these radical campaigns. Given how far their politics are from the current positions of UJS, it would be far easier for them to disengage from Jewish student life altogether and campaign for Palestinian rights through the many campus Friends of Palestine societies.

But their Jewish identities are sufficiently strong for them to refuse this path, choosing to fight within UJS and try to convince Jewish students of their positions.

This, while challenging, is not impossible. Both Cohens have been strong on other areas important to Jewish students, taking a tough line on anti-Semitism, calling for UJS to campaign for free education, to fund mental health services and to give bursaries for Jewish students in financial need. At a recent town hall in Manchester, Annie Cohen promised to “review UJS finances in order to divert funding away from Israel tours to student welfare services and hardship grants”.

Indeed, rather than an aberration, the existence of students like this may reflect changes in the Jewish community in Britain in recent years. Jewdas has created space for radical Jews to meet, practice Judaism, and organize politically together. As a result, Jews who take non-Zionist or socialist political positions feel less isolated from the community and more in touch with their Jewishness.

At the same time, the organization Yachad has created a space particularly for young people who wish to express criticism of Israel within a Zionist environment. Though loosely aligned with J-Street, Yachad is in reality significantly more radical, campaigning on issues of house demolitions and military courts in the occupied territories.. Yachad has created a significant political space well to the left of Zionist organizations like the Jewish Leadership Council, the British equivalent of the Council of Presidents, while at the same time being seen in the community as “kosher”.

In parallel to these developments there has a been a growth in right-wing Jewish organizations, in particular the proliferation of regional “Friends of Israel” groups that eschew more nuanced defenses of Israel in favor of full throttled support for Netanyahu’s agenda.

In other words, British Jewry is turning into a less coherent community; left-wing organizations like the Jewish Socialist Group have existed for decades, but only now is there is a serious push by radical organizations to fight within existing communal structures, forcing mainstream bodies to take them seriously.

Perhaps we are moving closer to the US Jewish Community in which public debates between the likes of AIPAC, J-Street and Jewish Voice for Peace are simply the norm

Much ink has been spilled on the issue of left-wing anti-Semitism in the UK in recent times. But many of the arguments over anti-Semitism, and the extent of it, actually reflect arguments in the Jewish community itself; over questions of what being Jewish means, of whether we define ethically or religiously, of whether or not we remain an oppressed minority or whether we, as a community, have become privileged and prosperous.

These UJS campaigns are part of those ongoing arguments, none of which are likely to be resolved any time soon. Despite their shock value, Annie and Eran’s campaigns in fact bridge both sides of the debate, simultaneously acknowledging the ongoing reality of anti-Semitism and the existence of Jews who are poor and underprivileged, while realizing that British Jews are collectively strong enough to help other groups, particularly migrants and British Muslims, who suffer so much ongoing Islamophobia.

Even if their chances are slim, these candidates are opening up difficult but necessary debates within the British Jewish community. For that, they should be celebrated.

Joseph Finlay is a writer and musician. He was formerly Deputy Editor of the Jewish Quarterly and writes on politics, Judaism and culture.