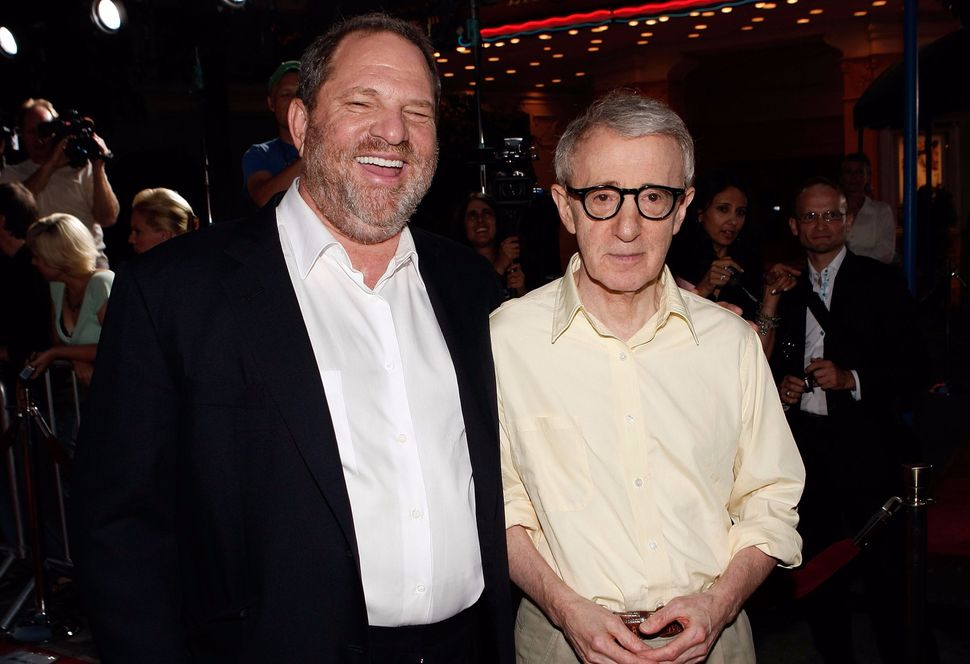 Yesterday, Dylan Farrow published a brave and important op-ed in the LA Times, asking why the “#MeToo revolution,” which has exposed the horrific behavior of entertainment industry figures like Harvey Weinstein, has spared her father, Woody Allen, whom she has alleged sexually assaulted her when she was seven. It’s a devastating article which reminds its readers that Dylan’s story has never changed, and that “Allen has used the same defense-through-intimidation techniques that Weinstein allegedly did.”

And yet Farrow observes that actresses who have condemned Weinstein have shied away from passing judgment on Allen, and continued to make movies with him.

I want to propose a partial answer to Farrow’s question: Allen has been spared by the #MeToo revolution because he is a Jewish icon who has been accused by a non-Jewish family member.

Growing up Jewish, I learned, like so many others, to be sensitive to the notion that anti-Semitism may account for unwarranted criticism of other Jews. This lesson is not unfounded in truth. Anti-Semitism is real, and like other forms of oppression, it must be fought. This protective impulse is exponentially greater when the figure is an actor, comedian, and director who has created important films that cast Jewish men as sympathetic, desirable, clever protagonists.

But when that accused figure makes veiled allusions to the role anti-Semitism is playing in accusations against him, it becomes even more fraught for the Jewish community to navigate. Significantly, while Allen has never explicitly attacked his daughter, he has, time and again, used his Jewishness — and non-Jewishness of both Dylan and Mia Farrow — in his defense.

In 1992, Allen said the following of Mia Farrow during an interview on 60 Minutes:

“I started getting phone calls all night long, and death threats, and… calling me the devil and evil incarnate, and… she ran out and adopted two kids, and suddenly ran out and you know, baptized a number of kids.”

For Allen, securing the sympathy of his audience involved portraying Farrow’s behavior as hysterical, which just happened to involve the conflation of her (ostensibly inauthentic) embrace of religion and her characterizing him as “the devil.”

He portrayed Mia Farrow as a spurned lover and hysterical false accuser. But he also portrayed her as a familiar, trite, American Jewish archetype: the crazy shiksa. This rhetorical strategy has helped to confuse the narrative: was Allen credibly accused of sexual assault, or was he the victim of an anti-Semitic smear campaign by a jilted, non-Jewish ex-partner?

But this was just the beginning.

A year later, in 1993, Allen suggested that Connecticut police were wrongfully persecuting him. He asked, “Is it possible they were prejudiced against me because I’m a diehard New Yorker and Ms. Farrow a Connecticut local?”

Allen’s language here is reminiscent of his recent suggestion that allegations against Weinstein might yield a “witch-hunt atmosphere.” New Yorkers are not typically the victims of prejudice on account of being New Yorkers. It’s the particular type of New Yorker that Allen has made a career of representing on film for decades – Jewish and secular – that would, hypothetically, be more vulnerable to prejudice.

The fact that Allen has intimated that anti-Semitism accounts for the allegations has a chilling effect not merely on Jews passing judgment on Allen, but on non-Jews as well. It puts every observer in a difficult position: if we believe Dylan, are we participating in the demonization of a Jewish icon?

If there’s even a chance that Allen has been the victim of an anti-Semitic conspiracy, non-Jews opposing bigotry would certainly not want to sign on to a “witch hunt.”

None of this is meant to deny the existence of anti-Semitism or anti-Semites’ hatred of Allen. The internet is fairly saturated with white supremacist posts and comments anti-Semitically deriding Allen as a “Jewish pedophile.” These people and their posts are heinous.

And yet, in order to hear Dylan, and respond to her question, we need to consider the rhetorical catch-22 in which we’ve been caught: if only anti-Semites mention Allen being Jewish, then a frank discussion of Allen’s own bad faith intimation that anti-Semitism accounts for his being accused of these misdeeds becomes impossible.

Historically, Jews have been the victims of many stereotypes, including the blood libel – the anti-Semitic myth that Jews killed non-Jewish children and consumed their blood. When a beloved Jewish artist is accused of doing violence to a non-Jewish girl, it’s understandable that we would want nothing more than for the allegation to be false. But all evidence points to Dylan’s allegations being credible. This does not reflect poorly on any Jew other than Woody Allen. It does not confirm any stereotype. It means that Woody Allen, like too many other men of every ethno-racial and religious background, has preyed on the vulnerable.

Consider that it was not until Hannibal Burress’s comedy routine imploring Bill Cosby to stop raping women that the tide of public opinions shifted on another iconic male comedian. If we want the #MeToo moment to support Dylan Farrow, we need to hear more Jewish men say the following words: I believe Dylan.

Eli Bromberg just completed his PhD in English and American Studies at UMass Amherst, where he wrote a dissertation on Jewish American incest narratives from the 1990s.