Growing Up Poor, Hanukkah Was A Fraught Time 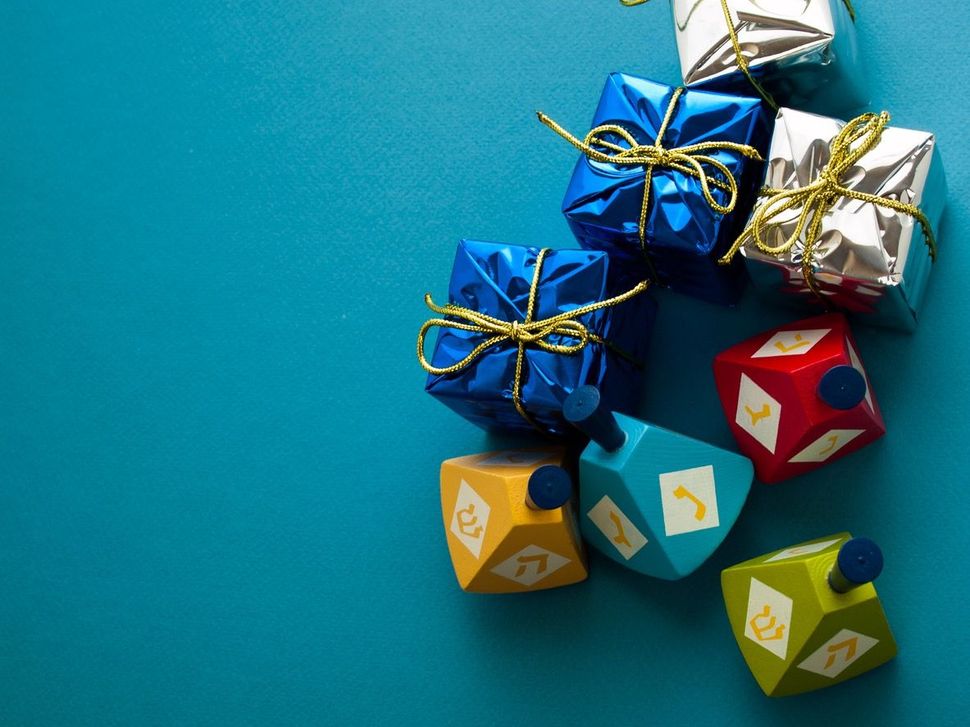 I was six when I first felt guilty for receiving a gift.

I didn’t know what money was, but I was pretty sure we didn’t have it. Although I didn’t grow up feeling inadequate, I somehow knew we had less. Nevertheless, Hanukkah was a festive occasion in my house. My parents made an abundance of food, not just because we are Jewish, and overfeeding is tradition, but because my dad loved to cook.

One year we had a small family Hanukkah party. My mother invited her parents for doughnuts and drinks. They drove all the way from upstate New York, a three hour drive, which was a far distance for my 78 year old grandfather.

After we ate my dad’s pizza and my mother’s lasagna, all kosher, my grandmother told me she brought gifts for my brother, my sisters and me.

I heard it as: Don’t. You shouldn’t. You don’t have money.

But she had insisted.

She handed us boys each a heavy truck, larger than my small arms. Wrapped in a box with a plastic transparent window, it was shiny and stable, a Hess truck, heavy and colorful with the requisite holiday colors.

But it felt wrong.

It wasn’t because we were Jewish and this was obviously a Christmas item. I just didn’t know what to do with the present. I didn’t know how to take something for free. It felt wrong because I didn’t do anything to deserve it.

It also felt wrong because it seemed expensive. It was heavy, so it must be valuable, my six year old brain reasoned. But my grandparents were poor. My grandfather was a cab driver, and my grandmother sold Tupperware. Paycheck to paycheck was the next level up.

My grandparents needed to eat, right? I feared my toy would make them hungry.

Full of feelings I didn’t understand and anxieties I couldn’t really comprehend, I hugged my grandmother and kissed her as thanks for the gift. My grandfather looked over us, quietly smiling, radiating love. When I kissed him, my lips felt the rough stubble on his cheek, which pricked me ever so little. The party soon ended and they left for the long drive back home.

It was the last conversation I had with my grandfather. On the way home, as he weaved through the dark and lonely winding roads around mountains in Upstate New York, he hit a guardrail. I only recently learned from my mother that he had a stroke while driving, which caused him to lose control. Somehow, despite that, he walked 2 miles to the nearest house to ask for help for his wife, whose legs were crushed.

My grandfather lost his ability to speak. When we visited him later at his rehabilitation facility, I saw the same old smile of my Zaidy, but all he could utter was “ba ba ba.” His last gift to me was a truck he couldn’t afford.

I connected the two in my head.

Twenty years later, I still don’t know how to accept gifts. My family and friends know that I’m a hard person to give gifts to. In the past, I have received a watch from my sister that tells the times of prayer in Israel, ties from my parents, and Moleskin notebooks from friends (for the sake of salvaging relationships, I will not reveal which one of the three I find most useful). It’s not that I don’t appreciate these acts of generosity. It is that my brain still does not know how to comprehend new wealth that I didn’t earn. I barely understand being liked, let alone being rewarded with things to express that I am liked. I still possess that six year old child’s confusion about new things magically appearing in my life.

I can’t give gifts, either. Instead of buying a friend stuff with my paltry teacher’s income to satisfy my social obligations, I give my loved ones used books. Ones I think they will like. Ones that I appreciate. Ones that cost 50 cents. I write a kind inscription, finding similarities between the recipient and book. “You changed my life. So did this book. Enjoy.” Or, “This book is quirky, just like you.” It’s often the inscription that gets more time and thought then the gift itself. I can always afford to give kindness.

A short while ago, I gave my friend Peter a copy of my favorite book, Bill Bryson’s “A Short History of Nearly Everything”. A New York Times Bestseller with millions of copies, I ended up with an extra one. I found it on a “free books” shelf on a Washington Heights corner, and immediately thought of Peter when I saw it. Peter and I volunteered at the Lowline Lab together. In addition to science bringing us together, he taught me a lot; about science, travel, and dating. I chose the book as a goodbye present because it symbolized our relationship, mostly educational and a little fun. He was Mr. Miyagi, and I was karate kid. Although the book was free, the meaning was something money couldn’t buy.

On the train to Peter’s goodbye party at a bar in Harlem before he left for grad school in Maryland, I spent over an hour writing an inscription in my notebook, practicing my words and penmanship. It had to be perfect. When the train pulled in to the station, I got out and sat down on the station’s bench to finish my work, filling up an entire blank front page in the book. I had a lot of feelings. Peter shed a tear when he read it later in the noisy and dark dive bar.

Although our friendship withered since then because of some words I shouldn’t have said, I find solace with the thought that I once gave him a gift I could afford — a part of my soul that money can’t buy.

Growing Up Poor, Hanukkah Was A Fraught Time