American Jews: Your Obsession With The Western Wall Is Ridiculous 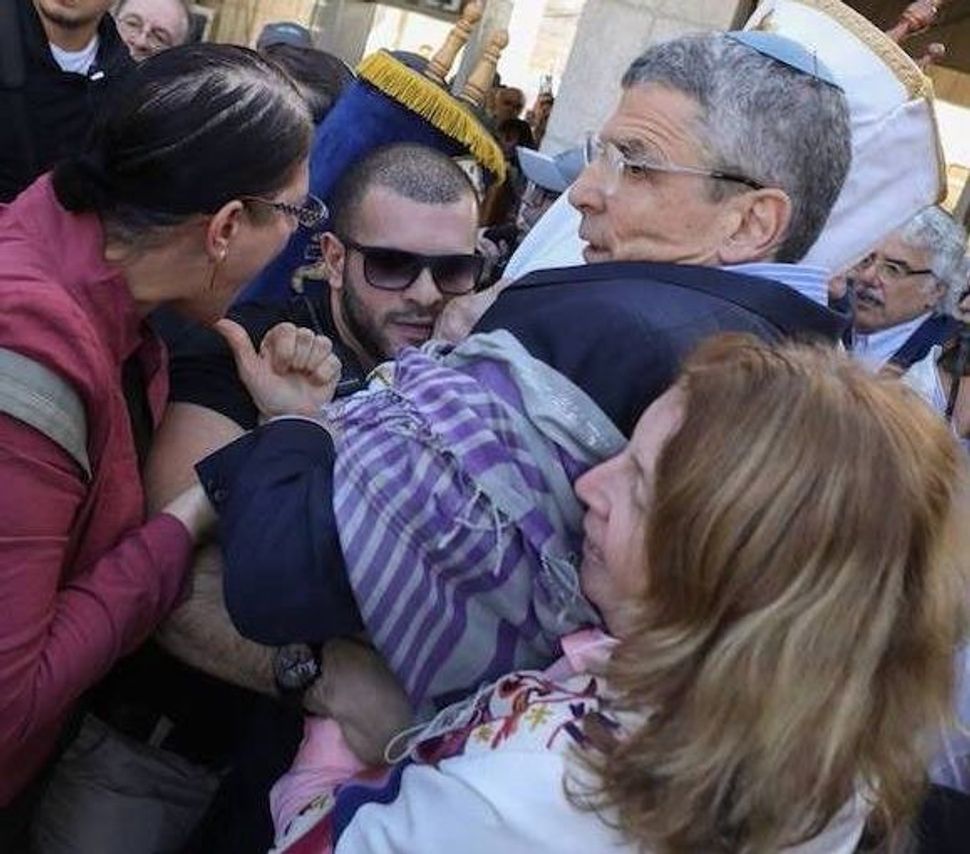 A familiar scene played out in front of the Western Wall recently. Leaders of the Reform movement from both the United States and Israel along with members of Women of the Wall attempted to pray and bring Torahs to the Wall. They were forcibly stopped and subjected to violence by guards hired by the Orthodox Western Wall Foundation that runs the site, and the usual images of Jewish discord spread around the world.

American Jews watch video of their religious leaders being beaten up and denied access to a sacred and holy space, and it makes their blood boil. They view the Women of the Wall and the struggle of the Reform movement to be recognized by Israeli governmental and religious authorities as rallying points that are worthy of outrage. Israeli Jews, on the other hand, watch the same events unfold and merely shrug.

By seizing upon access to and freedom of worship at the Western Wall as the hill on which to die, American Jews are displaying a tin ear as to what is really important to Israelis: religious pluralism. Israelis are concerned about religion-related issues that affect their daily lives, such as conversion, the ability to have weddings and funerals the way they want.

The harsh reality we American Jews have to understand is that Israelis – including ones who identify with the Reform movement – could hardly care less about the Women of the Wall and the status of the Kotel. Non-Orthodox Israeli Jews live with state-sanctioned religious discrimination and non-recognition, and the despotism of the Haredi chief rabbinate that enables these humiliations, in multiple ways as a daily proposition. The Western Wall and their ability to pray there according to their own traditions is one of a myriad of issues that they constantly confront related to religious pluralism and Jewish observance.

Thus, by consuming all of the oxygen in the room, the fight over the Western Wall obscures many other important problems and threatens to turn religious pluralism into a single issue that crowds out the other equally important — if not more important — ones.

American Jews care a great deal about the Western Wall, yet the time and energy spent protesting at the Kotel is time and energy that could be more productively spent elsewhere. Every impassioned speech about egalitarian prayer space in this one particular spot is one that rallies American Jews while missing the opportunity to rally Israeli Jews, for whom the Kotel is a mostly ignored sideshow. Israelis do not understand why the Western Wall has become such a cause célèbre, and it makes it more difficult for American Jews to build bridges with Israeli Jews and form coalitions that will truly elevate religious pluralism into a top-line policy issue. Protesting over the Western Wall, no matter how emotional and heartfelt, does not advance the causes of non-Orthodox Judaism and the Reform movement, or bring Israel closer to being a true homeland for all Jews.

It is well documented that the majority of Israeli Jews support advancing religious freedom and equality. Moreover, Rabbi Uri Regev, who has long been a leading advocate for these causes, recently observed that “freedom of religion and equality, unlike other topics in the fields of foreign relations, security and settlements, is unifying, rather than divisive.”

Particularly at a moment when the rift between Israeli and Diaspora Jewry is growing, it is very unfortunate that American Jews have not expanded their agenda and made common cause with those leading the fight on the ground in Israel. Without voting in Israel or rallying Israelis around common ideals, the days of American Jewish influence in Israel are over. We must do a better job of paying heed to what is important to our Israeli friends and allies, and the hard truth is that the Western Wall ranks very low on their list of priorities. We have been using an issue that appeals almost solely to American Jews as a way to press our concerns in Israel, and it will continue to fail if we do not wise up fast.

Hebrew Union College ordained its 100th Israeli rabbi last month, which was what precipitated the effort to bring Torahs to the Western Wall. Yet the stories and attention were primarily focused on the Wall rather than the joyous and laudable event that accompanied it. What happened at the Western Wall was disgraceful, but continuing to utilize the Kotel as a lightning rod for publicity is not advancing the larger cause, and it is not the best way to achieve religious or political objectives.

If American Jews want to alleviate their rift with Israeli Jews and move their agenda forward, they must acknowledge that there are bigger issues at hand and that success will only be celebrated if they can attract Israelis to their cause. As important as the Western Wall is as a symbol, it is time to leave it behind and focus on the more difficult work ahead.

Peter Joseph, until recently a member of the Board of Governors of the Hebrew Union College-Jewish Institute of Religion, is Chairman Emeritus of the Israel Policy Forum, a founding board member and former Chairman of the JCC in Manhattan and a board member of the Shalom Hartman Institute.

American Jews: Your Obsession With The Western Wall Is Ridiculous