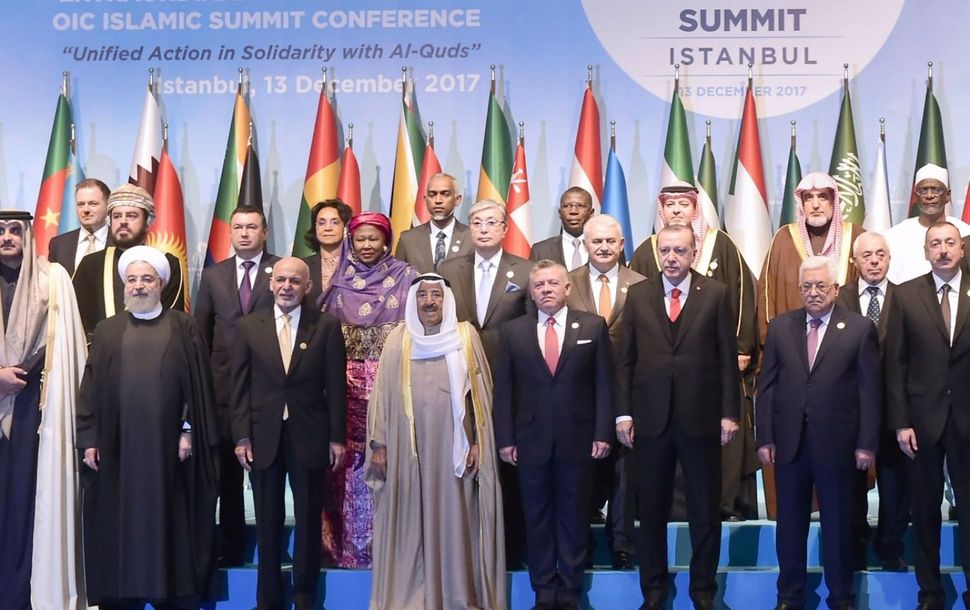 By this point it’s becoming quite apparent that we won’t be seeing the sort of disastrous fallout that the critics were predicting after the president’s December 6 Jerusalem speech, recognizing the holy city as Israel’s capital. No new Palestinian intifada. No mass rioting across the Muslim world, like the Muhammad cartoon riots of 2005.

There are aftershocks, but they’re not the sort that anybody expected. What there are, mostly are embarrassments.

One came at the December 13 “emergency summit” of the Organization of Islamic Cooperation. Leaders of the world’s 57 Muslim-majority nations met in Istanbul and voted unanimously to condemn Trump’s speech, accuse Israel of terrible crimes and “reaffirm” their support for Israeli-Palestinian peace based on “the two-state solution” and the Palestinians right to a sovereign state “on the borders of 4 June 1967,” “with east Jerusalem as the capital.”

They also reaffirmed their “attachment” to the 2002 Arab Peace Initiative, which promises to establish normal diplomatic relations and to “consider the Arab-Israeli conflict ended” in return for allowing Palestinian statehood on the 1967 lines “with East Jerusalem as its capital,” and negotiating an “agreed” solution to the Palestinian refugee issue — that is, a solution that Israelis and Palestinians can agree on.

(A refugee agreement isn’t impossible. In fact, an outline already exists. It was reached in 2008 by Israel’s then-prime minister Ehud Olmert and Palestinian leader Mahmoud Abbas, though there were important details that remained to be ironed out when Olmert left office and the talks ended.)

Of the 57 member-states in the Islamic body, 22 sent their heads of state or government to the summit, including King Abdullah II of Jordan, Palestinian leader Abbas and President Hassan Rouhani of Iran. The other 35 sent ministers. The vote was unanimous. This is a big deal.

Before continuing, let’s recap: The 57 Arab and Muslim nations responded to White House recognition of Israel’s capital by denouncing it, calling Israel nasty names and then reiterating their demand for a Palestinian state alongside Israel and a share of Jerusalem. In return they promised, via the Arab initiative, to recognize Israel, open embassies (that’s what “normal relations” means) and end the Arab-Israeli conflict. And yes, you read that right: Iran voted for it.

This is an embarrassing display of diplomatic ju-jitsu. Washington takes a sharp turn in Israel’s direction and Israel’s opponents react by striking a reasonable pose.

We should note here that the United States isn’t the first nation to recognize Israel’s capital in Jerusalem. Russia did it last spring. The difference is that Russia recognized West Jerusalem as Israel’s capital and simultaneously recognized East Jerusalem as capital of a future Palestinian state. Trump’s statement didn’t endorse Israeli control of the entire city, but it’s been read that way both by Palestinians and by many Israelis, including some important allies (see here and here) of Prime Minister Benjamin Netanyahu.

Is the Istanbul declaration just words with nothing behind them? Possibly. On the other hand, we’ve spent decades insisting that Israel’s enemies meant every word when they threatened to drive Israel into the sea and the Europeans tried to convince us it was just rhetoric. We jump on every quote from a Palestinian politician or imam who threatens Israel or curses Jews to prove the ill intent of the other side. It’s when they offer to accept the State of Israel and make peace that we say you can never believe a word they say.

The other major aftershock from the Trump speech is more subtle. Simply put, nobody has agreed to consider the American position. Well, that’s not quite right: the Czech Republic announced that they agreed with Washington and were going to move their embassy to Jerusalem. The Czechs were promptly informed by the European Union that they can’t do that because as members of the union they aren’t allowed to act against EU foreign policy. So they backed off.

This is a symptom of a larger problem: the failure of the Trump administration to maintain America’s world leadership role — a failure, in fact, to understand what it means to conduct foreign policy.

This is the fourth time that Trump has initiated a major policy shift that puts America at odds with a significant international consensus. The others were withdrawing from the Trans-Pacific Partnership, withdrawing from the Paris climate accord and dismissing the Iran nuclear deal.

Of course, every other president has taken positions that challenged a global consensus or status quo. The difference is that they lined up support from other major powers before acting. The result was that America was able to lead, create momentum and alter international behavior. Even the younger Bush, in his wrong-headed decision to invade Iraq in March 2003, had British, Australian and Polish troops with him in the initial assault and 34 other countries that joined in over the summer. Like it or not, he did his homework.

Trump, by contrast, announces without doing any groundwork. In this as in so much else he labors under the mistaken impression that governing consists of saying stuff. He hasn’t even placed ambassadors in many crucial countries, leaving nobody on the ground to do the work of persuading. The result is that there’s no persuasion. Not surprisingly, nobody follows and nothing changes. The rest of the world ignores Washington’s words and continues on its way. America sits alone while other countries step in to fill the leadership vacuum. We’ve let China take over leadership of the Pacific Rim nations. Russia is emerging as the new hegemon in the Middle East. The climate accord is proceeding on schedule, with every country except America on board. Trump is simply not taken seriously. America is mocked around the world for electing a buffoon as president.

Nowhere is the Trump foreign policy malpractice more dangerous than in Israel, which is, ironically, its most vocal booster. Israel is deeply dependent on American strength. It’s not just about weapons and money. America uses its influence and occasionally its veto to ensure that the U.N. Security Council, whatever its rhetoric, doesn’t act against Israel with sanctions or troops, as it’s done in dozens of countries. On the world stage America’s weight ensures that Israel isn’t isolated but remains part of the world system in civil aviation, communications, credit markets and all the countless ways that countries interact.

Israel’s enemies constantly look for ways to hem it in and reduce its freedom of action. America doesn’t let it happen. Indeed, as any Israeli strategist will tell you, the very fact that Israel has relations with Egypt and Jordan and is inching toward Saudi Arabia and other Arab countries is due to their understanding that they can’t beat America. But that doesn’t work if America’s commander in chief doesn’t know and doesn’t want to learn the complicated mechanics of American power.