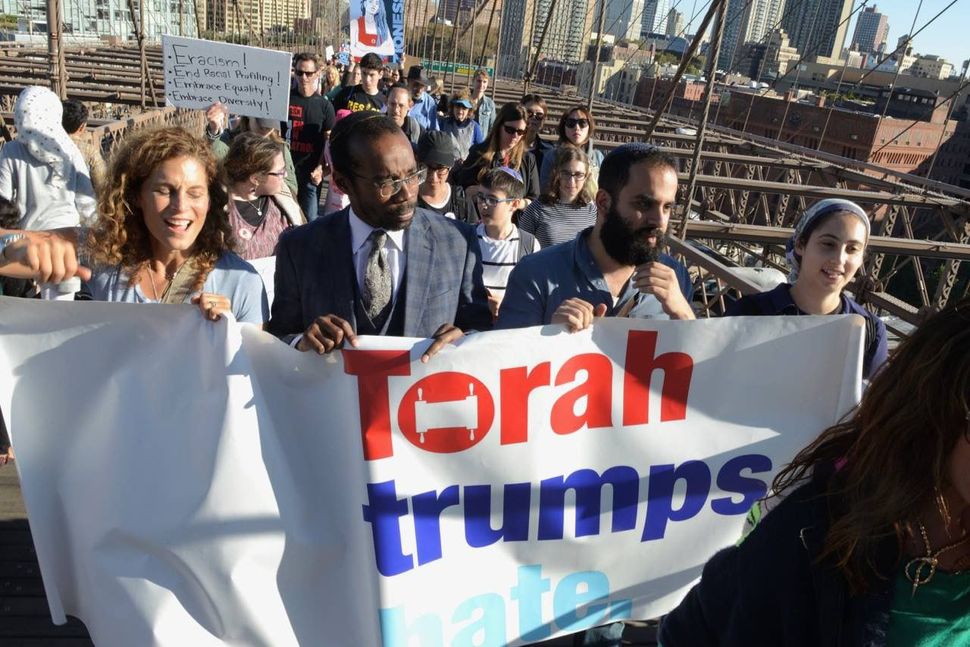 I’ve always been confused by this idea, of being “of color.” I’m Sephardic, but I grew up in a white town, and my parents grew up in an Ashkenazi area of Israel, so, culturally speaking, I always felt identified with some degree of whiteness.

It was a double-edged sword, though. No matter how white you feel, if you’re brown-skinned, there’s only so much passing people will let you do. There was the way people in high school would casually joke about me being a terrorist (this was before 9/11). And then there’s the way, when I visit my parents in St. Louis, I’m sometimes confronted with the fear many have of brown people. Or the way, in many Jewish contexts where Ashkenazim are the overwhelming majority, some people treat me as an exotic specimen, someone they hope will have some deep kabbalistic revelations or traditions that will provoke the ubiquitous, “Ugh, the Sephardim are just so special.” They’re often disappointed when I tell them I know more about Chabad tradition than I do about Sephardic culture, and some of them cluck their tongues in disappointment.

When I was a kid I created an imaginary friend named “Mike” because I wished I had that name. But though it’s been omnipresent, this othering has never been a huge part of my life. Or rather, it’s always been something I’ve tried not to focus on. So much of my life was spent trying to fit in — trying not to be bullied, trying to not come off as the son of immigrants — that I wasn’t interested in an identity or a skin color that would make me different. I was interested in fitting in, so I thought of myself as white.

And in that sense, paradoxically, race and skin color and whiteness and color actually were huge parts of my life, precisely because of the amount of energy I invested in not identifying as the person everyone saw me as. If I felt white, they saw brown.

But then, in the past few years, American society suddenly exploded in a recognition of identity. People who feel threatened by this often call it “identity politics,” and long for the days when assimilation was America’s highest credo.

The thing is, I sympathize with them — because it was my credo, too. Because I spent so much trying to deny my otherness, I understand the backlash against the explosion of people celebrating their difference.

I understand it, though I don’t share it. The opposite, I can’t help but celebrate as white supremacy is faced down, as people of color speak up about their specific needs, as women rally together to overturn a world specifically built to undermine their power.

But I also feel that I am sitting on the sidelines. I have come to recognize my identity, that I am a Jew of color. And yet, ironically, many of those in the very movement that brought the world to a place where I could recognize this are now calling me white.

For even in the most liberal of spaces, a Sephardic Jew is often not even acknowledged as being “of color.”

About a month ago, I sat in a room full of progressive Jews. I was the only Sephardic Jew. A non-Jewish woman of color (she was Hindu, and the daughter of immigrants from India) was there as a representative of the larger progressive movement of which we were part. She introduced herself and spoke quite beautifully and eloquently about how she was thankful for this opportunity to experience and learn from Jews. She felt that, especially in the liberal world, Jewish voices are often muted and unheard.

Then she said something along the lines of, “While I, as a person of color, think it’s so important that people of color have a voice in today’s world, it’s also really important to hear from Jewish ones.”

It was subtle, and no one else seemed to notice it, or maybe didn’t say anything, but her sentence basically proclaimed that all Jews were white. Yes, an under-heard minority, but only in a religious sense.

Shocked, I looked around, and I realized that I was the only Jew of color sitting there.

I wondered: How could she basically say Jews are white with a Sephardic Jew sitting right across from her? Did she not see me? Even though she was mistaken, wouldn’t she have realized her mistake just by being present in the room?

As I reflected on it afterward, I realized something. To most white people, I am a person of color, and no matter how acculturated or assimilated I become, that will just be the reality. But to many in the liberal world, especially people of color, I am white. Or, I am treated as such. Ironically, many of the people most devoted to intersectionality are the ones who most blind themselves to the identities that they haven’t yet seen and designated as worth noting.

If we were to create a world where we are all truly seen for what we are, truly understood in all the details of our identity, we would be able to look at a table of people who are different in their own ways and be educated enough to know why their background, their color, their ethnicity, their religious beliefs and so much more matter so much. We would be able to really know the particulars.

And so when a person of color can’t even see another person of color sitting across from him or her, we know that this is not the case, that the work has really only begun.

In a way, I am more understood by the Twitter trolls who tell me, “Go back to your own country!” (I was born here.) They see my otherness. They reject it. But they see it.

And this is why the work lies with us all individually, as I know my experience is not unique. It is for all of us to truly own and take part in a rejection of assimilation and an acceptance of norms, in a refusal to accept whatever whiteness or assimilation those who are unable to see us for what we are foist upon us. And it falls to all of us to do the work of understanding and expressing that part of ourselves with pride, and without fear, and without concern that we are stepping on others’ toes.

It is with all these thoughts that I demand of myself to let go of my assimilationist attitude. I once did it when I became a ba’al teshuvah and was willing to wear my yarmulke and tzitzit in public. Now I will do it again, as a person of color, a Jew of color. Because if I can’t see it myself, then no one else will either. Except for the Nazis.