My Fellow Pro-Israel Jews: You Got What You Wanted, But You Paid Too Much. 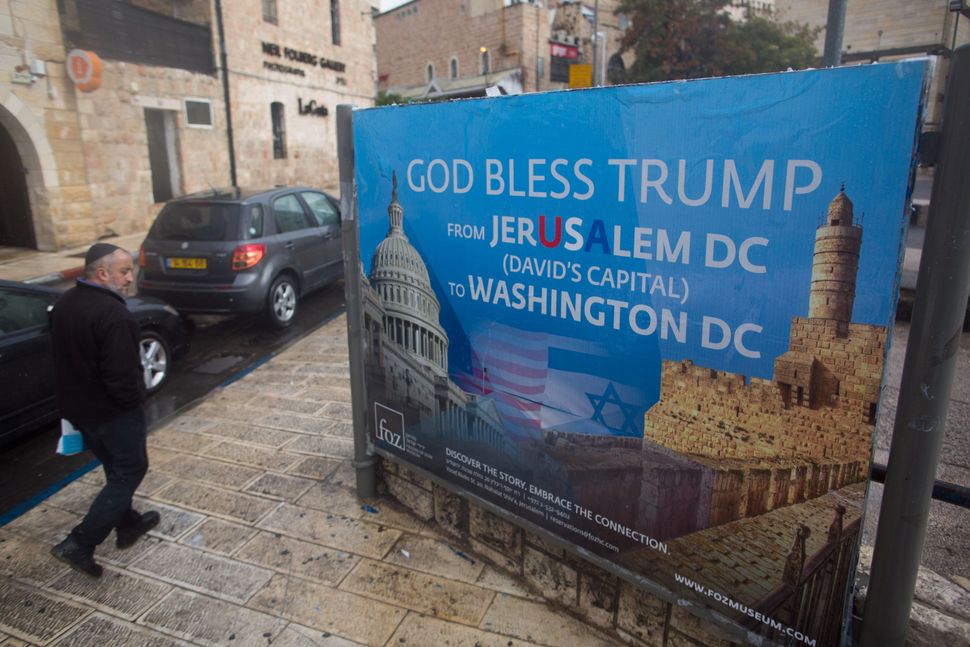 Congratulations. You got what you wanted.

Yesterday, the president declared Jerusalem the capital of Israel. He didn’t use the word “undivided”, but he did promise to one day move the embassy to Jerusalem.

Jerusalem was my home for three years. Israel was my parent’s home until they moved to the US. I believe with all my heart that it makes no sense for us to imagine a world where Jerusalem isn’t the capital of Israel, and I watched in horror as the Israeli claim to the city was slowly eroded by those in power in the United States.

All things being equal, I would, like you, be supporting what Netanyahu is now calling the Trump Declaration.

But things aren’t equal, are they?

The recent discussions among us pro-Israel folks, both pro- and anti-Trump, have been about whether this move to recognize Jerusalem is “good for Israel.” Maybe it will hurt us in the long run. Maybe the loss of life that will inevitably occur won’t be worth it. Maybe Trump won’t actually move the embassy.

But what I’ve come to realize is that this question of whether it’s good for Israel misses the point.

The point is: Look at all you sacrificed. Look at what you’ve had to do to force an American leader to utter a few words of approval, and make a promise. You had to sacrifice decency. You had to sacrifice others — the lives of refugees. Remember that we were once refugees; it’s the only reason Israel even exists. You sacrificed the democratic order that allowed us to even be in a position of freedom that allows us to have any influence over an election.

You sacrificed it all to get this scrap. And now, like dogs at a table, you stand there taking whatever your abusive master dishes out, and then bragging about it. As long as it’s the piece of meat you’ve been eyeing, all else falls by the wayside.

In other words, you’ve sacrificed all the things you once held as important, that you used to use as arguments for why Israel deserves a special arrangement with the world. Remember “the only democracy in the Middle East”?

Sorry — you’ve sold out American democracy. You don’t get to say that anymore.

Remember when you bragged that Israel was a country that allows Muslim citizens equal rights under the law? Sorry, you just supported a man who has demonized Muslims both inside and outside of our country.

Remember bragging that Israel was a country that respects human rights? Sorry, you’ve supported a man who has done everything he can to destroy the rights of everyone but rich white Americans.

Worst of all, in selling out like this, you’ve mortified Israel, betraying the highest value of Judaism and the Jewish state: standing against idol worship.

It was when Abraham smashed his father’s idols, when he understood it was worth it to be thrown in a furnace if it meant not bowing down to any one physical thing in this world, that God promised us Israel. Israel was the national, societal structure by which we were supposed to spread the message that valuing one physical reality more than all others means we have sacrificed what makes humans rise above the dog at the table.

How ironic it is that for now, Israel itself has become our idol, one where even those of us who opposed Trump are now debating his merits when it comes to our beloved nation.

We’ve given up all the light, all the substance, of our fight in order to preserve its shell. It’s a shell that is absolutely necessary to protect, but a shell which means nothing when it has no substance within it.

To the American Jews who have supported Trump all the way here and are declaring victory, it is time to stop idolizing Israel. You are turning your love into a graven image, and you are bowing down to it while others suffer around you and you do nothing.

As a supporter of Israel, I will not take any joy or pleasure of this moment. Its cost was too high, and even if it portends only good things for Israel, we will forever be remembered for the sacrifices we made to make it so.

And our children will hang their heads in shame.

My Fellow Pro-Israel Jews: You Got What You Wanted, But You Paid Too Much.