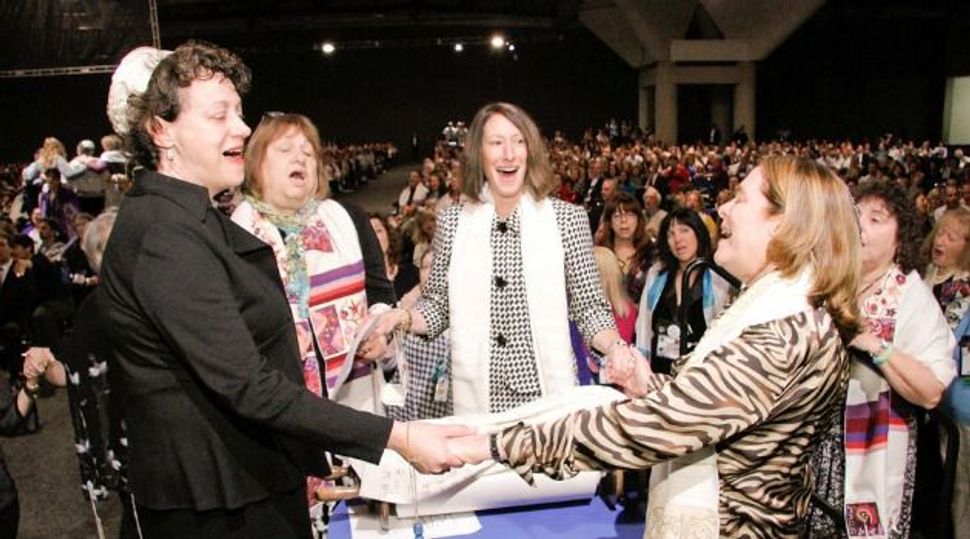 Reform Renewal: A group of women hold hands around the Torah during the Shabbat morning service at the Union for Reform Judaism?s biennial conference in San Diego. Image by urj

A few weeks ago I got home from the URJ Biennial – a convention of 6000 Reform Jews from all over the world who come together to sing, prayand learn for five days. Among the attendees there were dozens of women Rabbis, and many more female Jewish professionals.

All attendees wore name tags which gave our congregations and locations. For Rabbis, these tags included our title, but not our positions (i.e.-Assistant Rabbi, Associate Rabbi, Senior Rabbi, Rabbi Educator or Solo Rabbi).

My tag read: Rabbi Jordie Gerson, Greenwich Reform Synagogue, Greenwich, CT. It seemed simple enough, but the conversations that would follow were jarring. Over and over again, my nametag prompted the same discussion.

“So, where are you?” Someone would ask. “I’m the Rabbi in Greenwich, Connecticut,” I’d say, gesturing to my tag. And then, almost immediately, they would ask, “So who’s your senior [Rabbi]?” or “You’re the Associate?” or, in its most frustrating iteration, “So — you must be [your older, male predecessor’s] assistant?”

I am none of these things. I am The Rabbi. The Only Rabbi. The Solo and the Senior Rabbi; The Rabbi, Ha Rabbah, the Big (Kosher) Cheese. But, apparently, I don’t look like it.

To begin with, I’m a woman. And though not as young as I look, I’m still young by the standards of the Rabbi world. (That said, I’ve been legally drinking for far more than a decade, and no, I’m not going to tell you how old I am). I’m also small – 5’0” and 115 pounds soaking wet. And I lead the only Reform congregation in an exclusive New York City bedroom community which, you would assume, would have a Rabbi of stature leading it (and by stature, I mean, apparently, height and a big beard). But I have many short, young, male colleagues who lead their own congregations. And no one’s asking them who their senior is.

I’m not an anomaly. Female colleagues who lead their own congregations face the same questions at the same conventions – and the same assumptions: that we’re not the Rabbi. Not when we look like this.

It’s common, in fact, that when prospective congregants come to meet with me for the first time, they’re shocked when I open the office door. “You’re the Rabbi..?” they ask, double-checking, as if I might be hiding another one under my desk. “I,” I say, smiling exhaustedly, “Am she.”

And, at Yom Kippur this year, my parents’ best friends were sitting in the back row of the shul, when, after my sermon, the older couple behind them looked at each other and said, “Wow. She doesn’t look like it – but she sure packs a punch.”

I’m not alone. A friend who used to work as a Rabbi at a huge Reform synagogue in Washington D.C. recently told me this: A couple came into her office one afternoon. They stepped into her office, which clearly states “Rabbi” on the door, but when they walked in, they looked at my friend and asked, “Where’s the Rabbi?”

“I was literally sitting behind my desk,” she told me.

Rabbi Leah Berkowitz, the Rabbi at Vassar Temple in Poughkeepsie, has a similar story. At her very first pulpit, the senior Rabbi was away when there was a death in the congregation. A family member came to meet with Rabbi Berkowitz and said “Oh, you’re younger than I expected.” She smiled, invited them in, and walked them through the Jewish rituals of burial and mourning.

“I still have the message that the mother left on my voicemail after the funeral, telling me how grateful she was for the ceremony,” Rabbi Berkowitz told me. “…And she was still surprised that I was competent.”

It seems impossible for people to accept what Rabbi Berkowitz knows: “Yes, I’m young. Yes, I’m a woman. But I’m a rabbi — I’ve got this.”

This is demoralizing and exhausting. And it erases slow and painful advances it’s taken millennia to overcome – in a tradition whose right wing still scoffs at women rabbis.

But it’s hardly exclusive to the Jewish community. Women ministers contend with the same biases. The Rev. Kaji Dousa is the Senior Minister at Park Avenue Christian Church and the first woman – and first African-American woman — to lead the congregation in 207 years.

And yet Reverend Dousa is constantly questioned about her role at the church.

“In nearly every ecumenical and interfaith setting in which I have fought to find myself, the men around me remove my title,” she told me. “Referring to each other as Father’ and ‘Rabbi’ and ‘Pastor’ and ‘Imam’ or ‘Guru’, I am, more often than not, ‘Kaji’.”

Meanwhile, Reverend Dousa’s male mentors continue to insist that titles are irrelevant because “the work speaks for itself.”

So, is this just a kvetch fest? No. Women rabbis, ministers, priests and monastics face real and significant barriers; a lack of pay equity and far fewer opportunities to succeed on merit. The stained glass ceiling may be cracked, but it’s not yet been broken.

Of course, when we’re being pragmatic we know: part of what we’re up against is conditioning. When people of faith write the story of what a religious leader looks like, society has not yet conditioned them to imagine us.

And it’s not necessarily misogyny; some of the worst offenders when it comes to gendered assumptions are other women. And so the onus is on us to continue writing new scripts, model new modes of leadership, and, when we can, depersonalize, the shock and doubt that comes with our ascension to greater positions of power, as much as it hurts us.

But the onus isn’t just on us. If my experience and Rev. Dousa’s and Rabbi Berkowitz’s have anything to teach us all it’s that we, as a society, need more exposure to women religious leaders, until no one is surprised to see us on the pulpit.

And we also need more women sitting at the table when our leaders are chosen; hiring committees, parishioners, congregants and governing institutions who are aware of how their implicit and explicit biases privilege male candidates over female candidates.

Because the truth is, whatever people may assume, what ultimately matters is that Rev. Dousa, Rabbi Berkowitz and I are all leading thriving – and growing communities. In a society where religious affiliation is dropping, this is no small feat. And maybe — just maybe — it’s because our communities were innovative enough to imagine a new model of leader in the first place.

Rabbi Jordie Gerson is the spiritual leader of Greenwich Reform Synagogue in Greenwich, Connecticut and a regular contributor to The Forward, The Huffington Post and the Harvard Divinity Bulletin.