The Real Target Of Gaza’s Rockets Is Not Israel 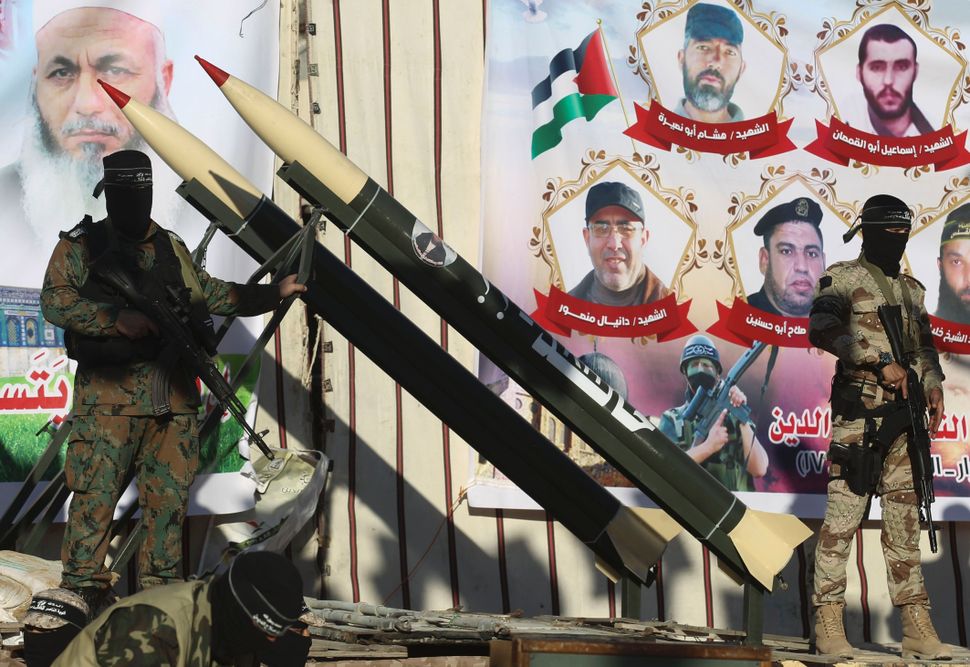 Last week, the Islamic State published a video that appeared to show the execution of a Hamas militant. Meanwhile, Israel has been fending off rocket attacks from the Gaza strip, to the tune of 30 rockets since President Donald Trump’s announcement that Jerusalem is the capital of Israel.

But these two episodes reveal long-simmering tensions within Gaza itself.

In fact, those launching these rockets at Israel are not from Hamas; the opposite – they are salfis and jihadists. And when jihadists launch these rockets, their target is not Israel so much as the damage Israel does to Hamas to retaliate.

These jihadists are Gaza’s ultimate outcasts: uneducated, underprivileged, marginalized and often mercenary. They are the most unpopular groups in Gaza and their current shadow actions and improvised rockets are faced with increased popular pressure to stop and capture such outlaws. And yet the Hamas authorities’ exerted efforts to stop rocket fire only seem to increase it.

From my experience growing up in Gaza and working closely with Hamas leaders, I came to understand that joining a group like Hamas requires certain criteria to be filled. There is an ideological curriculum that must be learned, and there are repeated tests during which loyalty and trustworthiness must be demonstrated. It’s a process aimed at filtering out weaker recruits from the reliable ones. It often takes years to be accepted into the group, though it only takes minutes to be excommunicated, usually for the smallest infraction.

By contrast, jihadist groups provide sanctuary for the rejected, the dissenters, the over-radicalized, the excommunicated, and those who have lost hope. These groups have no membership preconditions, no tests or evaluations and no multiple layers of leaderships. Their ranks are united by fury, anger, disaffection, lack of trust, thirst for revenge and/or sheer boredom. They are easy to join, leave and rejoin. These groups can be tiny, unorganized, non-hierarchical, and dispersed; as a result, they are hard to track down. Their fragile structures mean they inhabit a cycle of dissolution and reconstruction according to prevailing political conditions.

Jihadist groups don’t have vested interests which can be endangered or advanced, so they’re not easily bargained with. They don’t enjoy the stature of other armed “resistance” groups; they are never invited to the decision-making table, they are never acknowledged or granted any privileges. That lack of leverage means they have few defenses against being targeted by more powerful Palestinian factions.

But most importantly, these jihadist groups are not viewed by Gazans or the Palestinian institutions as part of the fabric of Palestinian society or life. They are often accused of being driven by outside agendas, whether Israeli or Palestinian Authority intelligence ones; indeed, the video released on Wednesday of the beheading in Sinai was called “a Zionist production” by Hamas. Hamas in Gaza believes that jihadist groups are easily infiltrated and usually paid to undertake certain actions, such as to break a ceasefire or provoke unrest.

But it’s Gazans who pay the price for these jihadist attacks.

Jihadist groups’ rocket attacks have spiked in recent weeks as Trump’s Jerusalem declaration offered them opportune moral cover. Over 40 primitive projectiles have been launched on adjacent Israeli towns, most of which didn’t even manage to clear the walls round Gaza, falling within the Strip or few meters over the wall; some were intercepted by Israel’s Iron Dome system, and a few fell on Israeli residential areas, but caused no casualties.

It costs less than $100 to produce a home-made rocket, which are called locally “belly-dancers;” they swivel in the air and make disturbingly loud noises like fireworks, and they lack a proper explosive warhead, so their potential for damage is limited. Nevertheless, their strategic weight is disproportionate to their explosive might, and this weight is essential for anarchist groups like theirs to survive.

In response to projectile attacks, the IDF routinely targets vital Hamas facilities with artillery fire and airstrikes, as they did this week. Those strikes are a chilling reminder for the shell-shocked population of a recent war from which they haven’t yet recovered, and warns them of the likelihood of a new round of conflict if the attack trend continues.

But it’s a vicious cycle.

The only way for Hamas to deescalate tensions requires it to deploy more force to police the ceasefire and arrest any activist identified with jihadist groups. Hamas has been actively doing this for years. The result of this policing has been more jihadists in jail, with their groups’ only leverage to launch more rockets to pressure on Hamas to release their detained associates. When Israel hits Hamas in response – that’s a bonus.

The more Israel retaliates against Hamas, the more Hamas is likely to comply with the jihadists’ demands in order to restore calm and prevent further damage to their own installations. It remains hard, however, for Hamas to perfect their policing performance since rockets are usually preinstalled and launched from random areas.

In recent months, Hamas has tightened its campaign of arrests of jihadists in any way associated with ISIS in Sinai, in order to demonstrate its trustworthiness to the Egyptian regime. Hamas has increased the border control forces and shut down many people- and weapons-smuggling tunnels. Its aim is to prevent jihadists from crossing into Sinai – where recently a jihadist from Gaza blew himself up near a group of combatants from Hamas’ Qassam brigade who had stopped him at the border.

This tightened security grip has suffocated jihadist activities, and their last resort is provoking Israeli airstrikes against Hamas.

Ironically, in the old days, Hamas undertook similar actions to those of the Jihadist groups to blackmail the PA into complying with its demands. Every time there was a breakthrough in the Israeli-Palestinian negotiations or a potential peace agreement loomed, Hamas, the child of the occupation, grew stronger and more influential by waging similar attacks on Israel that infuriated the PA.

The Jihadist groups are the disfigured child of the status quo, created and sustained by the blockade and Hamas’ autocratic rule. They are a swamp that engulfs mentally and emotionally vulnerable people –- and one that could be drained if even a little hope were restored to the citizens of Gaza.

In the old days, Palestinians might have desperately cheered the potential pressure that the projectiles seemed to put on Israel to lift its suffocating blockade on Gaza. However, three military confrontations with Israel have served only to tighten the siege even more, reducing the enclave into ruins.

This is Gaza’s vicious cycle, where the status quo radicalizes more people, and as their numbers increase, and rockets fly, the blockade tightens up even more.

The Real Target Of Gaza’s Rockets Is Not Israel