The Notorious R.B.G., Live And In Person 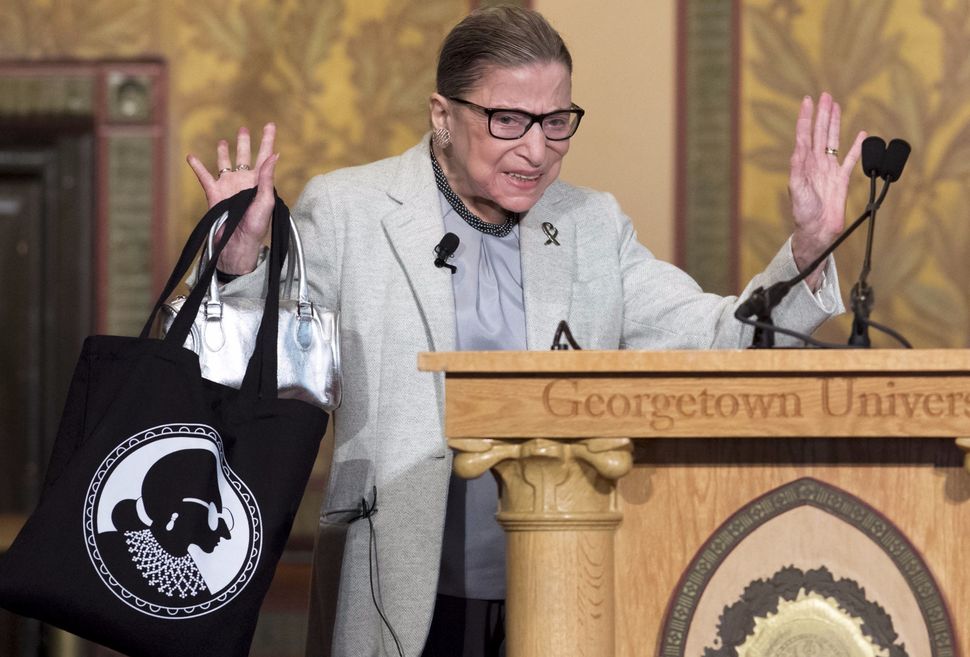 She’s 84 years old, a stooped, frail two-time cancer survivor, grandmother and widow, with a job that requires discretion and neutrality and is so guarded that she and her colleagues wear the same-looking black robes in public. Yet Ruth Bader Ginsburg, associate justice of the United States Supreme Court, has become an unlikely, intergenerational rock star, known to her older fans as the Thurgood Marshall of the women right’s movement and to millennials as Notorious R.B.G.

And it will be my honor to interview her on stage at Congregation Adas Israel in Washington on February 1.

This amazing opportunity came through the good graces of Kathleen Peratis, a member of the Forward’s board of directors, who succeeded Ginsburg as director of the Women’s Rights Project at the American Civil Liberties Union in 1974 and has been a friend and professional colleague ever since.

Adas Israel has a cavernous sanctuary — up to 1,200 seats, I’m told — and even so, tickets to this event sold out in just a few days. (The relatively modest ticket price goes to cover the costs of the event; Supreme Court justices are not permitted to participate in fundraisers.)

But don’t despair if you weren’t able to grab a ticket! The Forward will be live streaming the event on our website starting at 7 pm EST. RSVP here if you’d like to tune in. And if your fascination with the oldest serving woman on the court extends to your friends, the Forward is encouraging readers to host “watch parties.” Here’s how.

Although I’ve had the honor of meeting Ginsburg before, in her Supreme Court chambers and at my former job at the National Constitution Center, this will be my first time interviewing her, and it’s, well, daunting. I’ve been reading books and articles, watching videos, and collecting ideas for questions. (Just for fun, check out this video of a much, much younger reporter trying to keep up with Ginsburg’s regular work-out routine.)

And I can use some help. This is where you come in.

What would you like to ask this veteran justice, who is at once soft-spoken and outspoken? What interests you most about her history and character? If you are a critic, how should I challenge her? (Politely, of course.) If you are a fan, what would you most like to know?

Go to the links above and offer your own questions. I’ll try to incorporate as many as I can into the conversation.

What I’ve been writing. I’ve made it a practice during the last tumultuous year not to respond publicly to every outrage emanating from the White House. My rationale is that there are already enough — actually, too many — critical voices and the world doesn’t need another one unless I have something distinctive to say.

To stay silent about President Trump’s racist comments last week, however, is to be complicit. Which is why I wrote this opinion piece, to make what I hope is a fresh point about Trump’s fundamental absence of gratitude as the explanation for his deeply flawed leadership.

This insight came from Rabbi Shai Held’s new book of Torah commentaries, which I confess to reading in synagogue on Saturday when I probably should have been paying attention to the service. But something good came of it, anyhow!

A parent’s worst nightmare. The unfolding, tragic story of Blaze Bernstein, a smart, kind and enthusiastic sophomore at the University of Pennsylvania who was murdered near his California home on winter break, dominated reader interest last week. For me, it struck painfully close, as I had the privilege of meeting his remarkable parents last summer.

Even as they cope with their immense grief, Gideon Bernstein and Jeanne Pepper have set up an extraordinary online tribute to their son and are using it to celebrate his life and memorialize his death. As Jeanne wrote on Twitter: “His life was short but the message is clear: we all have a story, we all can make a difference, we can all dream of a better world… this is a message of hope. We can all repair the world in our own way. #Dogood4blaze.”

Looking forward. Vice President Mike Pence is scheduled, once again, to visit the Middle East next week. Look for an essay from me examining how white evangelical Christians are directing this administration’s Israel policy — and what that means.

The Notorious R.B.G., Live And In Person