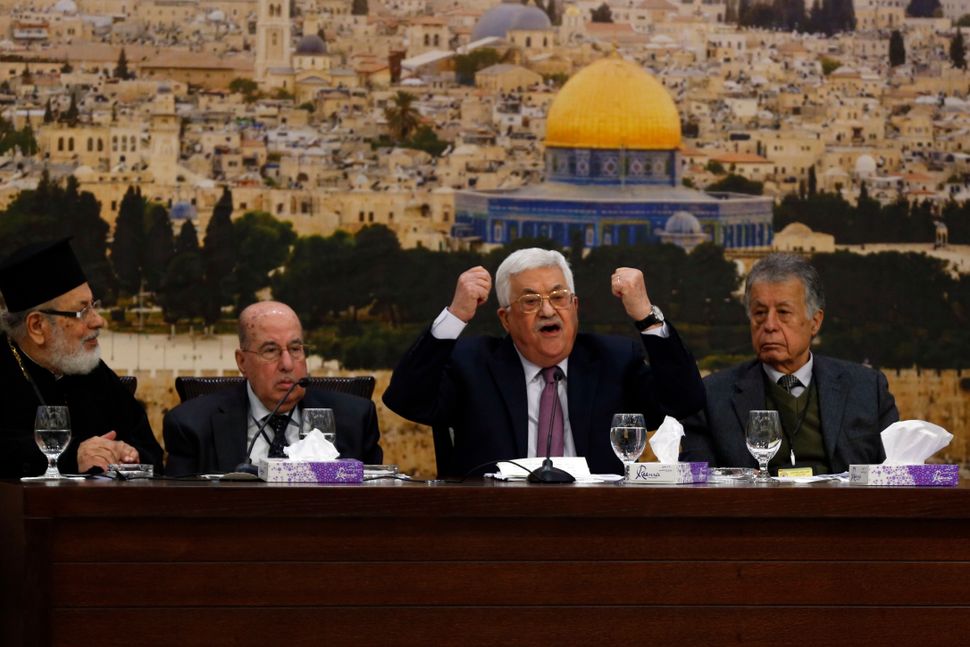 Even if there might be reasons for his rage, Palestinian Authority President Mahmoud Abbas’s series of statements over the last few days cannot be dismissed, ignored or justified. They provoke anger, dismay and condemnation because they give voice to the most insidious, damning accusation against Jews: That we have no valid claim to the land of Israel.

Just today, speaking at a summit in Cairo, Abbas declared that Palestinians were the “original Canaanites” and trace their history back to Jerusalem before the Jews.

In a characteristically long speech in Ramallah on Sunday, Abbas defamed Zionism by asserting that the 19th century movement all began with an attempt to rid Palestine of Palestinians.

“This is a colonial enterprise that has nothing to do with Jewishness,” Abbas told the Palestine Liberation Organization’s Central Council at the opening of its two-day gathering. “The Jews were used as a tool under the concept of the promised land — call it whatever you want. Everything has been made up.”

Abbas did save his harshest words for President Trump, for recognizing Jerusalem as the capital of Israel, for threatening to cut U.S. aid to the Palestinians, and for appointing as his ambassador to Israel a man who is aligned, even in office, with right-wing Israeli politics.

Given the posture of the Trump administration in the last year, Abbas could possibly be excused for directing his rage in Washington’s direction; it is difficult to see how the U.S. administration can anymore be viewed as an honest broker of the Israeli-Palestinian conflict .

Both he and Israeli Prime Minister Benjamin Netanyahu have stayed in office for so long by brilliantly playing to their respective political bases, and in that sense, Abbas’ speeches can be viewed as a blustery attempt to divert attention from his narrowing foundation of support. Abbas remains extremely unpopular — a Palestinian Center for Policy and Survey Research poll at the end of last year said that 70% of Palestinians thought he should resign.

Still, it is what he said about Jews and Zionism that is most objectionable. At the heart of the conflict in the holy land is an inability on both sides to recognize and respect each others’ narratives. Those of us who believe in a two-state solution, anchored by a creative way to share Jerusalem, do so because we believe that Israelis and Arabs, Jews and Muslims and Christians, have ancient connections to the land that deserve to be expressed through contemporary political sovereignty.

When Israelis and other Jews have sought to deny or erase Palestinian connections, we call them out.

And when a Palestinian leader — embattled in part by his own doing — asserts that somehow Jews were forced to go to Palestine after the Holocaust, we call him out, too.

Honestly, I’m not even sure what Abbas meant when he said on Sunday: “The Jewish didn’t want to come to Palestine even after what they went through in Europe, with pogroms and even after the Holocaust. They didn’t want to come but [Theodore] Herzl said that anti-Semitism served the purposes of Zionism. That way Europe and the Zionist movement profited twice — the Europeans got rid of the Jews and the Zionists got to bring Jews here — what’s what happened.”

If Abbas really thinks that is what happened, then he has no business pretending to be a partner for peace. And if he is repeating ugly rhetoric only to please his ever-thinning crowds, then such irresponsibility also disqualifies him.

We know that Abbas, like other leaders in the region, have uttered reprehensible words before, and — just like with President Trump’s tweets — it is sometimes difficult to know how seriously to assess those words.

But the region is far too unstable now, and the Palestinians too bereft of real leadership, for their president to engage in such vitriol. It further isolates him and emboldens those who continue to ignore the plight of his people.

“Don’t abandon us,” Abbas pleaded in Cairo on Wednesday. Well, then, don’t give speeches like this.