How Mike Pence Is Changing The Definition Of ‘Pro-Israel’ 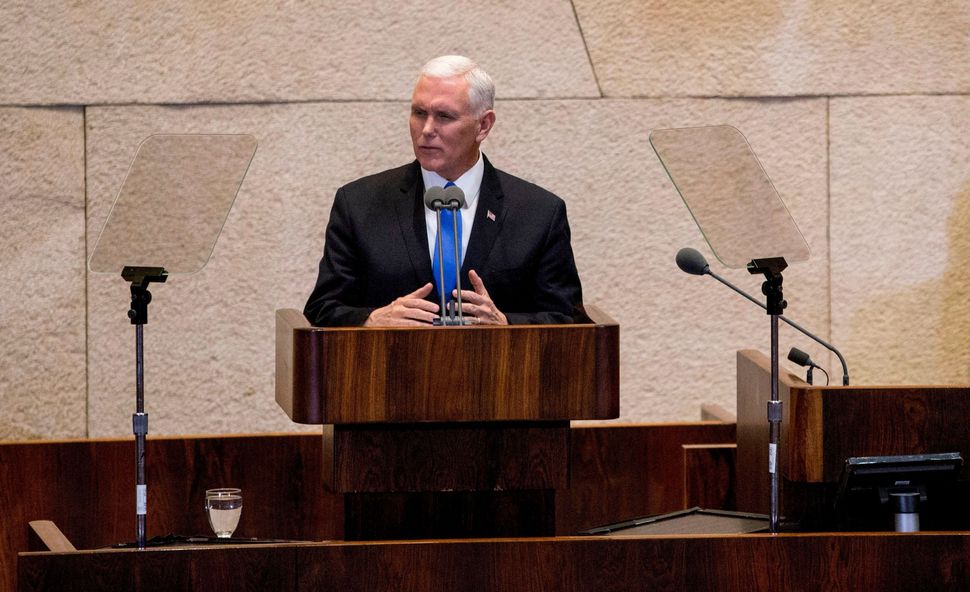 With his long, formally delivered speech before the Israeli Knesset today, Vice President Mike Pence has dramatically redefined what it means for an American administration to be “pro-Israel.”

I’m not a fan of the term in any case, because there are many ways to love and support Israel, and no one leader or group should be allowed to define that for everyone, everywhere. Yet it has, unfortunately, become a litmus test in too much of the American Jewish community, and that test just became more limited and more faith-based with the vice president’s speech.

His new definition starts with some revisionist history. “In the story of the Jews, we’ve always seen the story of America,” he began, recounting a few key moments when Jews were welcomed and their religion praised by early white settlers and subsequent leaders — forgetting, of course, the blasphemy laws, the social discrimination, the refugees turned away, and other moments of pure prejudice strewn through America’s beginning centuries.

In other words, to be “pro-Israel” is to be a certain kind of “pro-American,” in the past and forever more.

Pence’s speech then goes on to reflect his worldview, which is completely in sync with his particular brand of Christian evangelicalism, and leads him to view everything through a strict, biblical lens. I can’t imagine what the secular, avowedly socialist Zionist pioneers would think of his messianic description of the founding of Eretz Israel.

Policy-wise, Pence’s new form of “pro-Israel” is devoid of even a hint of criticism of the Israeli government or the kind of warnings that good friends offer good friends. The word “settlement” never came up. But Iran did, a lot.

And, of course, Jerusalem as Israel’s capital, a unilateral designation President Trump made last month, breaking with decades of American foreign policy.

This is all a huge concern, of course, because Pence and his compatriots are driving Israel policy in the Trump administration, as I explained here, replacing a bipartisan, pluralistic approach with one based on one religious perspective and anchored in one political party.

When that policy becomes more Christian, it becomes less Jewish; as ‘pro-Israel’ becomes synonymous with conservative Republicans, American Jews — still largely identified with the Democratic Party — will move away.

That disconnect is highlighted in the divergent attitude toward the Jerusalem decision, which Pence hailed today as if he were announcing a great deliverance. Yet a survey released last September by the American Jewish Committee found that only 16% of those polled wanted the United States to move its embassy to Jerusalem immediately. Thirty-six percent wanted it moved only in conjunction with the Palestinians, and 44% not at all.

This is AJC, remember, an establishment voice. While Trump’s Jerusalem decision may be wildly popular in Israel, most American Jews don’t support it. It is, however, a long-standing dream of certain evangelical Christians, and right now, that’s who counts.

In his first, tumultuous year in office, President Trump and his administration have attempted to redefine what it means to be a good American, to disastrous results. They are now applying the same crude measure to support for Israel. What gives them the right to decide?

How Mike Pence Is Changing The Definition Of ‘Pro-Israel’