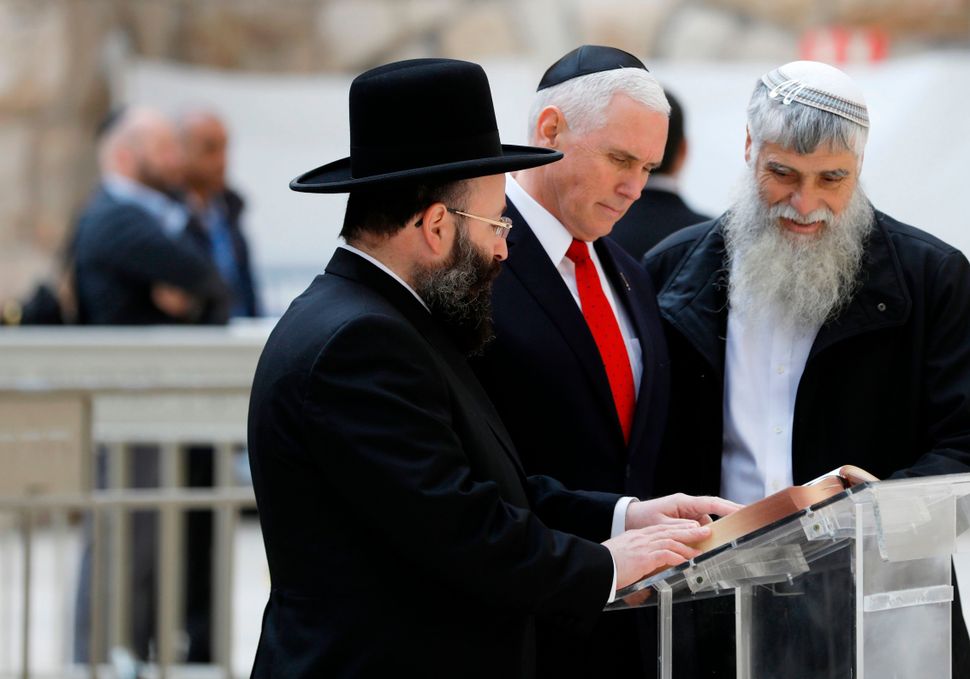 Women were segregated at the Western Wall this week. During Vice President Mike Pence’s visit to the Kotel, female journalists were relegated to the back.

The segregation came not during a religious event but rather during a diplomatic visit. And the women who were sent to the back of the pack were not praying women but rather professional journalists and photographers. They had to stand behind the men and behind a fence and could not see what was happening.

They didn’t take it lying down. As journalist Noga Tarnopolsky who was there, wrote on Twitter, “This was an aberrant first.”

Factually incorrect to say that “keeping with Jewish tradition at the holy site, female journalists were placed behind a barrier.” I have covered many visits; this was an aberrant first. #PenceFence https://t.co/7t7nolErJz

And yet, the episode was not abnormal in a country like Israel, where the exclusion of women has become increasingly normalized, not only at the Kotel but also on planes, in trains, and at cemeteries. But this was still a new low for women.

It was not abnormal for Israel — nor for their guest, Mike Pence. Pence is infamous for his retrograde views of women, brought his views on women with him on his trip to Israel. This is a man who believes that working women stunt their children’s growth. As governor of Indiana, Pence signed a record number of anti-abortion bills, including the infamous HEA 1337 that bans abortion even in cases of unviable fetuses, and demands the burial of all potential fetus remains — including menstrual blood.

As if that weren’t enough, Pence tried to redefine “rape” in a bill in order to limit access to abortion, even for women who would die without care. He also cosponsored the appalling “personhood” legislation that could ban birth control. Politico dubbed Pence a “one man crusade” against women’s reproductive health when he led the campaign to completely defund Planned Parenthood.

From the evil to absurd, Pence once used Mulan as proof that women should not serve in the military. Less funny is the fact that he famously refuses to sit alone with a woman who is not his wife, which would prevent women from working, say, as a chief of staff or as vice president. His refusal to be alone with women also maintains the annoying presumption that women are always a sexual temptation to men, no matter what the circumstances.

Rather than taking a stand against Pence’s misogyny, Israel was quick to accommodate it with their own. In the space of an hour at the Kotel, Pence’s visit became the occasion for sending women back even further than usual by preventing professional women from working side by side with their male counterparts.

Pence’s visit became yet another example of the spread of radical misogyny in political leadership. This should be alarming not only to those who want to hear women’s ideas or who believe women deserve to live freely in the world. It should also be of grave concern to anyone who cares about values such as moderation, freedom, equality, or peace in the Middle East.

And it was a huge betrayal of these values when Israeli President Rivlin gave Pence the highest praise by calling him a “mensch.” In so doing, he betrayed women most of all.

Perhaps some of us have gotten used to this. It is hardly the first time that women have been thrown under the bus in the name of what is “good for the Jews.” We see the suppression of women as a regular sacrifice made on the altar of Jewish “community” or “unity” or even “solidarity”, as if to say, only men count as members of the nation.

It turns out that what is “good for the Jews” is really just what’s good for Jewish men.

But let’s not be fooled. What is bad for women is actually what is bad for the Jews. If women don’t matter, then there are lots of human beings that don’t matter. When the Prime Minister and President of Israel fawn over radical religious Christians or Jews, throwing women under the bus to do it, we can be sure that democracy is no longer sacred.

What is a threat to democracy and basic human rights is also a threat to the future of the region, and the future of our people. We will never have peace in our lives or in our worlds by dismissing as irrelevant half of the population. A vision of the future of Israel or the Jewish nation that is built by trampling on others will never be one of peace, nor one of God. It is merely another vision of male power and control promoted in the name of God.

I look forward to a day when our leaders around the world will understand that women are people too. Only then I will have hope for peace.