No, Israel Is Not Sliding Into Fascism 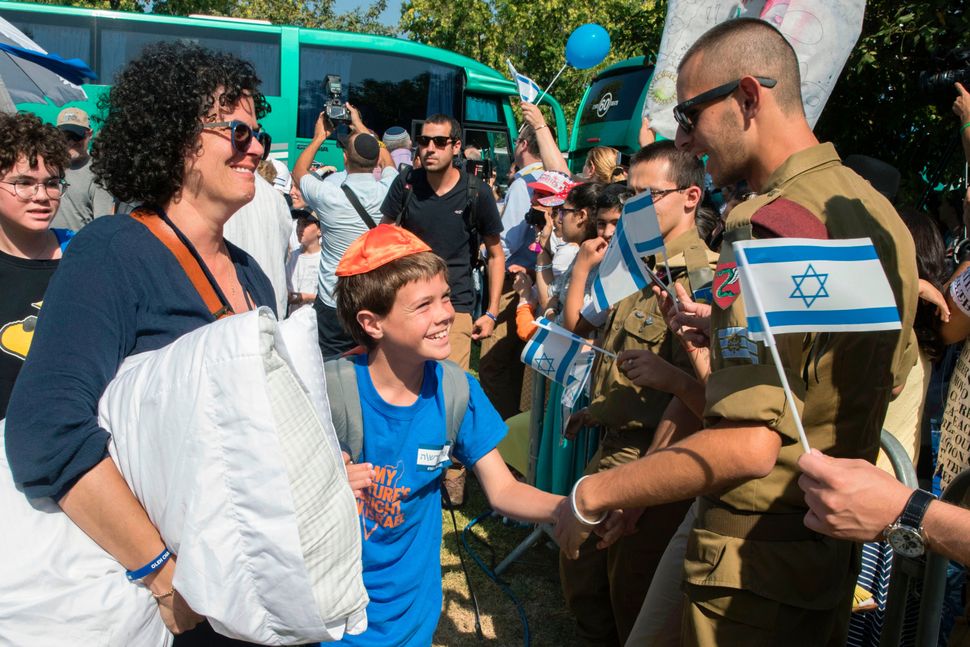 There’s a new meme afoot warning of an existential crisis threatening Israel. According to a growing number of home-bred critics, Israel is no longer a democracy. Nor, according to these people, is Israel in the category of other oppressive regimes, like Saudi Arabia or Iran. Israel has even surpassed merely racist regimes like Apartheid South Africa, and is now fast approaching the very heart of darkness: Nazi Germany.

While Israel has long been compared to Nazi Germany in fringe publications and on Twitter, we are now finding articles making these claims entering the mainstream. And it’s deeply troubling.

Two recent pieces in Israel’s left newspaper of record, Haaretz, are perfect examples of such claims about Israel, as well as of the degree to which are divorced from reality. The first piece, by Dina Kraft, reported that a group of liberal Israeli Rabbis has initiated “The Anne Frank Home Sanctuary” — a program calling on Israelis to hide in their homes illegal immigrants facing expulsion from Israel. The use of Anne Frank’s name obviously intends to imply that Israeli immigration authorities are somehow equivalent to Nazis hunting Jews.

The second piece was an op-ed by Zeev Sternhell, an Emeritus Professor from the Hebrew University, who has authored several studies on Fascist ideas. Entitled “In Israel, Growing Fascism and a Racism Akin to Early Nazism,” the piece looks at Israeli attitudes towards Palestinians and African illegal aliens, ultimately concluding that the way things are going in Israel, “This is how it was with the Nazis.”

Strong stuff certainly. But it’s also absolutely wrong. Sternhell’s argument is based on a combination of hyperbole, hysteria, and category errors.

Sternhell’s proof of Israel’s “monstrosity” resides in the “actions” of second-tier Israeli MKs Miki Zohar and Bezalel Smotrich and in the “bills proposed by Justice Minister Ayelet Shaked.”

On closer inspection, these “actions” turn out to be interviews given by Zohar and Smotrich. It’s true, they have said some idiotic things. But as anyone familiar with politics will tell you, such interviews are not to be taken seriously. They certainly do not make laws or policies of governments, and the fact is that neither Zohar nor Smotrich has actually passed a single bill or Knesset committee resolution in this vein.

As for Shaked, her allegedly monstrous “Nation-state law”, which determines Israel to be the nation state of the Jews, explicitly states Israel must be a democratic Jewish state “in the spirit of the principle of the Declaration of Independence.”

These are the “monstrosities” branded by Sternhell as harbingers of “not just a growing Israeli fascism but racism akin to Nazism in its early stages.” For Sternhell, it is clear that Zohar and Smotrich, as well as the Likud governing party and by extension the Israeli government and perhaps most Israelis, wish to deprive Palestinians of their “basic human rights, such as self-rule in their own state and freedom from oppression,” or of “equal rights in case the territories are officially annexed to Israel.”

But it has been a persistent policy of most Israeli governments, both Labor and Likud, to oppose a national right of self-determination to Arabs in the land of Israel – preferring to offer them individual civil rights as citizens or a degree of autonomy perhaps in a confederation with Jordan. This was the view of Ben Gurion and Golda Meir, it was the view of Menachem Begin and Ariel Sharon.

Were they all Fascists and Nazis?

Israel is certainly not a perfect place. Like any democratic state, it has its fair share of problems, conflicts and quirks. But a democratic society with problems is a far, far cry from a non-democratic one; and an even further cry from a fascistic one.

But this basic category error – that a democracy with a few problems is equivalent to fascism – is not Sternhell’s invention. In fact, those who oppose democracy have often used a democracy’s compromises to claim a moral equivalence between those democracies and the deliberate evil of dictatorships.

The actions of democracies during WW2, such as the British “area bombing” of German cities and the US internment of Japanese Americans, were and still are used quite often by spokesmen for dictatorships to allege a moral equivalence between the western democracies and the Nazis. Maybe, so the narrative goes, the Nazis weren’t so bad if Churchill and Roosevelt were just as bad as Hitler?

To try and claim moral equivalence between the Nazis and even the most controversial actions taken by democracies defending themselves against mortal attacks — actions that however misguided are altogether of another order of magnitude than the deliberate planning and executing of genocide — is to erase the distinctions that make some humans into murderers.

Israel is often pushed to take unappealing measures to fight threats to its civilian population. These actions sometimes cause discomfort and even suffering to the Arab population of Gaza and the West Bank. But these discomforts are for security purposes. Military actions or even restrictions on supplies to the Gaza strip have as their only goal stopping the indiscriminate attacks on Jews and Arabs in Israel. And even while it is repeatedly attacked, Israel still goes to extraordinary lengths to avoid civilian casualties, and whenever there is a chance, it tries to ease the lot of civilian suffering.

Rather than increasing its fascistic treatment of its minorities, Israel only continues to do better and better in this regard. From its very first day, the Jewish state had to contend with almost impossible conditions, which it did successfully, though at a price. For the first 18 years of its existence, following a hard-fought independence war and continued threats to its existence, Arabs who were left under Israeli rule received citizenship but were subjected to military rule, which was only discontinued in 1966. Moreover, as the young state devoted all its resources to its defense and to absorbing the tide of Jewish refugees from Arab countries, which doubled the population in a few short years, Israel’s Arabs were short-changed in many economic and social aspects.

But the last two decades there have seen growing efforts and investments by the government to better the lot of Israel’s Arab citizens. For example, the Council for Higher Education (of which I am a member), has led a successful effort to massively increase the percentage of Israeli Arabs in higher education, especially women. Meanwhile, the Israeli government has put into place various affirmative-action programs devised to increase the number of Arabs in civil service and in various government boards and bodies.

As for Israel’s policy towards illegal aliens (often termed refugees or asylum-seekers, though only about 10% of them have ever requested refugee status) mainly from Africa, it is in fact quite in line with what governments in many western countries are implementing, including the US and Britain. You might like it or you might not, but it is ludicrous to regard it as Nazism or as somehow peculiar to Israel. If so, we might ask, why are there not “Anne Frank Home” sanctuary initiatives in the US or Britain?

But by far the worst claim Sternhell makes is one oft repeated by others using the “Nazi” clickbait articles to describe Israel: the claim that the views and actions of Israelis are “eroding the moral legitimacy of their existence as a sovereign entity.”

In other words, Sternhell and others believe that the very legitimacy and existence of the Jewish State might be put into question by its policies. The argument that a country would lose the very legitimacy of its existence in such circumstances is not only ludicrous, it is immoral when raised only in the case of Israel, as if the Jewish state has some kind of special taint that has to be atoned for, before it is allowed “legitimacy”.

I like to assume that underneath it all, the intentions of Sternhall and his ilk are good, and it is only in service of his apprehension for Israel’s future that he misarticulated his claim about the Jewish state losing legitimacy for existence, intending only the danger we face from those who bear us ill will.

Nevertheless, it is to be hoped that it will dawn on Sternhell et al where the road he is paving with his good intentions, leads to.

Ofir Haivry is the Vice-President of the Herzl Institute in Jerusalem, and a member of Israel’s Council for Higher Education.

No, Israel Is Not Sliding Into Fascism