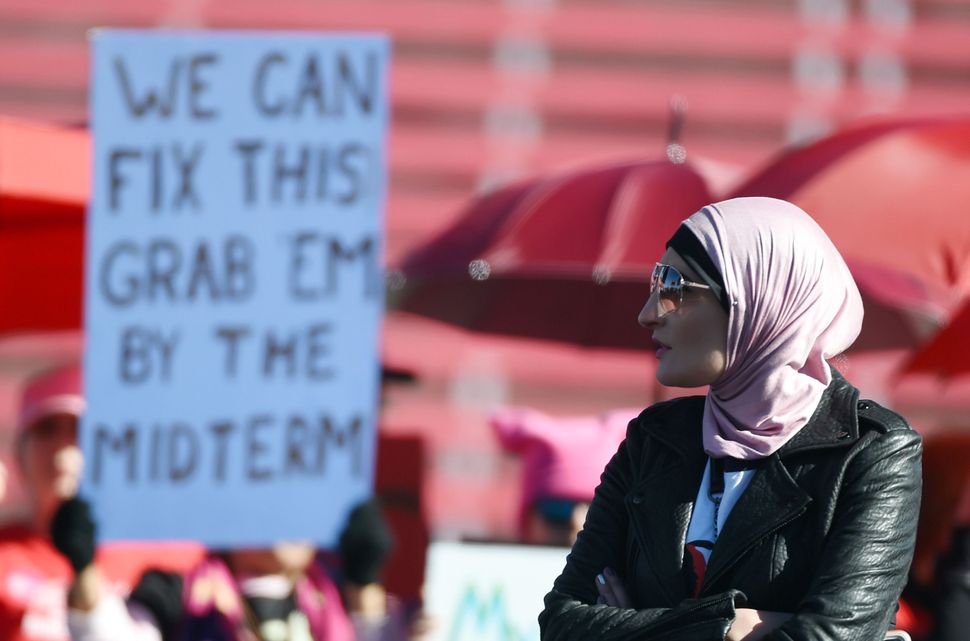 Last week, American Zionists were told they could not be part of the feminist movement — again.

A number of pro-Palestinian groups, most notably the Palestinian American Women’s Association, boycotted Saturday’s L.A. Women’s March. They wouldn’t attend due to the fact that actress Scarlett Johansson, known to be a proud Zionist, was one of the speakers.

Hardly a unique episode, the boycott of last week’s march was reminiscent of events following last year’s Women’s March in Washington, D.C. Linda Sarsour, one of the march’s organizers and a supporter of the Boycott, Divestment and Sanctions movement against Israel, rejected the possibility of Zionists taking part in feminist struggles. According to Sarsour, Zionism and feminism are mutually exclusive.

Then there was the time that three women were ejected from the Chicago LGBTQ march simply for carrying rainbow flags marked with a Star of David. The women were told that the flags made people feel unsafe and that support for Zionism was, again, somehow irreconcilable with the march’s anti-racist agenda. Making matters worse, the parade organizers attempted to rationalize their decision by claiming that Zionism was “an inherently white supremacist ideology.”

Most recently, last week, the founder of the website MuslimGirl, Amani Al-Khatahtbeh, declined an award from cosmetics giant Revlon because Israeli actress and Hollywood star Gal Gadot serves as their “new brand ambassador.” Gadot’s full-throated support of the IDF, like Johansson’s support of the settlements, made her persona non grata.

But Sarsour, the administrators of the Palestinian American Women’s Association, the organizers of the Dyke March and Al-Khatahtbeh have it wrong. Of course Zionism and feminism are compatible. And excluding Jewish women from these movements, or placing a high price on including women like Gadot and Johansson, smacks of the very things we at the Anti-Defamation League fight.

For an organization like ADL, which was founded both to combat anti-Semitism and protect the Jewish people but also to secure justice and fair treatment to all Americans, these manifestations are profoundly disturbing.

Frustration with particular Israeli policies does not excuse an irrational hatred of those Jewish people who support its existence. And yet, this happens all too frequently. These occurrences highlight that anti-Zionism is becoming increasingly visible in intersectional discourse.

Unfortunately, the mistaken idea that feminism and Zionism are mutually exclusive is now becoming almost mainstream. Per this argument, Zionism, as it is manifested today through the State of Israel, constitutes a form of oppression of Palestinian women and is therefore incompatible with the universal nature of support for all women adhered to by intersectional feminists. Some take things even further, viewing the Israeli-Palestinian conflict through a racial lens. In their view, Israel is on the side of “white supremacy,” which is why they believe the issue is of relevance to the Women’s Marches.

Both of these claims are mistaken. They represent an attempt to de-contextualize the Israeli-Palestinian conflict, singling out the Jewish state for this unfair representation. The first does so by presenting the Israeli-Palestinian conflict as unilateral aggression on the part of Zionism, when in fact the Palestinian narrative includes a deep-rooted delegitimization of Israel and Zionism. The right of return for Palestinian refugees would mean the de-facto end of the Jewish state, so as a starting point for negotiations, it demands as a precursor the end of Israel. Furthermore, Israel signed two peace accords with neighboring Arab countries — Jordan and Egypt — and has made serious peace offers to the Palestinians, while the Palestinians have repeatedly failed to demonstrate a commitment to peace. It’s false and unfair to cast Israel as the sole aggressor. Palestinian women are just as victimized by their own leadership — if not more so — as they are by Israel.

The racial argument holds even less water. Not only is Israel full of black and Mizrahi Jews who don’t identify as white (and vote conservatively to boot), but the conflict is not racially motivated at all. It’s the result of security issues which, if they were to disappear tomorrow, would take the tensions with them.

These arguments are attempts to prevent a nuanced understanding of the Israeli-Palestinian conflict, in order to stigmatize Zionism and Israel as its worst manifestation.

As such, they are not only antithetical to intersectionality; they also constitute an attempt to hijack intersectionality in the service of an anti-Semitic agenda. For the vast majority of Jewish women would be excluded from the feminist movement if it takes as a prerequisite that they leave their Zionism at the door.

Excluding a group of women from feminist struggles only because of their support for Zionism, delegitimizing companies which associate themselves with women who are proud Israelis, and expelling women of the LGBTQ community only for wanting to celebrate their Zionist identity are all actions which accomplish the opposite of intersectionality. They turn an inclusive platform that acknowledges diversity within a joint cause and that respects a variety of identities into a means of exclusion and marginalization.

And it’s only Jews who have been excluded.

Alleging that Zionism and feminism are incompatible is not only essentially wrong and reflective of a deep-rooted bias; it is also an injustice to all women who played and continue to play a role in the Zionist movement, including in the top political and military leadership of the State of Israel.

These women have become role models for other women everywhere, and Israel currently stands out as a state in which women hold key positions of power and influence, including President of the Supreme Court and Governor of the Bank of Israel, as well as key ministerial and parliamentary positions. Furthermore, there have never been as many Arab women in universities in Israel as there are now.

All good people must vigilantly call out intersectionality’s betrayal of its own values, and its transition into a means of exclusion under the guise of progressiveness.