At Davos, Trump Turns Middle East Peace From A Promise Into A Fantasy 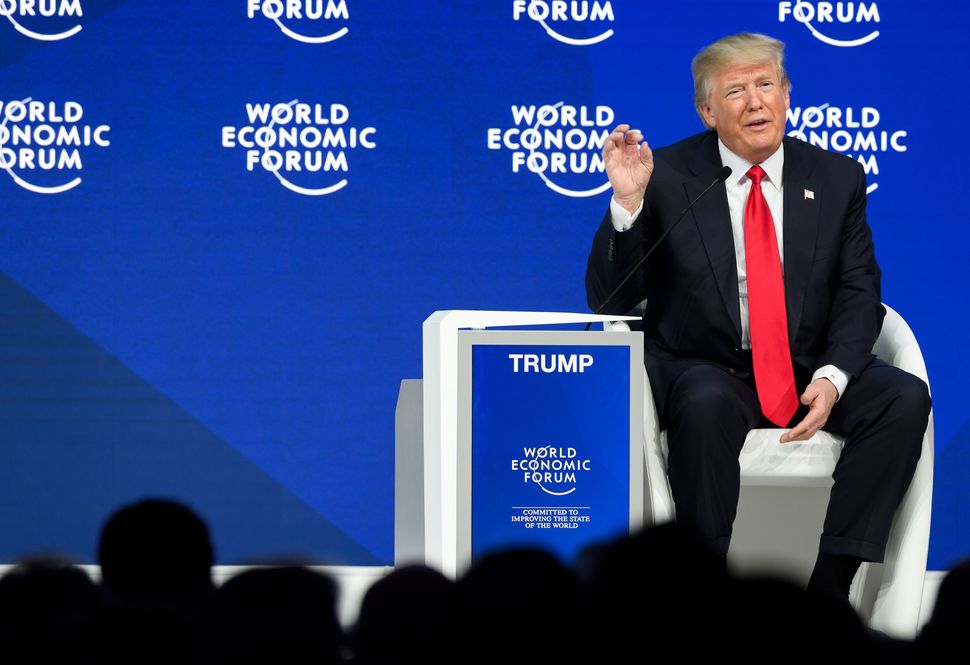 There was never going to be an “ultimate deal” between Israelis and Palestinians in the current environment. But on Thursday in Davos, President Donald Trump made it into even more of a fantasy when he brought up Jerusalem.

“We took Jerusalem off the table, so we don’t have to talk about it anymore,” he said.

The quote further stoked a fire he himself had started. And yet it was just the last in a long list of signs that Trump is proving unable to fulfill his promise to bring peace to the Middle East.

Instead of immediately pursuing his ultimate deal, Trump could have contributed to a genuine peacemaking effort by first pursuing substantial improvements to political, economic, and security conditions on the ground that would enhance the prospects for future negotiations toward a two-state solution, an approach advocated by over 275 retired generals from Israel’s security service. Such a strategy would have required his pushing for meaningful steps to be made by both parties, as well as his own unequivocal support for the endgame of a two-state solution.

Early in his administration, President Trump’s envoy for International Negotiations, Jason Greenblatt, seemed to demonstrate a laudable commitment and seriousness to his work. He was welcomed by Israelis and Palestinians across the spectrum on his numerous visits to the region. He oversaw the development of new projects to expand water and electricity resources in the West Bank. Even Husam Zomlot, the PLO Ambassador to the United States said this week that the early efforts of the Trump Administration were “very promising.” Meanwhile, the inclusion of the Saudis and other regional players into Jared Kushner’s orbit of discussions added intrigue to the Trump team’s nascent efforts.

Recognizing the self-evident fact that West Jerusalem is the capital of Israel while also acknowledging Palestinian aspirations for a capital in East Jerusalem could have been a worthy contribution to the peace process. Instead, Trump recognized Jerusalem as Israel’s capital — without acknowledging Palestinian claims to any part of the city — and signaled his intention to move the US embassy from Tel Aviv to Jerusalem disconnected from any strategy to advance Israeli-Palestinian peace. His initial remarks were careful to acknowledge that the permanent status of Jerusalem’s municipal boundaries would be left to the parties to negotiate. But the president’s own message was immediately undermined when he began to tweet — and to repeat since — that Jerusalem is now “off the table.”

The subsequent tirades from the Palestinians, especially toxic and irresponsible as they were, juxtaposed against the cheers from Israel and Trump’s own base of supporters, has served to fuel the growing American-Palestinian conflict ever since. The presumably good-faith efforts by Trump’s team early in the administration to lay the foundation for their emerging peace proposal have been squandered.

Worse still, the threat of renewed violence has dramatically increased. Despite the conventional wisdom that the Palestinian and Arab reaction to the Jerusalem announcement has been muted, the Shin Bet security service in Israel has reported that terror attacks have since tripled, including a surge in rockets attacks from Gaza. Multiple elaborate attempts to form terror cells in the West Bank have been uncovered in recent weeks.

Most distressing, a poll released this week shows that Palestinian support for violence has nearly doubled in the wake of Trump’s Jerusalem announcement.

President Trump now has a choice. He could work to reduce tensions by taking a number of steps. He could recognize that Jerusalem is indeed the capital of Israel but that Palestinian aspirations for a capital in the eastern part of the city are to be acknowledged and addressed in negotiations — and not contradict himself in subsequent tweets. He could work to rebuild trust between both sides, improving security and economic conditions for Israelis and Palestinians alike while engaging with regional players to revive the prospects of the dormant Arab Peace Initiative. He could state his opposition to Israeli proposals to unilaterally annex portions of the West Bank and to Palestinian steps to internationalize the conflict. He could continue to press the Palestinians on issues of incitement and payments to the families of terrorists, while also re-energizing a constructive role for the Quartet (comprising the US, UN, EU, and Russia) to address issues impacting the Palestinian economy and stalled state-building efforts. He could strongly support the work of NGOs on the ground seeking to rebuild relationships between Israelis and Palestinians at the grassroots.

In short, he could begin to act and speak responsibly while pressing both sides to do the same.

Or, he could heighten tensions rather than calm them. He could insist the Palestinians come to the table to negotiate for an “ultimate deal” even as he claims core issues are no longer worth discussing. He could comment off-the-cuff on sensitive issues that raise doubts about his ability to understand the conflict, let alone oversee a successfully negotiated resolution.

Regrettably, he has so far chosen the latter. If the region is to avoid the potential for a dangerous escalation of violence, the Trump Administration must pursue the former. A responsible leadership role from the United States is sorely needed today in order to calm tensions, not inflame them, and to preserve the prospects for an ultimate two-state deal in the future.

David A. Halperin is executive director of the Israel Policy Forum.

At Davos, Trump Turns Middle East Peace From A Promise Into A Fantasy