Why Are Jews So Pro-Choice? 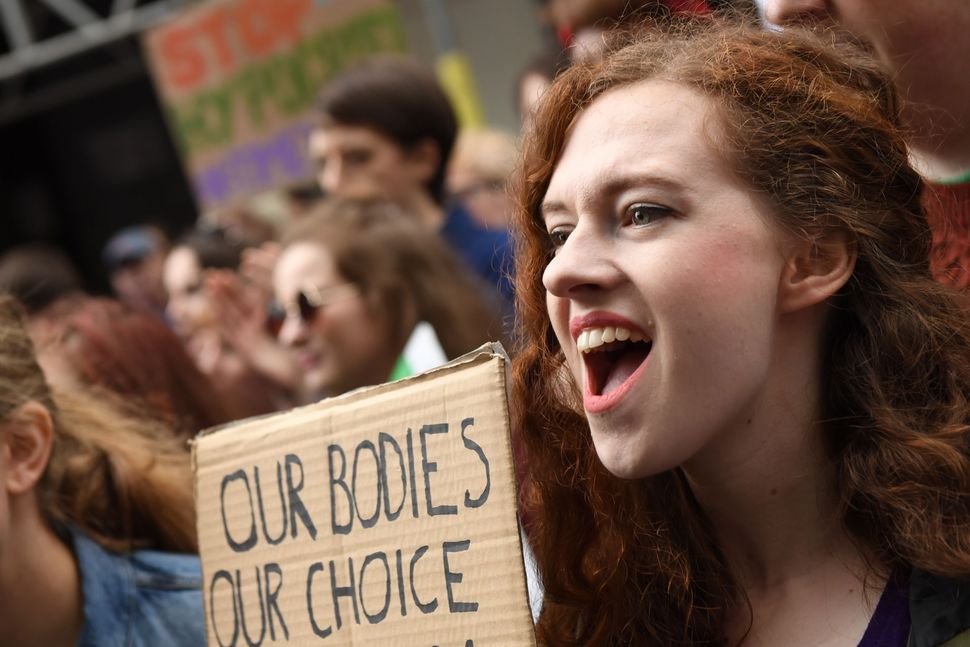 The Senate voted on a bill Monday to ban most abortions after 20 weeks; it failed along party lines.

Just a few days earlier, the latest Pew data estimated that a whopping 83% of Jews believe that in all or most cases, abortion should be legal, putting us at the fourth most pro-choice group surveyed (behind only atheists, agnostics, and Unitarians.)

We beat out every single non-Unitarian Christian group, Buddhists, Hindus, Muslims, and even “nothing in particular,” which evidently is a category distinct from atheists and agnostics.

The national debate about abortion is back, and it’s pretty clear where the Jewish community falls.

There are a few reasons for this, I think.

The first is religious. To put it plainly, Jewish law allows for abortion. For the first 40 days of gestation, a fetus is considered “mere fluid” (Talmud Yevamot 69b), and the fetus is regarded as part of the mother for the duration of the pregnancy. It is not considered to have the status of personhood until birth; the Mishnah (Ohalot 7:6) teaches that if the mother’s life is in danger from the pregnancy, even in labor, the fetus may be sacrificed to save her life, unless the baby’s head has already emerged. Only then, according to Rashi (Talmud Sanhedrin 72b), is the fetus or baby considered to be a nefesh, a soul. Elsewhere, the Mishnah (Arachin 1:4) teaches that “If a [pregnant] woman is about to be executed, they do not wait for her until she gives birth. But if she had already sat on the birthstool, they wait for her until she gives birth.” Birth, not gestation, is the critical marker, here.

In situations where the mother’s life is not in danger, modern and contemporary legal decisors have gone on record permitting abortion when in cases when when a fetus may suffer gravely if carried to term or when a mother’s physical or mental health is in danger, or even when her psychological well-being may be at risk. Some legal decisors are more cautious in their assessment, suggesting that cases must be evaluated individually, and some lean on the side of abortion only in cases of serious or life-threatening medical need, but the permissibility (and even sometimes necessity) of abortion in some cases is a clear thread running through the literature.

For example, Rabbi Eliezer Waldenberg, an important Israeli ultra-Orthodox decisor of Jewish law who died in 2006, wrote in his treatise the Tzitz Eliezer, “It is clear that in Jewish law an Israelite is not liable to capital punishment for feticide…. An Israelite woman was permitted to undergo a therapeutic abortion, even though her life was not at stake…. This permissive ruling applies even when there is no direct threat to the life of the mother, but merely a need to save her from great pain, which falls within the rubric of ‘great need.’”

This body of literature, needless to say, comes in stark and striking contrast to arguments that life—and personhood—begins at conception.

Interestingly, many Christian communities derive their prooftexts against permitting abortion from the Hebrew Bible, like verses about God forming humans in the womb (Psalm 139:13, Jeremiah 1:5, Isaiah 44:24)—texts which don’t even register in the Jewish legal conversation on this topic. To put it simply, we don’t derive matters of Jewish law from Psalms.

Another reason that I suspect so many Jews come down in favor of safe and legal abortion is connected to the fact that we have historically been among the strongest supporters of the separation of church and state, and have long been wary of legal maneuvers that appear to be coming from a place of Christian religious conviction. I imagine that, even among Jews who may be personally against abortion for themselves or think that it’s morally wrong, there may be a reticence to impose their individual thinking on other people, and certainly the country as a whole. Cynthia Ozick put it once thusly: “What our faith communities would be wise to choose is religious responsibility undertaken autonomously, independently, and on cherished private ground, turning their backs on anyone, however estimable or prudential, who proposes that the church steeple ought to begin to lean on the town hall roof.”

I also wonder if our long-standing tradition of embracing machloket, divergent opinions, makes a Jew who feels personally against abortion more able to see the possibility that someone else might legitimately understand the world in a different way, and to value that perspective. This, attitude, too, would favor upholding Roe v. Wade and allowing each individual or community to make the decisions that make the most sense for them. I think, in a lot of ways, we as a community understand what “truth” is in a way that allows for much more complexity, many more grey areas. This may stand in stark contrast to those who understand abortion in clear terms of right and wrong, God’s truth and sin.

Regardless of the reasons for the Pew data, though, it’s likely that this vote by the Senate is only the first of many more engagements with Roe v. Wade under the current administration. Jewish Americans, as all citizens, would do well to be in touch with their elected representatives about issues that matter to them.

Why Are Jews So Pro-Choice?