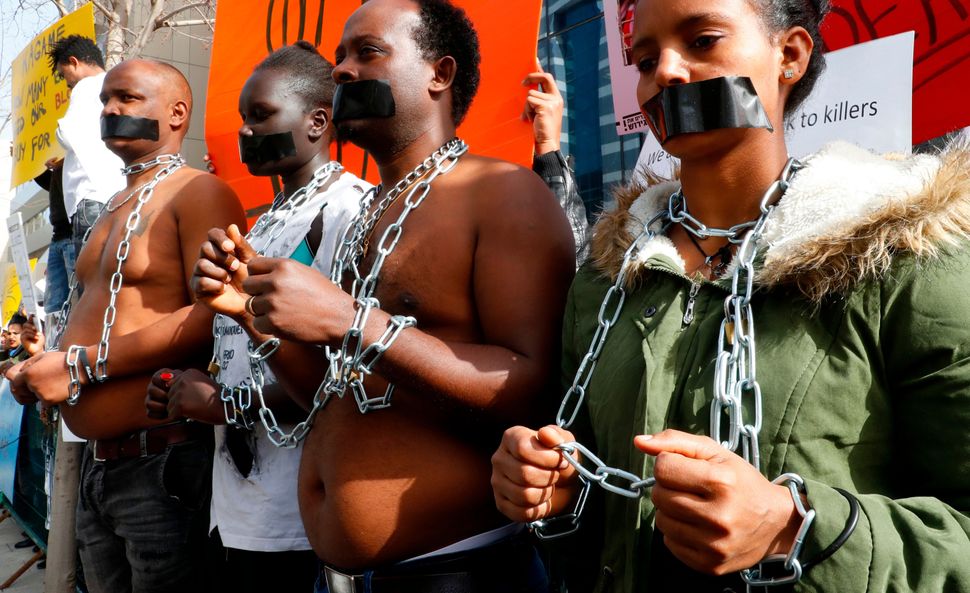 Last week, Isabel Kershner, The New York Times’ estimable Israel correspondent, wrote an article about the Netanyahu government’s decision to either expel Eritrean and Sudanese asylum seekers to third countries or indefinitely lock them up. The article ran under the headline, “Israel Moves to Expel Africans. Critics Say That’s Not Jewish.”

“Like much of the Western world, Israel is grappling with how to balance its right to protect its borders and prevent illegal immigration with showing compassion and humanity,” writes Kershner. “But the government’s decision has struck a particular chord here and among Jews abroad since the modern state of Israel has served as a safe haven for Jews fleeing persecution.”

Kershner goes on to say that many Jews believe the government’s decision violates “Jewish values.” She suggests that “Even secular Israelis have taken to citing biblical verses like Leviticus 19:34: ‘The stranger who resides among you shall be to you as one of your citizens; you shall love him as yourself, for you were strangers in the land of Egypt’.”

There’s a danger here. It’s understandable that Jews would employ Jewish texts and Jewish tradition to critique the policies of a Jewish state. I do so myself. But the subtext of Kershner’s article is that Jews, because of our ethical tradition and history of persecution, are holding ourselves to a uniquely high standard: That while many countries are “grappling” with “illegal immigration,” in Israel — because Jews have an elevated moral sense — the government’s policy of expulsion and imprisonment “has struck a particular chord.”

Liberal Jews may find this flattering. But it’s a trap. It allows hawkish Jews to insist that Israel, living as it does in a dangerous neighborhood, cannot afford to be uniquely moral. Indeed, for more than a decade now, prominent figures in Israel and the Diaspora have claimed that holding Israel to a standard higher than other nations — a “double standard” ppconstitutes anti-Semitism.

The Convention Relating to the Status of Refugees, established by the United Nations in 1951 and signed by the Israeli government, defines a refugee as “a person who owing to a well-founded fear of being persecuted for reasons of race, religion, nationality, membership of a particular social group or political opinion, is outside the country of his nationality.”

That description likely fits many of the Eritreans and Sudanese who have made the harrowing journey to Israel. Many Eritreans are fleeing conscription into a “national service” program that, according to a United Nations Commission, often involves “arbitrary detention, torture, sexual torture, forced labor,” and other “slavery-like practices.” Many of the Sudanese hail from Darfur, where the government and allied militias have killed on such a vast scale that the International Criminal Court has issued an arrest for Sudanese President Omar al-Bashir on charges of crimes against humanity and genocide.

Under international law, once a government deems someone a refugee, it can’t deport them to their home country or, according to most interpretations, any other country where they would be unsafe. Governments are also obliged to treat refugees humanely.

But Israel has gotten around these pesky requirements by refusing to seriously consider the possibility that the Eritreans and Sudanese in Israel might actually be refugees. A January 27 letter to Israel’s Attorney General, signed by 25 Israeli experts on international law, notes that Israel “does not examine, and even systematically rejects, almost all the applications for recognition as refugees submitted by citizens of Eritrea and Sudan.” In 2015, Haaretz reported that less than two percent of Sudanese asylum requests had even received a government response. Not a single one had been approved. Of the more than 2400 Eritreans who requested asylum, the Israeli government granted it to four.

You need not hold Israel to a special Jewish standard to consider this unconscionable. Just compare Israel to other countries. According to the European Stability Initiative, European Union countries in 2015 granted asylum to 90 percent of the Eritreans, and 56 percent of the Sudanese, who sought it.

And it’s not just wealthy European countries that put Israel to shame. Uganda, a country far poorer than Israel, currently houses more than one million displaced people from Southern Sudan. More than 700,000 refugees, most of them Syrian, live in Jordan.

Obviously, many countries treat asylum seekers inhumanely. But according to the Israeli experts on international law, the Netanyahu government will break new ground in April when it requires 15,000-20,000 Eritreans and Sudanese to either accept deportation to unnamed countries (probably Rwanda and Uganda) or go to prison.

“We are not aware of even a single precedent anywhere in the world for a secret removal agreement with a country other than the country of citizenship of the removed person,” the lawyers write.

When the asylum-seekers that Israel sells to Rwanda and Uganda — reportedly for $5,000 per head — arrive there, according to reporting by Foreign Policy and Haaretz, many will be either imprisoned or deported elsewhere.

The point doesn’t only apply to Israel’s treatment of asylum seekers. In establishment American Jewish discourse, it’s taken for granted that Israel’s treatment of Palestinians is, by global standards, benign, and thus, that Israel receives international condemnation mostly because other countries are holding it to a special and possibly anti-Semitic standard.

Israel’s control of the West Bank — the longest running military occupation in the world —- is a flagrant violation of international law. Yes, some of Israel’s critics are unfair or even bigoted. And yes, there’s something admirable about Jews holding ourselves to a higher standard. But the bald reality is this: When it comes to both asylum seekers and West Bank Palestinians, we don’t need a higher, Jewish standard. Simply asking Israel to abide by international law is radical enough.