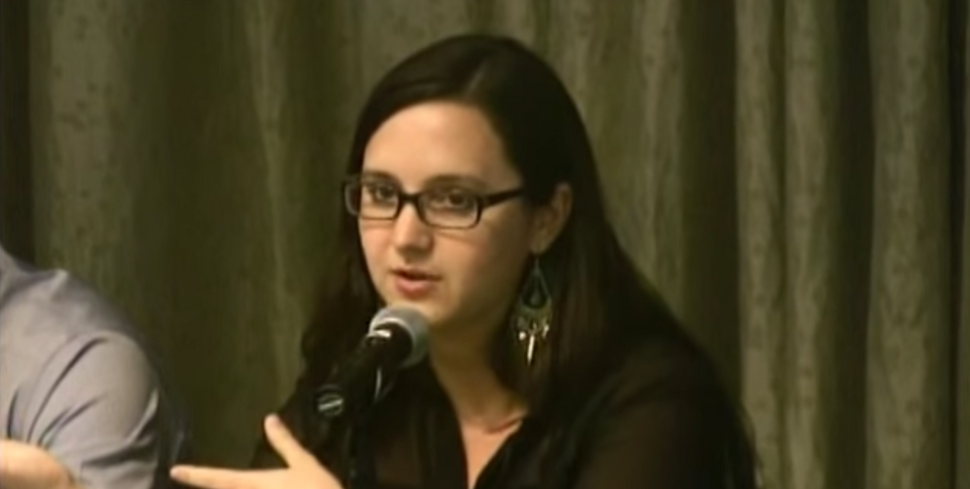 The latest Twitter mobbing by progressive outrage brigades has been sparked by a tweet that celebrated immigrants the wrong way.

On Monday, New York Times opinion writer and staff editor Bari Weiss tweeted a video of U.S. skater Mirai Nagasu landing a triple axel in the Olympic figure skating competition—the first American woman to accomplish that feat. Weiss commented, “Immigrants: They get the job done,” a reference to the lyrics from “Hamilton.”

Nagasu was actually born in California to Japanese immigrant parents. When some pointed this out, Weiss replied that she felt “the poetic license was kosher.” Her unapologetic stance infuriated critics, among them prominent journalists such as Washington Post writer Ishaan Tharoor and free-lancer David Klion. Under a barrage of accusations that her tweets implied that Americans who are non-white or have “foreign” names are invariably immigrants, Weiss deleted her tweet. When she tweeted again to deplore the backlash, the attacks continued.

Do you need another sign of civilization’s end? Here’s one: I tweeted “Immigrants: we get the job done” with a video of Mirai Nagasu’s triple axel. The line is a Hamilton reference. I know she was born in Cali. Her parents are immigrants. I was celebrating her and them. (1/2)

It’s quite true that well-intentioned comments and even compliments can sometimes come out as racial, ethnic, or gender-based slights. It is also true that overzealous language policing can do far more harm than the occasional potentially insensitive comment. The mobbing of Weiss is a prime example.

Full disclosure: I have met Weiss at a party, interacted with her amicably on Twitter, and worked with her twice as an editor (once at the Wall Street Journal, once at the New York Times). Also, I am an immigrant, a former Soviet Jew who came to the U.S. in 1980 as a teenager, and I have had my share of incidents that could be classified, in social justice-speak, as “microaggressions.”

Some were genuinely aggravating, even if not a big deal. Years ago, someone at a dinner in New York asked, “How long since you’ve been back home?” Since the only answer that came to mind was “two hours,” I was genuinely puzzled for a moment until I realized she meant “to Russia.” I simply laughed and said, “Oh, no, home is here”; but inwardly I was piqued. A couple of times, people have asked me what my original name was and then lamented that it was a pity I had anglicized it, because “Katya” sounded much more beautiful than “Cathy” (which, to me, had a “why won’t you stay exotically Russian” subtext).

On the other hand, some experiences that would qualify as “microaggressions” according to diversity literature—such as being asked to teach someone a Russian phrase—have always seemed entirely innocuous to me. It’s all subjective, of course.

But there is one thing I know for sure: I would much rather deal with the occasional well-meaning but insensitive remark than have people walk on eggshells wondering what they can and cannot say around me as an immigrant.

Back to Weiss and her tweet, mocked as “bad and stupid” by the feminist blog Jezebel. To some people, Weiss’s tweet was an example of a mentality that forever regards Asian-Americans (and many other minority groups) as “foreign,” even if their family has lived in the United States for generations. Model Chrissy Teigen, who allowed that Weiss had made a mistake and advised her to “learn” from her critics, described it as “perpetual otherism.”

But was Weiss’s tweet actually wrong? You could argue that it’s not uncommon to use “immigrants” as an umbrella term for both people who come to the U.S. from other countries and their American-born children—often called “second-generation immigrants.” Jewish Telegraphic Agency Washington bureau chief Ron Kampeas pointed out this out on Twitter in defense of Weiss:

This controversy is dumb. It’s not uncommon for second generation (especially Jews) to call themselves immigrants. @bariweiss used “we.” I’m an actual immigrant and I hope my sons regard themselves as immigrants. Her critics frankly sound like Stephen Miller berating Jim Acosta. https://t.co/i9u5hthtjR

There are plenty of examples of such usage—and it’s not just a Jewish thing. A 2007 National Public Radio story about “black immigrants from Africa and the Caribbean” attending Ivy League universities included second-generation immigrants. Last year, the millennial-oriented website Mental Floss ran a piece on “immigrant success stories” from predominantly Muslim countries covered by Donald Trump’s travel ban which featured two immigrants and four people born to immigrant parents (among them Apple founder Steve Jobs). Another recent article on immigrant-founded and -led businesses mentioned both Jobs and Amazon’s Jeff Bezos, whose father was born in Cuba.

Indeed, one of Weiss’s supporters pointed out that on the very day Weiss got pilloried, the Women’s March Twitter account also sent out a tweet celebrating Nagasu with the comment, “Immigrants make America great!”—which elicited no protest. To be sure, there was a significant difference: The Women’s March tweet also described Nagasu as “a daughter of immigrants,” while Weiss seemed to imply Nagasu herself was an immigrant. But if the only problem with Weiss’s tweet was the possible confusion about Nagasu’s biography, surely the reaction was excessive.

To some extent, the backlash almost certainly had to do with Weiss herself. A Times contributor and editor viewed as right of center, she has been a progressive bête noire for a while, all the more so because of her recent criticism of the #MeToo movement. But there is also no question that many people genuinely found her tweet offensive and could have reacted the same way if it had come from someone with impeccably progressive credentials. (Perhaps it’s only a matter of luck that the Women’s March tweet didn’t get denounced.) The main difference is that a progressive would have promptly done public penance, while Weiss insisted that there was nothing wrong with her tweet.

Was the tweet infelicitously worded? Maybe. But to suggest that it makes Weiss a racist is an absurd, contemptible smear—and one that didn’t come only from random Twitter nasties. Jezebel blogger Bobby Finger wrote that Nagasu “occupies a space people like Weiss find painfully confusing: she’s not white, but she’s also American!” Ironically, Finger’s snark seems to imply that to call someone an immigrant is to say that she is not American—which is far more nativist than anything Weiss said.

On a less hostile note, Japanese-American writer Mari Uyehara argued on Twitter that Weiss’s tweet unwittingly bolstered an idea that has a pernicious history—that “Japanese Americans are not true Americans.” Uyehara points out that this notion once led, tragically, to the internment of U.S.-born Japanese-Americans such as her grandparents. She also says that, despite being a fourth-generation American, she herself has been told to “go back to [her] own country.”

But surely nothing in Weiss’s tweet suggested that she does not view immigrants as Americans—quite the opposite. (Indeed, the right-wing site Newsbusters accused her of trying to score a pro-immigration point “using false information.”) And surely the real issue is hostility, not precise language with regard to immigrant status. Telling an actual immigrant to “go back where you came from” is just as vile as saying it to an American-born descendant of immigrants.

I was once the target of a “go back where you came from” remark, some twenty years ago, from a man who thought my mother and I (who were speaking Russian to each other) had cut in front of him at the cash register at the supermarket. Unpleasant as it was, I was heartened by the fact that everyone around us—the cashier and the other customers—was visibly and vocally appalled. These days, I sometimes worry that in Trump-era America, such bigotry is not as roundly and decisively stigmatized as it was then.

But in order to counteract these troubling trends, progressives need to focus our energy on the bigots and their enablers, not beat up on people who support immigrants but refuse to scrutinize every word for possible offense. Incidents like the attacks on Weiss help only the far right, by boosting the perception that we’re in the midst of “political correctness run amok.”