For Desperate Palestinians In Gaza, Rage Has Turned Into Suicidal Despair 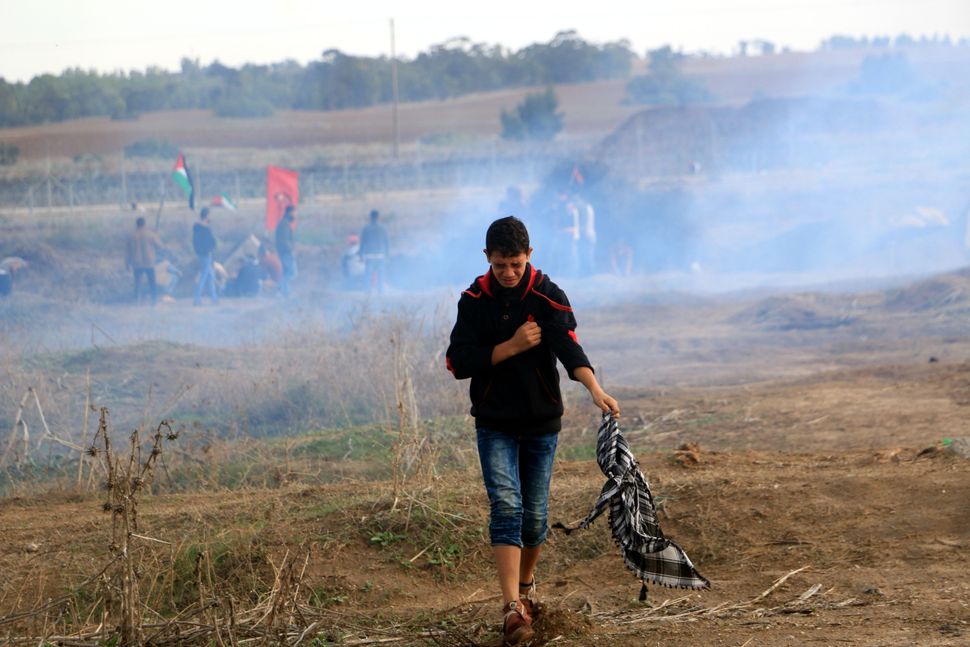 Ever since President Donald Trump’s declaration of Jerusalem as the capital of Israel, there have been warnings of a mass intifada, including recent speculations that a larger crisis is brewing. Israel’s military chief warned that Gaza is on the brink of collapse. And Sami Obeid, an analyst for Gaza’s Al-Manar radio station, told the L.A. Times that the protests could escalate into something far worse.

“People feel that if Hamas doesn’t solve our problems, we’ll come to the fence and lift it,” Obeid said. “Instead of one or two hundred people, you’ll have entire families with their kids, thousands of people who have no other option.”

But the Friday protests are not the site of rage. Instead, they are a place full of despair.

Men do congregate on the Gaza/Israel border. But street protests in Gaza have long been muted, for a simple reason: They are being thwarted by Hamas. Whether through organizing the protests themselves and turning them into staged, meaningless performances against PA president Mahmoud Abbas, or by actively kidnapping, intimidating and silencing “untrustworthy” activist co-organizers, Hamas has been steadily and effectively quashing the expression of Gaza’s rage.

As a source high up in Hamas told me, the Gazan masses “cannot be trusted to protest on their own without leaning to one side against the other.” Even if the crowds were unaffiliated with Fatah, Hamas fears that people are so frustrated with the entire status quo that protests would undermine Hamas’s authority. And it’s a status quo that’s rapidly deteriorating. Food and supplies are in short supply, and bank accounts are dwindling to nothing. There is little to no electricity some days. People are dying waiting for permits to enter Israel for medical attention.

And yet, despite this, Hamas has done a good job of muting the anger and rage many feel. Instead, it is despair that brings young people to the border. Rather than a place to display their anger, the border has become a place where, denied a future, Palestinian youth flirt with death.

I’ve been to these protests many times. This is what it’s like. East of Khan Younis’s poorest village, Khuzaa, and at the Nahal Oz border crossing near war-torn Shujaiya, young protestors approach the fence separating Gaza from Israel.

The emotional uplift of getting this close to “the land of forebears” is indescribable; but the awe of confronting Israel’s defense forces behind the fence, a reminder of pain, loss and suffering, is overwhelming, too.

One suspicious move at the border usually invokes fire from the gatekeepers to warn, intimidate, incapacitate or terminate a potential “threat to Israel’s security”. If the threatening objects increase in number, the IDF disperses the crowd with tear gas, live bullets, or by turning a few of them into cautionary tales whose deaths might convince others to return back into their cage. 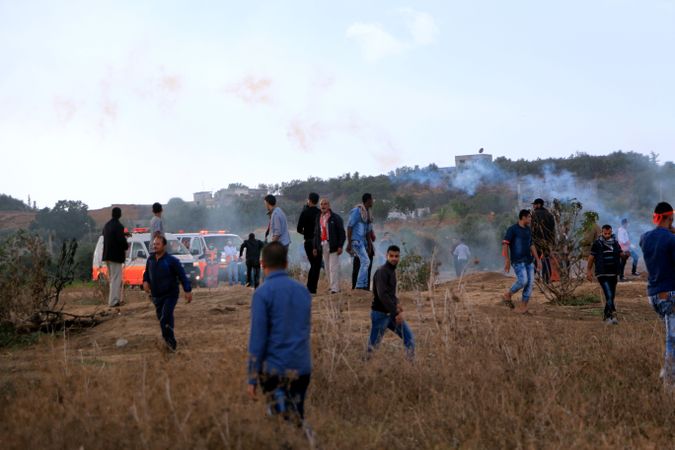 At the borders, a few young men will cautiously march to the front lines, while others watch from a close distance. Men with deep grievances and unspeakable pain set fire to big tires, trying to focus the cameras’ attention on their brothers who advance towards the fence while medics shout at the rest to join in so that the few advancing won’t be easy targets if they approach the fence alone.

Others will join in. I once saw a group of young men, masked with keffiyehs, climb over barbed wire with their chests bare and their arms bleeding while teenagers recorded the exciting scene. They all jumped up and down, shouting with the huge adrenaline rush, not believing that they stepped foot out of Gaza before they were forced back under fire.

For despite the tear gas and the rubber bullets flying their way, the protestors are also full of curiosity, a curiosity that stems from never seeing the world beyond their confinement, not even Israel or the West Bank. Locked into Gaza by Israel’s military blockade, these young men know only the tiny area that they have lived their whole lives.

It’s a mix of anger, fear, excitement and curiosity that one can see at the fence every Friday.

You will see young boys being young boys, teenagers waving and shouting at the soldiers, calling out to them improbably with the only Hebrew word they know: “Shalom.”

Imagine that – a protest of Palestinian boys calling out to Israeli soldiers, calling “Peace.” Some even try to flirt with the female soldiers through the fence – but only when the soldiers take a break from shooting tear gas and rubber bullets. 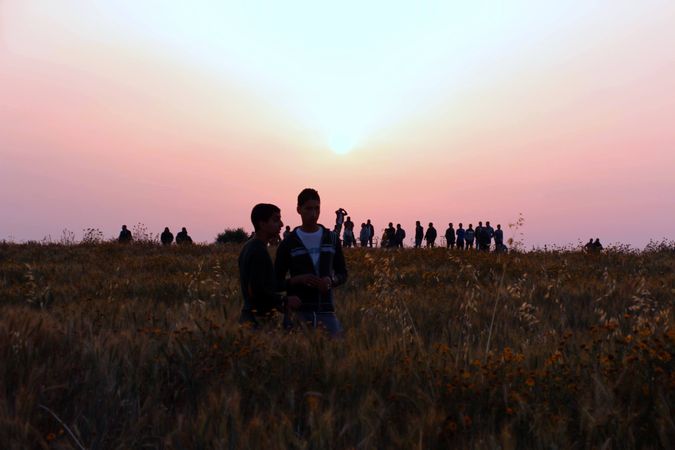 Some walk around asking for cigarettes. Others are busy taking selfies with the soldiers in the background dispersing the protest with tear gas and fire. A handful of young men walk among the protestors selling snacks and Nescafe. And at one recent protest, a man was hard at work cutting a piece of the separation fence to sell as scrap for 50 NIS, “Enough to live on for a week.”

Beneath it all is the despair you feel everywhere in Gaza. It’s there among the young people sitting and sharing packs of lupine and sunflower seeds, chatting about how life closed all its doors in their faces, wondering if their death or injury at the border might be of more use to their impoverished families than their redundant and painful existence. 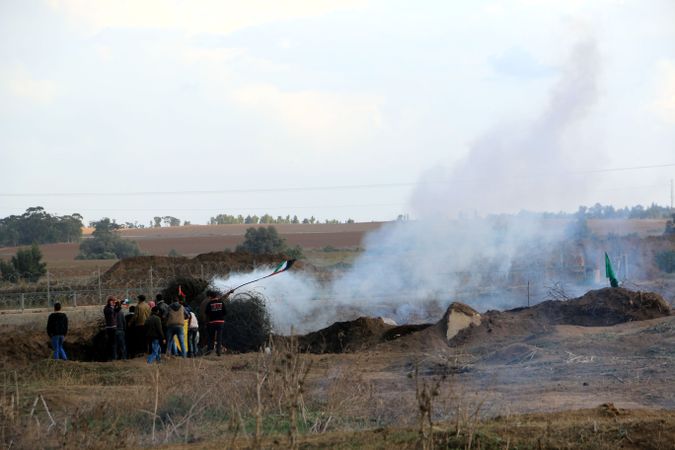 They aren’t only protesting Trump; they are protesting their ever-tightening prison. Gaza’s border-zone is the most forbidden and deadliest part of the blockade. It swallows the enclave’s arable lands and draws the fearsome boundaries of the cage that two million people are imprisoned behind.

As the years go on and the occupation and blockade persist, Gaza’s unimaginably harsh status quo hollows out more and more young people’s spirits.

And always, death is an answer, both a joke and a reality.

“Sick of your life? Two shekels will take you to the border,” as the joke common in Gaza goes.

A couple of months ago, a double amputee named Ibrahim Abu Thuryia made the joke into a reality when he was shot by Israeli forces at a border protest (the Israeli army denies having shot Ibrahim).

I learned from a friend of Ibrahim’s that he marched to the border only after despair got the best of him. He started the day as he did all days, wrestling with destitution, moving in his wheelchair from one shop to the other, begging a few shekels to feed a dozen starving mouths at home. He was turned back empty-handed, not because people were coldly unsympathetic but because solidarity has become unaffordable after ten years of an ever-deteriorating economy.

As his friend tells it, Ibrahim, full of anger and hopelessness, joined the border protests hoping to be relieved of his agony. A few minutes later, he was shot dead between his eyes.

In the old days, the iconic incident of Ibrahim’s death would have sparked an intifada.

These days, Hamas would never allow it.

Hamas’s supporters believe that Hamas’s survival is crucial to the Palestinian struggle; if overthrown, they fear Gaza would turn into a dystopian version of the West Bank — an unarmed population living under blockade, fragmented by settlements with Israeli military jeeps driving through town late at night, storming into people’s homes to arrest whomever they want with no charges.

In fact, the border is the meeting point where young Israeli soldiers stare cautiously at young Hamas combatants. To one another, they’re probably faceless objects of hatred; nevertheless, they share the same objective of maintaining the borders’ tranquility and preventing people from either side from crossing to the other.

There will be no intifada and no mass uprising as long as Hamas persists in forcing the people of Gaza to dance to someone else’s tune. Hamas will see to it that the border remains a site of despair, where Gazans full of rage will go to seek relief from the torture of their lives.

For Desperate Palestinians In Gaza, Rage Has Turned Into Suicidal Despair