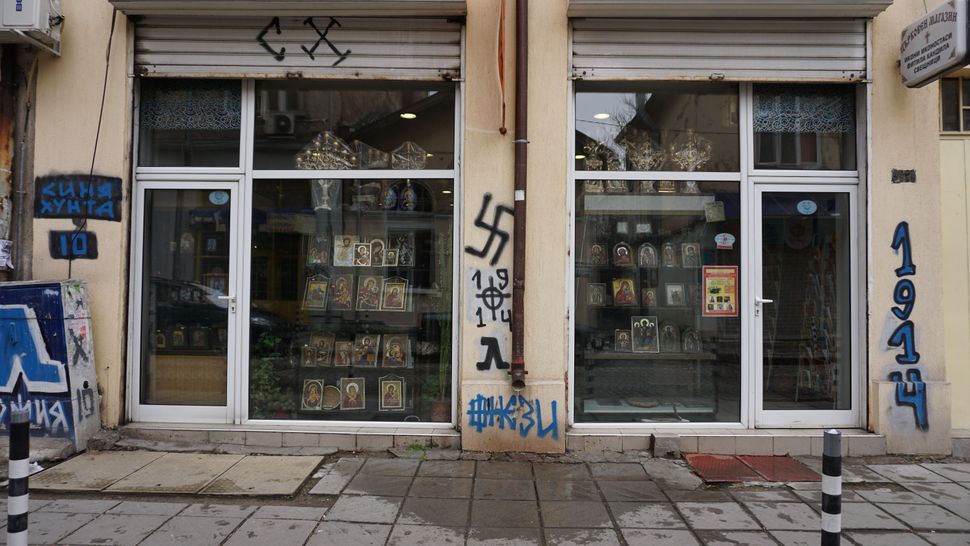 For the sixteenth year in a row, the far-right Bulgarian National Union is organizing the Lukov March through the streets of central Sofia. And they insist there’s nothing anti-Semitic or Nazi-like about it.

The march, which will take place this Saturday, is in honour of Hristo Lukov, a Bulgarian general who led the pro-Nazi Union of Bulgarian National Legions, an organization that in a previous incarnation had a swastika in its logo. Lukov had close ties with Nazi leadership, including Hermann Goering, and was one of the fiercest advocates of Bulgaria’s Nazi-inspired “Law for the Protection of the Nation” that, among other things, forced the country’s 50,000 Jews to wear yellow stars.

Yet they insist there’s nothing anti-Semitic or Nazi-like about it.

Every year marchers from Bulgaria and beyond drape themselves in mourning black, hold torches and chant Lukov’s praises in unison as they wind their way through Sofia’s streets. The march ends at the home where Lukov was assassinated by Communist partisans in February 1943, where the marchers lay wreaths.

This year, the organizers hope to draw up to 2,000 people to the march. And then, a few weeks later, the country will officially commemorate the 75th anniversary of its rescue of its almost 50,000 Jews from the clutches of the Nazis, as well as mourn the deportations of 11,000 Jews from Bulgarian-occupied parts of Greece and Yugoslavia.

Every major political party in Bulgaria has condemned the Lukov March, including representatives from the far-right United Patriots, some of whose members have actually taken part in the march in the past. It’s also earned the ire of World Jewish Congress (WJC) CEO Robert Singer, who called Lukov “the leading Bulgarian promoter of the Holocaust” and urged Bulgarian Prime Minister Boyko Borisov to step in and ban the march. The Shalom Organization of the Jews in Bulgaria and others have also pushed for banning it.

Sofia’s mayor actually tried to ban the march already. But the organizers took her to court and won, so it’s largely a moot point. Banning the march also wouldn’t stop the marchers from meeting up and developing connections with each other; a quick search of their websites shows they’ve been hanging out together for a while, marches or not.

Regardless, this year’s march is going ahead as planned. That’s why it’s important to show the international community what the Lukov March really is: an international meetup for violent neo-Nazis and self-confessed anti-Semites.

The marchers insist that they are not neo-Nazis even though one of the march’s guests of honor, French extremist Yvan Benedetti, was kicked out of France’s far-right National Front after proclaiming in an interview he was “anti-Zionist, anti-Semitic, anti-Jewish.” He insisted at the time he was just being ironic.

They insist that they aren’t anti-Semites even though members of the Nordic Resistance Movement are also coming, the NRM being an organization the Counter Extremism Project (CEP) describes as a “transnational, neo-Nazi organization.” NRM’s affiliated news site proudly describes itself as one that “dares to challenge the old, often Jewish owned and/or controlled mass media empires.”

They maintain that they are not neo-Nazis even though members of a “xenophobic and anti-Semitic organization” from Hungary are coming. The 64 Counties Youth Movement (HVIM) was investigated by Hungarian authorities in 2004 when an article in its official newspaper urged Hungarians to take their “stolen fortunes” back from Jews, and accused Jews of “sucking on our blood, getting rich off our blood.”

They insist they aren’t neo-Nazis even though members of “Die Rechte” (“The Right”) from Dortmund, Germany — some of whose members are coming to Sofia again this year — once asked Dortmund’s mayor to give them the addresses of all Jewish people in the city, claiming it was “relevant for [their] political work.” (The mayor, unsurprisingly, refused.)

They insist they are not anti-Semites even though they’re getting help from international neo-Nazi network Blood and Honour and inviting a former member of Russian neo-Nazi band Kolovrat to play a private concert on Friday night. Kolovrat’s songs, unsurprisingly popular among neo-Nazis, include such subtle numbers as “Our Symbol – Swastika,” “White Power” and “Nazi Ska,” which features lines like “We hate the Jewboy, yeah.”

And still, they still insist there’s nothing neo-Nazi or anti-Semitic about it.

Despite all this, the Lukov March doesn’t seem to worry too many people in Sofia. It’s been going on every year for the last sixteen years, and the march’s devotees remain a minority unto a minority.

Sofia’s residents seem similarly unperturbed by the swathes of swastikas and Celtic crosses spray-painted onto buildings all over the city center, including in the former Jewish quarter, still home to the city’s only synagogue, that seldom seem to be scrubbed off.

But apathy and inattention is just what these kinds of extremists are after. They don’t need to ride high in the polls to start exerting more and more influence on politics in Bulgaria and beyond.

That’s why the King appointed Petar Gabrovski, a virulently anti-Semitic leader of a fringe fascist party, as interior minister. In turn, Gabrovski appointed his equally anti-Semitic protégé Alexander Belev as head of the Bulgarian Commissariat for Jewish Affairs (KEV).

Belev not only became the chief architect of the anti-Jewish laws, but organized and oversaw the deportations of 11,000 Jews to Treblinka from Bulgarian-occupied parts of Greece and Yugoslavia. He’d have sent every single one of Bulgaria’s Jews to their deaths too if the King, the Bulgarian Orthodox church and a host of government officials, intellectuals and ordinary citizens hadn’t stepped in to say “no.”

Michael Colborne is a Canadian journalist who covers central and eastern Europe. His work has appeared in Foreign Policy, Coda Story and Haaretz, among others.