Does Trump Have A New Israel Whisperer? 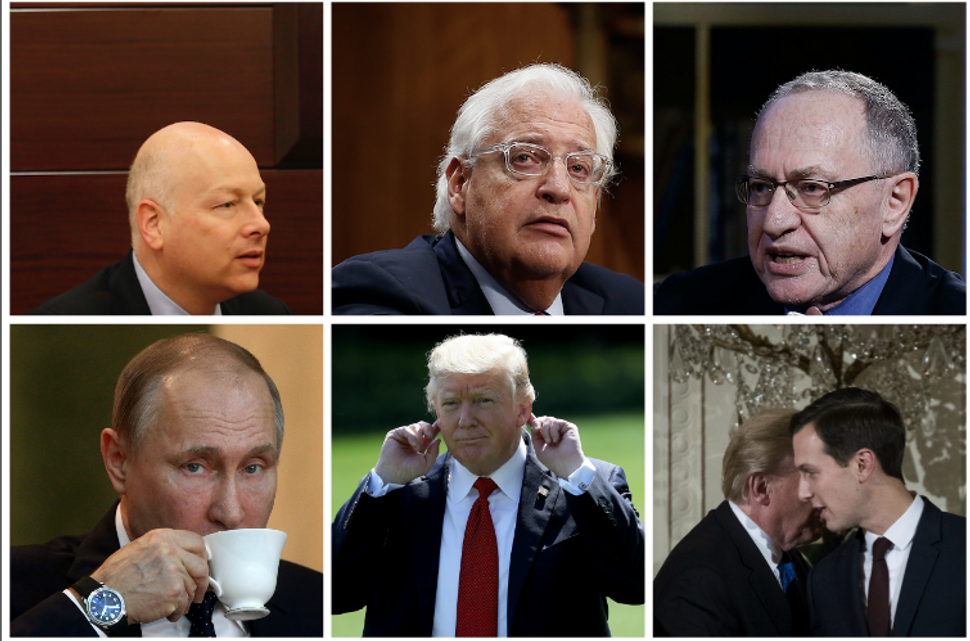 Many who know President Trump have noted what Trump’s biographer Marc Fisher called “the last guy in the room phenomenon.”

“People used to literally hang out in his office for hours deep into the night if they knew that there was a position that had to be taken,” Fisher told Slate. “They wanted to be the last person putting their side of the dispute into his ear.”

Nowhere is Trump’s suggestibility, and his tendency “to echo the words of the last person with whom he spoke,” more clearly on display than when it comes to Israel, a topic about which Trump has shown time and again he knows nothing, and for which he relies on a constantly-shifting network of Trump Whisperers. And it was this network that was thrown into stark relief when the White House took a sharp turn in its relationship with Israeli Prime Minister Benjamin Netanyahu last week.

After a year of support for Israel and Netanyahu, the Trump administration threw him under the bus after Netanyahu claimed to have discussed annexing parts of the West Bank with Trump. The White House was swift to refute the claims, going so far as to call them “false.”

But in so doing, the White House not only humiliated Netanyahu. It may have revealed a hitherto undisclosed Trump Whisperer with opinions about Israel that will now be guiding US policy.

“That’s the ultimate deal,” Mr. Trump said. “As a deal maker, I’d like to do… the deal that can’t be made. And do it for humanity’s sake.”

The lack of specificity and inability to comprehend the situation in the Middle East was holding strong a few months later at a joint press conference with Netanyahu. When asked about his plan for the Middle East, Trump said, “I’m looking at two-state and one-state, and I like the one that both parties like,” he said.

And it was more of the same in a recent interview in Yisrael Hayom, the Israeli newspaper belonging to American Jewish billionaire and Republican-backer Sheldon Adelson. When asked about the peace process, Trump simply rambled.

“I would say the Palestinians are not looking to make peace, they are not looking to make peace,” Trump said. “And I am not necessarily sure that Israel is looking to make peace. So we are just going to have to see what happens.” When asked if the US and Israel are closer than ever, he shifted to his favorite bugbear. “I mean you certainly weren’t very close with Obama, he gave you the Iran deal, which basically is a deal that says let’s ultimately do bad things to Israel. Obama was terrible. He was absolutely terrible for Israel. I think our relationships are very good. I think they are probably as good as they have ever been.”

But Trump’s ignorance about Israel isn’t just embarrassing. It’s dangerous. Absent any true understanding, he is susceptible to “the last guy in the room phenomenon.”

Of course, all presidents rely on advisers on subjects as thorny as the Middle East. But Trump’s list of influencers is as untraditional as it is long. Instead of the Jewish institutional giants that his forebears called upon, Trump has surrounded himself with three little-known Orthodox Jews who were all personal or professional acquaintances before he ran for office.

Trump’s son-in-law Jared Kushner, a real estate mogul, has been charged with securing peace in the Middle East, along with special envoy Jason Greenblatt, an Orthodox graduate of Yeshiva University and Trump’s real estate lawyer for twenty years. Then there’s David Friedman, a bankruptcy lawyer who worked for Trump in that capacity before becoming US Ambassador to Israel.

Alan Dershowitz has also reportedly spoken to Trump about the Middle East. And of course, there’s Vice President Mike Pence, representing the Christian Zionists, and Adelson, whose campaign contribution of $20 million seems to have secured him Trump’s declaration that Jerusalem is the capital of Israel. Ten days before Trump took office, Adelson went to Trump Tower for a private meeting reported in the Times. It was then that Trump told Adelson (or maybe Adelson told Trump) that moving the embassy from Tel Aviv to Jerusalem constituted “a major priority.”

“Since Mr. Trump took office, Mr. Adelson has communicated with him regularly, talking by phone and visiting the White House, and has used his access to push the relocation of the embassy,” reported the Times.

In fact, it may have been Adelson who recommended some of the members of Trump’s Israel team for their White House roles. In a statement Greenblatt and Friedman published on Medium a week before the election — an election they along with the rest of us no doubt believed Trump would lose — Greenblatt and Friedman note that “approximately seven months ago, we were blessed to have been tapped by Donald J. Trump to be his top advisors with respect to the State of Israel.” This would have put their “tapping” in May, when Trump was discussing Israel as a candidate with Adelson and trying to secure campaign funding.

Greenblatt’s and Friedman’s joint statement, which is a list of policy positions with regards to Israel, reads like a Sheldon Adelson/Benjamin Netanyahu wish list, including defining the boycott of Israel as anti-Semitic and moving the embassy to Jerusalem. And it expresses suspicion about a two state solution, “impossible as long as the Palestinians are unwilling to renounce violence against Israel or recognize Israel’s right to exist as a Jewish state.” Finally, the paper promises that a Trump administration will never commit Obama’s cardinal sin of pressuring Israel about the settlements. “Pressure should not be put on Israel to withdraw to borders that make attacks and conflict more likely,” write Greenblatt and Friedman.

For a while, Adelson, Greenblatt and Friedman were the whisperers, and Trump’s policies hewed quite closely to many of these positions.

But there are signs that the last man in the room is no longer an Orthodox Jew.

Last week, the White House humiliated Netanyahu by rebutting Netanyahu’s claim that he had been in talks with the American administration “for some time” on annexing West Bank settlements.

As many noted, it was a shocking divergence. “For a president who has embraced Mr. Netanyahu at every turn, the pushback on Israel was striking,” wrote Haaretz. “Coming two months after Mr. Trump alienated the Palestinians by recognizing Jerusalem as the capital of Israel, it suggests that the administration is recalibrating its approach to the two sides as it wrestles with when, and how, to present a peace proposal.”

But the truth is, Trump has been gently suggesting that Netanyahu back off settlement building for a while. At the joint presser, Trump told Netanyahu that he would like him to “hold back on settlements for a little bit.” And in the Yisrael Hayom interview, he said, “We will be talking about settlements. The settlements are something that very much complicates and always have complicated making peace, so I think Israel has to be very careful with the settlements.”

Who would have been whispering against settlements in his ear? Surely not Sheldon Adelson, nor David Friedman.

Former US Ambassador Dan Shapiro suggested it might be coming from those entrusted with securing a peace deal. “Trump has expressed concerns about settlements before, but he had not done so for some time before last week,” he explained. “Some members of his Middle East team must have seen danger to their prospects of putting out a plan with any chance for it to succeed if Israel moved toward annexation. And apparently, in this case, the President took their advice.”

The idea that it might be Kushner or even Greenblatt warning Trump about the dangers of settlements is backed up by what other sources have suggested, that Kushner and Greenblatt were caught off guard by the Jerusalem declaration, the result of more hawkish whisperers who didn’t have to worry about securing a peace deal. As the Times reported, “Jared Kushner, who is leading Mr. Trump’s peace initiative, argued that to move the embassy then might strangle the effort before the administration had established relationships in the region.”

But the harshness of the White House’s rejection of Netanyahu’s claim was quite a departure from the “good-humored warning” Trump had once issued Netanyahu. “Reports that the United States discussed with Israel an annexation plan for the West Bank are false,” White House spokesperson Josh Raffel said. “The United States and Israel have never discussed such a proposal.”

What could explain such harsh language? Perhaps a new whisperer.

On the same day that the White House was rebutting Netanyahu’s claims about annexation, Trump had a phone call with Russian President Vladimir Putin – about the Israeli-Palestinian peace process.

Furthermore, the conversation about the Middle East, originally reported in the Russian news, was something Putin wanted to be widely known. As Haaretz reported, while hosting Palestinian President Abbas in Moscow, Putin reportedly conveyed to Abbas Trump’s “best wishes.”

It seems at least plausible that it was Putin who told Trump to refute Netanyahu’s annexation claims.

Putin’s interests in Syria are coming into conflict with Netanyahu’s. But this may not be about Syria at all. Putin seems to be injecting himself into the Palestinian issue to push Russian influence in the rest of the Middle East. And speaking to Trump about Israeli settlements may have been Putin’s attempt to stake out yet another Middle East venue where his influence might become more significant than it has been in the past, where it would be more effective to have Trump articulate his desired position than to articulate it himself.

Getting Trump to say what Putin sees as the Russian point of view would certainly be a sophisticated play, one not at all beyond the realm of possibility for Putin. But it’s a play made possible by a permeable web of Trump Whisperers on a topic he knows nothing about.

Does Trump Have A New Israel Whisperer?