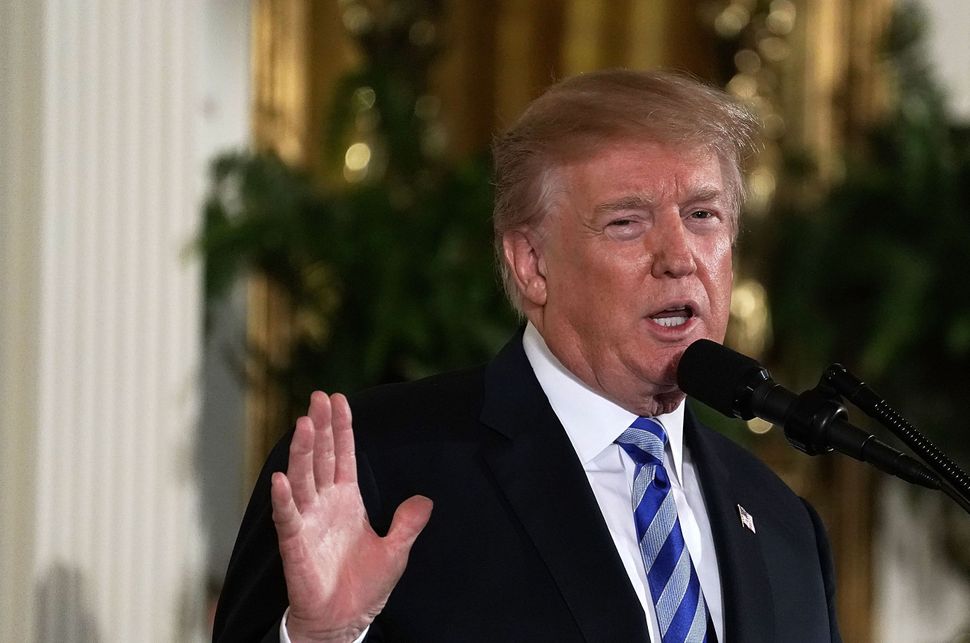 A central and enduring premise of American pro-Israel leadership has always been that any resolution of the conflict between Israel and its neighbors, specifically including the Palestinians, should not be imposed from the outside, but must instead result from agreement between the parties.

It is this principle — that a US administration cannot force a plan on either the Israelis or the Palestinians — that must inform the Trump-Netanyahu meeting on March 5th in Washington.

Jason Greenblatt, President Trump’s special envoy on an Israeli-Palestinian peace initiative, seemed to understand this lesson when he repeatedly noted during a speech on February 7 in Tel Aviv that the United States cannot impose a solution on the two parties.

Yet despite Greenblatt’s rhetorical support for this precept, the Trump administration has spent the past two months violating it at every turn. In its formulation of a policy on Jerusalem that goes well beyond simply recognizing the western part of the city as Israel’s capital and its emerging stance on Palestinian refugees, the White House is doing exactly what Greenblatt claims it is not doing.

It is using the power of the U.S. to force the Palestinians to accept positions to which they have not agreed, and carrying out this plan outside the context of bilateral negotiations.

And while the thrust of Trump’s policy favors Israel’s position on different issues, this approach carries with it two risks that should worry Israel’s supporters.

The first is that if the U.S. were to try and force the two sides into an agreement over the strenuous objections of either or both sides, it is highly unlikely to hold. This will lead to a stalemate at best, and indiscriminate violence at worst. If, for instance, a Palestinian leader is forced at figurative gunpoint to accept a capital in Abu Dis or Ramallah despite not agreeing to give up Palestinian claims on East Jerusalem and over the objections of the Palestinian people, it is not going to result in a lasting peace. It will engender resentment and ill will among Palestinians rather than acceptance of Israel, and it will create incentives among Palestinian politicians to inveigh against the agreement at every turn.

Pushing Mahmoud Abbas into failure by making him look weak and powerless will not get him to strictly adhere to the terms of a peace deal. Worse, it will guarantee that whoever comes after him will take a different, more confrontational, and more violent approach to Palestinian nationalism and Palestinian tactics. Abbas is hardly perfect, but for all of his faults, and there are many, he has been committed to a nonviolent approach for a negotiated two-state outcome, while maintaining security cooperation with Israel. Should he be rewarded for that by being forced to accept concession after concession, the next Palestinian leader will never even take a step down that road.

The second risk is, however, a more combustible one with even farther-reaching consequences. It may be in Israel’s interest now to have a staunchly pro-Israel American president swoop in and dictate terms to the Palestinians, but doing so establishes a precedent that will outlast the current circumstances. Trying to impose a solution on the parties may be in Israel’s favor now, but it may not always be so. If there is one ironclad law of politics, it is that political winds eventually shift. The Oval Office will have an occupant in the future who takes a more skeptical view of Israeli claims and priorities, and when that happens, the Israeli government will regret having used Trump’s inclinations to its benefit in a way that destroys the rules of the game.

This danger is not only limited to American actions. Once the U.S. has established that outside actors can impose their own solutions above the principal parties’ objections, it opens the floodgates for any other country to do the same. Slovenian recognition of Palestine is no different in form than American recognition of united Jerusalem, and not only will more such recognitions of Palestine follow, but other states more sympathetic to the Palestinians may go much farther.

For instance, once the bilateral negotiations paradigm has been violated, there is nothing to prevent European states from determining that the Green Line is an official border and sanctioning Israelis who live east of the line. The law of unknown consequences can and will wreak havoc.

As the U.S. has known since its first involvement in Israeli-Palestinian peace talks, placing our own preferred framework on the table and daring the parties to walk away or face our wrath is not a recipe for success. We can make our views clear and do our utmost best to convince the two sides to accept what we believe to be in their joint interests, as President Clinton did with what became known as the Clinton Parameters, but we cannot force them to agree, nor should we threaten to do so.

President Trump has repeatedly demonstrated his desire to disrupt established ways of conducting foreign policy, but this is a place where he should tread lightly and recognize that just because something has always been done a certain way does not make it inherently bad.

Alan P. Solow is a board member of the Israel Policy Forum, which supports a two-state solution to the Israeli-Palestinian conflict, and a former chair of the Conference of Presidents of Major American Jewish Organizations.