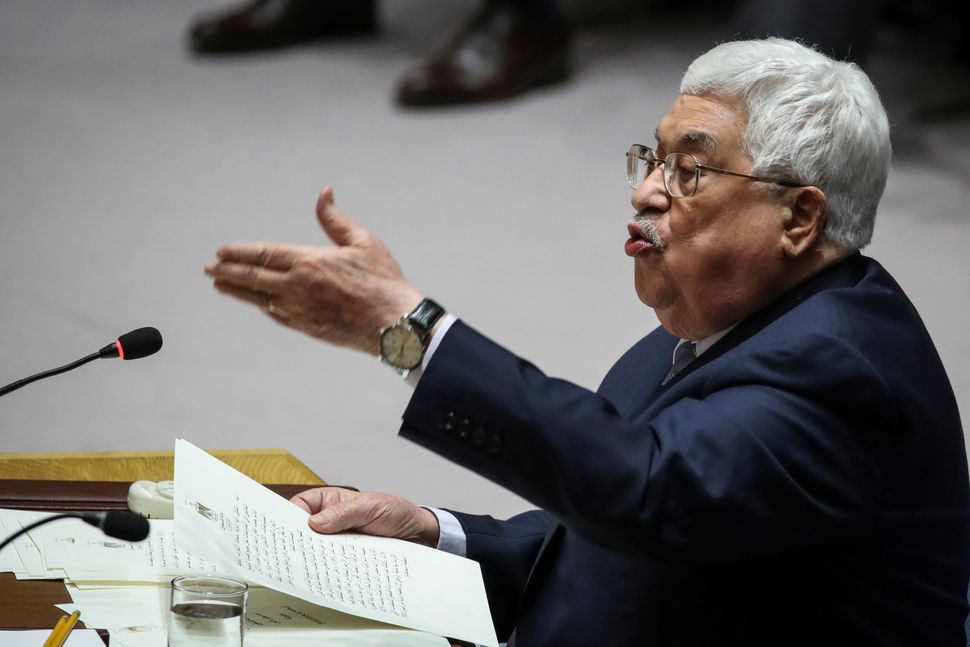 In a landmark speech to the Security Council this week, Palestinian President Mahmoud Abbas issued an important challenge to his American and Israeli counterparts. Laying out explicit support for the two-state solution and a serious proposal for getting there, Abbas raised the obvious question: Why are President Trump and Prime Minister Netanyahu unwilling to do the same?

That’s a question all pro-Israel Americans should be asking right now as well.

For decades, some pro-Israel advocates have argued that the only obstacle to peace is Palestinian rejectionism. Yet with the current US and Israeli governments refusing to endorse the goal of two states, the question should be, who is actually the obstacle today?

Some may choose to maintain the pretext that it’s the only one of the three parties openly calling for a two-state solution that doesn’t really want it. Ignoring the dangerous path being charted by Trump and Netanyahu, they can opt to continue laying blame only at the feet of the Palestinians.

Let’s have no illusions: There is not and never will be a Zionist on the Palestinian side of the negotiating table. Its simply not realistic or politically tenable to expect a Palestinian leader to ever join us in celebrating the Jewish return to the land of our ancestors.

It would also be naive and wrong to make the case that Mahmoud Abbas is the ideal partner. His rhetoric is at times incendiary, and friends of Israel are justifiably troubled by his frequent refusal to acknowledge the Jewish people’s historic connection to Israel or Jerusalem. His hold on leadership is tenuous and his critics are legion.

But as Yitzhak Rabin said, “You don’t make peace with friends. You make it with very unsavory enemies.”

The standard for judging Abbas and Palestinian leadership today isn’t whether they love Israel but whether the positions laid out explicitly this week at the UN Security Council — two states for two peoples based on the 1967 borders with mutually agreed land swaps, a Palestinian capital in East Jerusalem, a commitment to security, etc. — can and should form the basis for ending the conflict.

So we return to the question that should be the core concern of pro-Israel advocates today: If separation into two states is essential to Israel’s future as the democratic homeland of the Jewish people, why do the current Israeli and US governments refuse to endorse the two-state solution and what alternative do they propose?

The answer is clear, though undoubtedly hard for many of Israel’s friends to acknowledge. Prime Minister Netanyahu is fully beholden to the settlement movement, and President Trump to a powerful minority of far-right ideologues who support a one-state future. For these forces, annexation of the West Bank is a dream — and the two-state solution their worst nightmare.

Just listen to one of the settlement movement founders, Yaakov Katz, boast to the AP this week that the settlements experienced record growth last year, thanks in part to the Netanyahu government getting the “green light” from President Trump.

According to Katz, “We are changing the map. The idea of the two-state solution is over… We have to thank God he sent Trump to be President of the United States.”

Or look at the recent comments of David Friedman, now US Ambassador to Israel, and formerly a major funder of the settlement where Katz lives and works. Friedman told a group of Jewish leaders last Sunday that evacuation of settlers from the West Bank as part of a two-state agreement could lead to a “civil war” and stated definitively that the settlers “are not going anywhere.”

This is the same Ambassador who asserts that the settlements are a part of Israel and reportedly requested that the State Department stop using the term “occupation” or “Israeli-occupied territories.”

These are the people driving Israeli and US policy today — against the wishes and interests of the majority of Israelis and pro-Israel Americans.

It is time for those serious about preserving Israel’s Jewish and democratic character to stop bemoaning the lack of a Palestinian partner while making excuses for reckless actions of Trump and Netanyahu that undermine the prospects for peace.

It is time to demand that when the Israeli and American leaders meet in March, they clarify that they themselves are partners for peace and a two-state solution.

One way the president and prime minister could do that would be to respond constructively to the Palestinian proposal outlined this week. If they doubt Palestinian sincerity, then, by all means, they should put it to the test.

Israel and all those vested in its Jewish and democratic future have far too much to lose for them not to try.

Jeremy Ben-Ami is the president of J-Street.