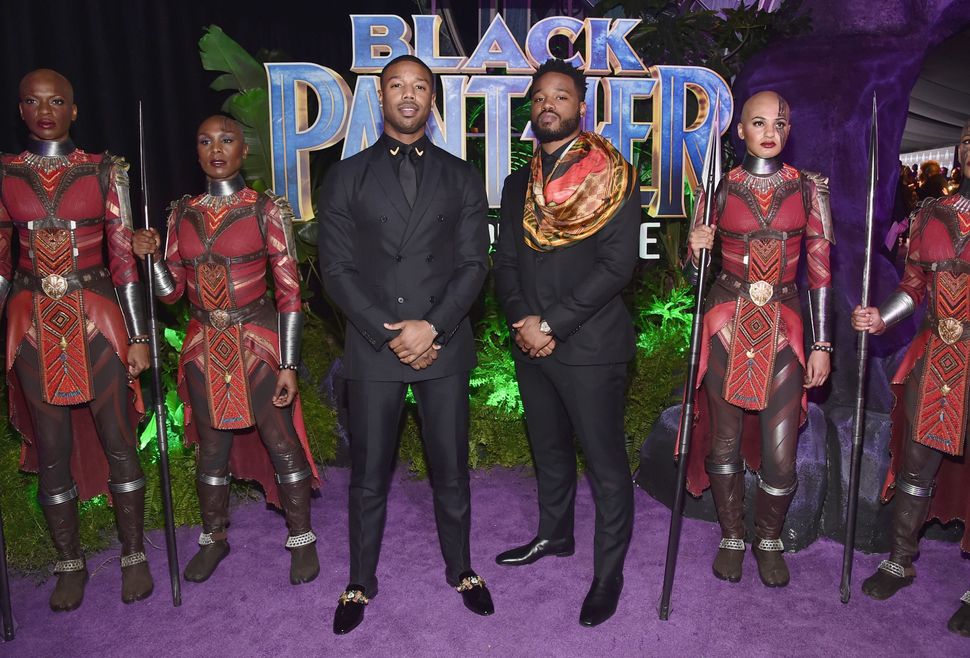 Black Panther is a remarkable movie. The film narrates the origin story of the Marvel superhero known as Black Panther, who hails from the never-colonized mythical African nation of Wakanda. It’s a country rich in unparalleled resources and technology where women play key roles in every success.

The plot of the film takes off when the Black Panther and King of Wakanda, T’challa, is challenged for the throne by his American-born, CIA-trained Wakandan cousin, Eric Killmonger, who seeks to take control of their homeland and use Wakanda’s unique power to right historical wrongs done to Black people around the globe — by any means necessary.

The battle between Killmonger and T’challa represents various overlapping and often competing themes in black political thought, liberation theories, and anti-colonial struggles. And as a Palestinian American, Black Panther’s portrayal of resisting colonialism, racism, discrimination, and militarization, and its grappling with the debate over the morality of tactics, was deeply meaningful to me. Watching the film, I thought a lot about the ways its themes related to me and the context I am most familiar with — Palestine.

Yet while there was a lot to connect to in this film as a Palestinian, it was not a film about Israel/Palestine. And frankly, given the importance of this moment for African-Americans, it would be a betrayal to try to turn it into that.

Black Panther was by, for, and about Africans and African Americans, portraying them as heroes and heroines, empowered and fully realized. As Tre Johnson put it in his review in Rolling Stone, “We’ve been waiting to see ourselves onscreen, flying through the air and running across buildings and dodging laserblasts from bearded colonialists our entire lives.” And so although I felt deeply and personally connected to the film, I felt and still feel that it is crucial not to distract from this moment.

Others, though, have chosen a different approach. In the past two weeks, this film, which has launched so many thoughtful takes, also launched a few terrible takes which tried to brand Black Panther as some sort of pro-Israel, Zionist film.

First, Michael Dickson, the Executive Director of StandWithUS, tweeted that “Wakanda and Israel have a lot of similarities”:

“#Wakanda and #Israel have a lot of similarities. An ancient tribe, blending ancient tradition and language with the knowledge to build the future. The Panther and the Lion.” Howard Bliss #BlackPanther pic.twitter.com/j0nNmsDqdI

Then, the Jerusalem Post’s Lahav Harkov wrote a paeon to the film in Tablet Magazine, insisting that “Black Panther is the most Zionist movie I’ve seen in a long time.”

Beyond the straightforward appropriation of a celebration of someone else’s euphoric cultural moment, the “Black Panther Is About Zionism” take is at best untenable and at worst, offensive.

Let us set the impact of Zionism on Palestinians aside for just a moment and focus on Africa. Harkov centers her piece on Herzl, the founder of modern Zionism, and the Herzelian imagination, to draw comparison with Black Panther. She argues that the tools of the imagination deployed by the Black Panther story are akin to those deployed by Herzl in pursuit of Zionism.

But a film celebrating African culture and African empowerment could never be seriously associated with Herzl or his vision. Consider the fact that Theodor Herzl had no qualms about the colonization of Africa. In fact, he tried to court Cecil Rhodes, the single individual most synonymous with the colonization of Africa, to get his blessing for Zionism. In a 1902 letter, Herzl wrote to Rhodes asking for support in the Zionist endeavor. “It doesn’t involve Africa, but a piece of Asia Minor, not Englishmen, but Jews,” he wrote. Herzl was convinced that Rhodes, given his passion for colonizing Africa, would naturally be interested. “Had this been on your path, you would have done it yourself by now,” he writes of the project aimed at Palestine, adjacent to the African continent. And what makes Herzl so sure Rhodes would be interested in Zionism? “Because,” Herzl writes, “it is something colonial.”

Furthermore, unlike the fantasy deployed in Black Panther of an uncolonized Wakanda, Herzl supported the idea of colonizing part of modern day Kenya as an interim Jewish state. This was known as the Uganda scheme, which proposed bringing Jews to colonize that little corner of Africa.

One also wonders what the Xhosa speaking characters from Wakanda would have thought of Israel’s support of the Apartheid regime in South Africa, like when it offered to sell the South African government nuclear weapons. And of course there is Israel’s modern day treatment of African refugees, 35,000 of whom are facing deportation because, as Israeli Prime Minister Benjamin Netanyahu put it, they present a threat to the “social fabric of society, our national security and our national identity,” and even Israel’s very “existence as a Jewish and democratic state.”

None of these historical facts deterred Harkov from making her case. She draws a comparison between Black Panther and Herzl’s novel Altneuland. The story, Harkov writes, is about a Jewish man in Vienna who travels to Jaffa, “which is a poor backwater.”

Indeed, Herzl describes a place in which “poor Turks, dirty Arabs, timid Jews lounged about-indolent, beggarly, hopeless,” while “a peculiar, tomblike odor of mold caught one’s breath.” He also described “the inhabitants of the blackish Arab villages” who “looked like brigands” while “naked children played in the dirty alleys.”

The heroes of the novel, disappointed, remark that “much could be done” if the Jews were to come, bringing water and shade.

This depiction of Palestine is a creation of a Zionist imagination, a literary device aimed at justifying the cause of the saviors. In fact, this kind of projection is common in writings about Africa as well. As Jelani Cobb writes in the New Yorker in his stellar commentary on Black Panther, “Africa — or, rather, ‘Africa’ — is a creation of a white world and the literary, academic, cinematic, and political mechanisms that it used to give mythology the credibility of truth.” But it is precisely this kind of white imagination imposing a fantasy of an impoverished Africa or Palestine in need of saving that Black Panther so elegantly disrupts. Rather than recapitulating Herzl’s scene, Black Panther’s triumph is in its reversal of the myth of the white savior.

Most crucially, one of the central messages from Black Panther is that the outcome of the dialectical battle between the diasporic Killmonger and the Wakandan T’challa makes clear that that liberation must not come via catastrophic injustice to others.

The way in which Palestinians existed in the Zionist imagination as Herzl wrote about it, and the outcome of that vision — the continued oppression of Palestinians at the hands of Israel today — could not be more different from the imagined world that gave us Black Panther.

Watching the film and seeing its success was particularly meaningful for me, for many reasons. If you come from an Arab or Muslim background and consume media and popular culture in the United States, the representations you see of people like you and the places you are from are horrid, inaccurate and riddled with stereotypes.

As in Herzl’s novel, we are historically and routinely depicted by the West as lowly, ugly, angry, violent, poor, uneducated burdens on the rest of the world, which forces overwhelmingly white westerners to either save us from our own pathetic selves or eliminate us using violence, the only method we beastly people seem to understand.

We are, of course, not the only minorities to experience such portrayals. So to watch a movie that was about an African story directed, written, acted and designed by Africans and African-Americans, that powerfully and unapologetically celebrated its narrative, was a triumph felt deep in this Palestinian’s soul. I know many others felt the same way.

But I say this from the sidelines. It is a narrative of black empowerment, and I would never dream of trying to appropriate it. Others would be wise to do the same.

Yousef Munayyer is the Executive Director of the US Campaign for Palestinian Rights.