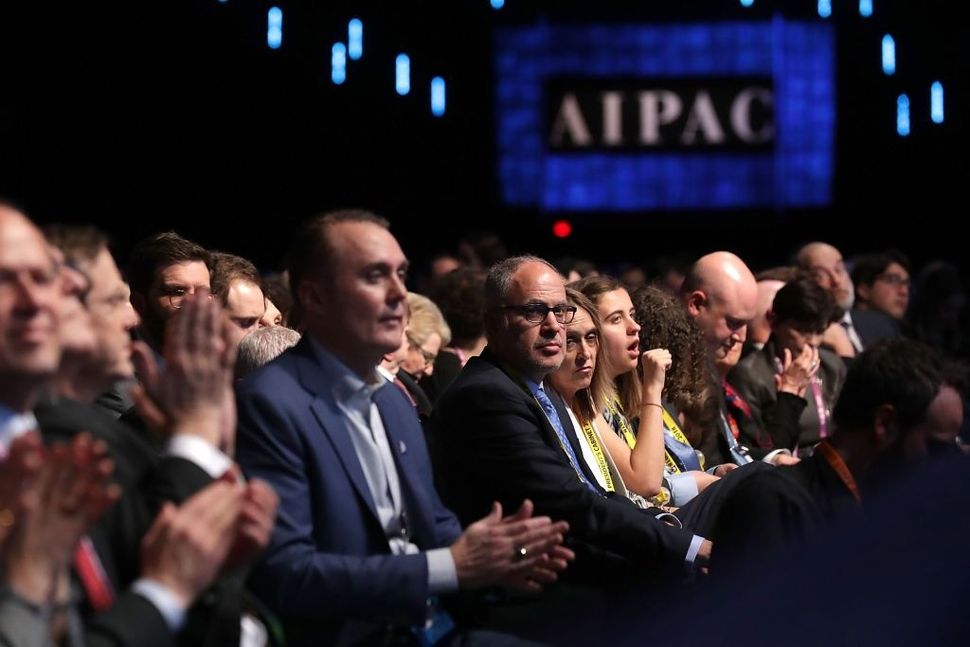 WASHINGTON, DC - MARCH 05: Attendees listen to U.S. Vice President Mike Pence as he address the American Israel Public Affairs Committee’s annual policy conference at the Washington Convention Center March 5, 2018 in Washington, DC. With thousands of delegates and attendees, the annual AIPAC conference is the the largest gathering of the pro-Israel movement in the United States. Image by Getty Images

In late February, the Jewish Agency joined a long list of groups opposed to Israel’s deportation of African asylum-seekers. Its board urged that Israel should grant legal status to 500 young people who had grown up in Israel and asked Jerusalem to ensure that “every migrant has an opportunity to apply for asylum and receive transparent due process in the examination of their application.”

Several days later, AIPAC’s policy conference opened in Washington. Absent from the gathering’s agenda was an attempt to constructively address the growing controversy over Israel’s announcement in February that it seeks to deport more than 20,000 asylum-seekers. This was a missed opportunity for pro-Israel voices to work with Jerusalem to help come up with humane plan that would satisfy the desires of the asylum-seekers, Israel’s current government and Diaspora critics who abhor the deportations.

An estimated 60,000 African refugees and migrants arrived in Israel via the Sinai Peninsula prior to the construction of a fence along Israel’s southern border in 2012. At one point the arrivals reached almost 2,000 a month. That would be the equivalent to around 80,000 undocumented migrants arriving a month in the United States. Israeli governments have not offered asylum to the petitioners and a survey by the Israel Democracy Institute in 2012 found that a majority of Israelis oppose the refugees. According to a UNHCR press release in November 2017, out of 27,500 Eritreans and 7,800 Sudanese, Israel granted refugee status to only eight Eritreans and two Sudanese since 2009. Two hundred Sudanese from Darfur were granted “humanitarian” status. Instead of compassion, the government sought to entice the refugees to leave, giving them financial incentives to move to third countries, usually in Africa. In February of this year, around 20,000 of the migrants received notices to leave within 60 days or face jail.

Voices in Israel and the Diaspora have expressed passionate opposition to the current policy. Legal experts, doctors, authors, 800 US rabbis, the UNHCR, 35 former Israeli diplomats, human rights organizations, Holocaust survivors, 470 Israeli professors, pilots, U.S. donors and members of the Congressional Black Caucus have all sent letters, signed petitions and even offered to hide the asylum-seekers. Israeli authorities have generally ignored the chorus, viewing them as leftist critics. Prime Minister Benjamin Netanyahu is busy dealing with corruption investigations and authorities in Jerusalem are more concerned over Iran than dealing with asylum-seekers.

AIPAC’s 18,000-strong gathering and the networking and meetings that take place on the sidelines represented an opportunity to have constructive discussions between Israel and sympathetic Diaspora voices. Many of the refugees who came to Israel didn’t set off from Eritrea or Sudan to get to the Jewish state, they were fleeing brutalities at home. Many of them ended up in other western countries. Thousands were kidnapped, tortured for ransom by Bedouin human traffickers and left in Sinai, crossing to Israel out of desperation. Quietly since 2016 almost 2,000 Eritrean of these refugees were resettled in Canada from Israel, according to Immigration, Refugees and Citizenship Canada (IRCC). There are 1,845 more African asylum-seekers in Israel still in the process of re-settlement to Canada.

So Canada and Israel quietly created a successful program that served everyone’s interests. The asylum-seekers agreed to move to a successful Western country and start new lives under better conditions than they have in Israel. Israel’s government got what it wanted, and the Canada took in new citizens as part of its progressive policy. So why hasn’t Israel leveraged successful programs like this through the Diaspora, working with those in the U.S. who support Israel, to help foster more creative policies?

The voices critical of the deportations rarely offer a solution either. But those gathered at AIPAC have the resources and influence to offer support to Israel in this regard. That doesn’t necessarily mean re-settling all of Israel’s African migrants abroad. Groups like HIAS, which was originally founded in 1881 to help Jews fleeing pogroms and describes itself as one of nine “primarily faith-based organizations partnering with the US federal government to help refugees start their lives in safety in America.” Outside of Israel Eritreans receive asylum 84% of the time, so why not set up a fund to offer Eritreans in Israel the opportunity to apply for asylum in other countries of their choosing? Asylum-seekers Israel deported to third countries in Africa have made the dangerous journey to Europe with several ending up in Germany. With the support of the US Jewish community, Israel could help them move directly to the US or EU states that would accept them and circumvent such desperate journeys.

Everyone boasts about “start-up nation” and an Iron Dome was even on display at AIPAC. We talk about Israel’s “entrepreneurial ability,” but when it comes to asylum-seekers, Israel and its supporters are too often ossified, defensive, cynical and unoriginal. Similarly, the critics should temper their condemnations of Israel’s deportations with constructive ideas. Partner with the pro-Israel groups, pool the resources and support asylum-seekers in Israel, to provide them opportunities, or to give them realistic choices of re-settlement in countries they want to go to.