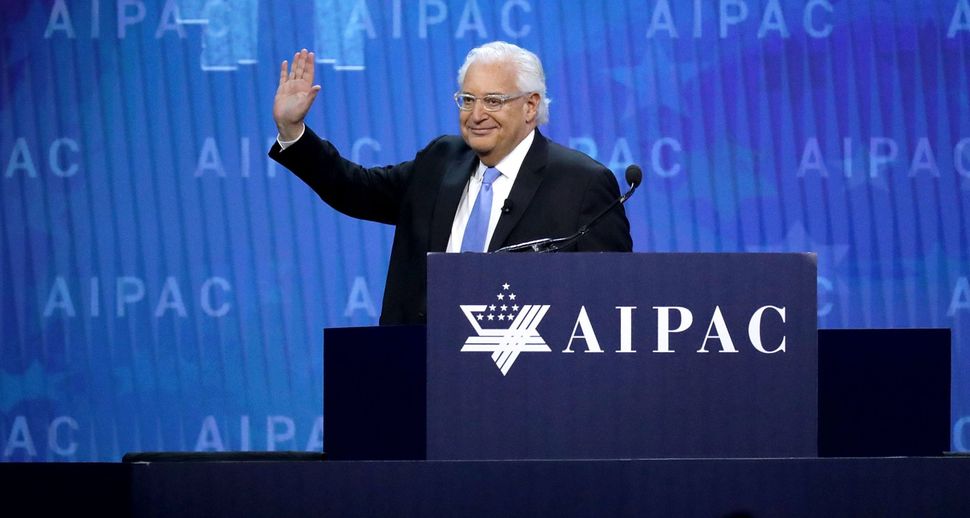 It seems those of us defining ourselves as “pro-Israel, pro-peace” have gotten under the skin of America’s Ambassador to Israel David Friedman.

At AIPAC’s annual policy conference this week, he called those who define ourselves this way “blasphemous.” (I suppose that’s better than what he called us during the presidential campaign in 2016.)

According to Friedman, there’s only one way to be pro-Israel: offering unquestioning support for the policy of the government of Israel.

In reality, of course, there’s far more to the ambassador’s definition of pro-Israel than that.

For Friedman, first and foremost, being pro-Israel means providing financial, political and moral support for the settlement movement’s creeping annexation of the territory Israel occupied in 1967. Never mind that even Howard Kohr, AIPAC’s CEO, made the case to AIPAC conference attendees this week that Israel’s security depends on there being – one day – a Palestinian state on that same land.

It means believing that what’s happening on the West Bank isn’t an occupation and urging the State Department to stop using the terms “occupation” and “Israeli-occupied territories.”

It means refusing to recognize any distinction between the settlements and the state of Israel within the Green Line — which operates under an entirely different civil legal system. It means making the case that the settlers are never, ever moving.

Well, I’ve got bad news for David Friedman. If that is the only way to be pro-Israel without being blasphemous, then Israel must prepare to lose far more than just the support it’s already bleeding among progressives and young people.

Fortunately, many of us who are longstanding friends of Israel and care deeply about its people know that there’s a much different, better way to support Israel and advocate for its future.

At the center of our approach is the belief that Israel’s security and survival – as well as its Jewish and democratic character – depend on a peaceful two-state resolution to its conflict with the Palestinian people and an end to the 50-year occupation.

We will not stand, for instance, with the Ministers in Israel’s government who rallied across the street from the AIPAC conference this week, arguing that the best way to defend Israel against de-legitimization is to support the settlements of Judea and Samaria.

This vigorous celebration of the settlement movement is not a good way to prevent Israel’s de-legitimization. It’s the best way to ensure it.

We won’t stand and applaud a simplistic black-and-white presentation of the complex reality that is the Middle East. We won’t stand for the demonization of all those on the other side of the conflict, and we won’t accept the simplistic assignment of full blame to the Palestinians and Arabs for the lack of peace.

Friedman can repeat as often as he likes that simply to be pro-Israel is to be pro-peace. But the true measure of support for peace must be actions, not words. For decades, Friedman and his allies on the political right have acted at every turn to expand settlements, entrench the occupation and oppose negotiations to reach a two-state agreement.

The entire international community – from the Arab League to the PLO, the Europeans to the Chinese and Russians – has agreed, with rare unanimity, that the only path to peace is through two states for two peoples. Today, the only two major world leaders who refuse to publicly endorse that path are the Prime Minister of Israel and the President of the United States. To blindly support them and their policies is not a pro-peace position.

If Ambassador Friedman and his allies want to defend settlements, demonize Palestinians, oppose the two state-solution and still claim to support peace, that’s their right. But the pro-Israel, pro-peace movement will in turn exercise our right to fight their agenda and their policies.

Based on Friedman’s outraged comments, it’s clear that advocates of Greater Israel are worried about the growing strength of pro-Israel, pro-peace Americans pushing back on their dangerous agenda.

More and more pro-Israel Americans recognize that the settlement movement and its allies are leading Israel down a path to a one-state nightmare of permanent occupation and violence, not peace.

If that’s the definition of pro-Israel that David Friedman insists we adopt, we proudly claim the pro-Israel, pro-peace mantle instead.