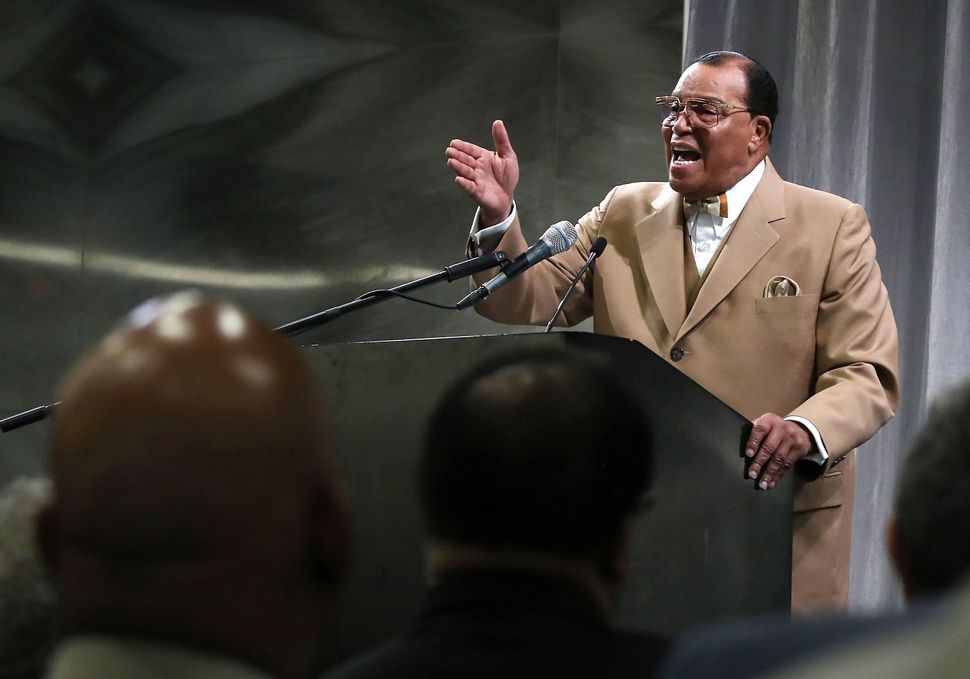 A recent controversy involving anti-Semitic firebrand Louis Farrakhan and leaders of the Women’s March has revealed a perplexing division. Last week, Women’s March organizer Tamika Mallory came under fire for attending an event led by Nation of Islam’s Louis Farrakhan and later posing for a photo with him. In true fashion, Farrakhan made several anti-Semitic statements during the speech, which Mallory did not repudiate.

When she came under fire for her associations, she wrote a rather problematic tweet, which didn’t help her case:

Whether or not Mallory fully understands how invoking the “enemies of Jesus” can be perceived as anti-Semitic is unclear. What is clear is that it only further cemented in some people’s minds the idea that her collaboration with the notorious anti-Semite was far from a mere oversight.

There was a muted but persistent outcry about Mallory’s valorization of Farrakhan. Many called on the Women’s March to repudiate him. On Tuesday, the Women’s March finally released a statement denouncing Farrakhan’s past statements and several forms of bigotry but without addressing Mallory’s association with the Nation of Islam leader. “Our external silence has been because we are holding these conversations and trying to intentionally break the cycles that put out communities against each other,” they wrote.

It was far from adequate.

Louis Farrakhan is more than just a bigot, a homophobe, a misogynist or an anti-Semite. Explaining who he is in these terms reduces the true nature of his evil. He is an exploiter. He exploits the economic depression, resentment and anger of blacks to leverage his own power and status. He uses the language of liberation and the language of demagoguery in tandem. He is a poverty pimp. No civilized discourse or progress can move forward with him, or anybody who associates with him.

Deepening the controversy was the unambiguous support or non-reaction from many Women’s March collaborators, including Linda Sarsour. She doubled down on her support of Mallory, completely dismissing the complaints of detractors.

In which @lsarsour says “anti-semitism will always be indefensible” unless “I wasn’t there.” pic.twitter.com/o2I3PK7Nag

Even Jewish advocacy groups such as Jewish Voice For Peace and Jews For Racial And Economic Justice, who both recently collaborated with Sarsour on a forum on anti-Semitism, failed to respond.

This failure reflects a more general blindness to anti-Semtism on the left. Indeed, a backlash to the backlash ensued, focused on Farrakhan’s lack of power (as opposed to say, the anti-Semites who marched in Charlottesville, Virginia).

But Farrakhan’s bigotry is not powerless. Black anti-Semitism is a real thing, something the Jewish community in Crown Heights has been subjected to on a daily basis for decades.

Even as a black Jew, I myself have not been immune to harassment on the streets. I’m one of the lucky ones. I’m a man, and a large one at that. There have been muggings, stabbings, sexual assaults, break ins and murders. I know two people who have suffered permanent long lasting brain injuries as a result of these attacks.

I cannot draw a direct connection between Farrakhan’s rhetoric and any of these incidents, but there has been a similar non-reaction from sectors who have taken upon themselves the mantle of fighting anti-Semtism.

There were no marches of solidarity four years ago when a man walked into the basement of the Chabad-Lubavitch headquarters and stabbed a rabbinical student in the head. Nobody changed their facebook profile picture in response. We were on our own; as always.

We can talk about the legacy of racism and how that affects anti-Semitism. But what that doesn’t change is that cynical goons like Farrakhan have exploited that legacy and increased the divisions for their own agenda — and we feel it.

So, when I hear leftists talk about anti-Semitic incidents only in the context of white supremacy and Trump, I get a bit frustrated.

JFREJ claims to be the fighters of anti-Semitism. But they only condemn anti-Semitism that fits into a narrow window that they have approved, no matter how much it comes in conflict with other people’s lived experiences. One has to wonder if JFREJ is fighting anti-Semitism, or just white supremacy?

I don’t even think that Tamika D. Mallory is anti-Semitic. But I have seen person after person condemn the alt-right associations of prominent politicians and the Trump administration and remain silent about Farrakhan anti-Semitism or any other anti-Semitism emanating from the left.

Their silence sends a message. It’s a message that reaffirms what many have suspected all along: The left doesn’t care about Jews and anti-Semitism. They care about their enemies and allyship is only important to them when it is convenient.

Any leftists who fails to condemn Farrahkan and others who traffic in anti-Semitism is no comrade of mine.