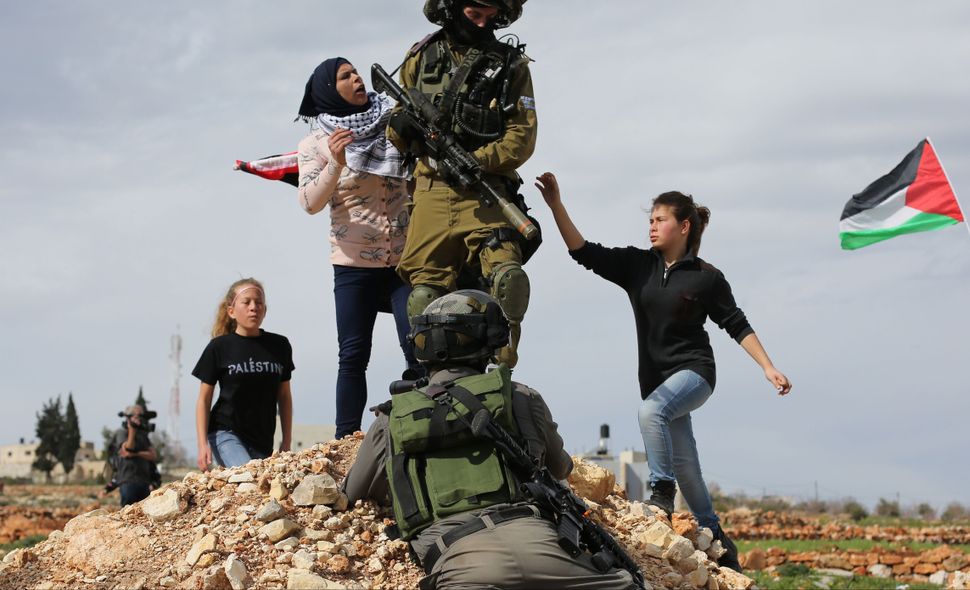 Many years ago, I spoke at a Reform synagogue in Chicago about the Palestinian experience. It was the height of the Second Intifada, and during the Question and Answer session, a woman asked me with a concerned look, “Why don’t Palestinian mothers love their children?”

Confused, I was sure I had misheard the question.

She repeated herself adding, “If Palestinian mothers loved their children, why would they send them out to confront soldiers?”

As others nodded in agreement with her, I replied (somewhat incredulously), “Of course Palestinian mothers love their children; they’re human beings.”

That I had to state such an obvious fact to a skeptical audience shook me to my core.

That exchange came back to me as I think about Ahed Tamimi going to trial this week for slapping an Israeli soldier who tried to enter her West Bank home.

While the world is focused on Ahed, I have been thinking about her mother, Nariman Tamimi, whose trial also starts this week. Israel has charged Nariman with “assault” and “incitement on social media” for filming — some say directing — Ahed’s confrontation with the soldier.

These charges not only reinforce false stereotypes about Palestinian mothers as lacking in maternal love, but they also demonize Palestinians and perpetuate the conflict.

This demonizing of Palestinian mothers has a long history. For the past half century, supporters of Israel have often repeated the quote, widely attributed to Golda Meir, that “peace will come when the Arabs love their children more than they hate us.” Rather than reflect the humanistic values frequently ascribed to it, this quote does the opposite. It denies Palestinians’ love for their children and dismisses their legitimate struggle for freedom.

That denial has grown into larger stereotypes about Palestinian mothers, as reflected in the question I was asked at the synagogue. When I drove home that evening, I remembered the many loving Palestinian mothers I knew, and how they always welcomed me into their homes with broad smiles, sweet words, tight hugs and huge piles of food. I thought about my own mother’s boundless love, about how she worries about me and my siblings, anxious to protect us from harm.

For Palestinian mothers living under occupation, harm is unavoidable. Harm comes when they’re detained at checkpoints, when their homes are raided in the middle of the night, and when soldiers shoot tear gas canisters, and sometimes live bullets, into crowded areas. It’s easier to resort to well-worn stereotypes about Palestinian mothers’ supposed callousness than try to understand the conditions under which they live.

We’re seeing this dynamic today with Nariman. A 42-year-old mother of four from the West Bank village of Nabi Saleh, she has spent her entire life under occupation. She has also seen the nearby Halamish settlement encroach more and more on her family’s and neighbors’ lands. When Halamish settlers seized the village’s spring in 2009, denying Nabi Saleh’s residents access to their main water supply, residents started holding weekly unarmed protests to raise international awareness and regain access to their water.

Nariman has served as a medic as well as a citizen journalist there, documenting Israeli human rights violations.

In response, Israel has routinely used excessive force to try to quell the protests. In 2012 Nariman witnessed IDF soldiers shoot her brother Rushdie in the back, then prevent others from coming to his aid, leading to his death. (An IDF probe later concluded that the bullets that killed Rushdie were fired “without justification.”)

In 2014, Nariman herself was shot in the leg with live ammunition, an incident witnessed by Ahed. Nariman has also been arrested numerous times as she continues to document the protests and the Israeli reaction to them.

Some say the Tamimis deserve what they get. What else do they expect, the thinking goes, when they confront Israeli soldiers? But Palestinians do not seek out confrontations with soldiers. The violence comes to them. Nariman has stressed that she would rather keep her children out of harm’s way, but the collective punishment meted by the IDF leaves her little choice. Nighttime military raids, typically launched between 1 a.m. and 3 a.m., are especially traumatizing. Since Nariman and other mothers cannot protect their children from Israeli violence, they strive instead to empower their children to process the trauma that routinely confronts them.

Nariman’s warmth and generosity of spirit are well-known to people who visit Nabi Saleh. She speaks of “loving your enemy” and cultivating an inner peace. But she also fights fiercely to try to protect her children, as happened in 2015 when she pulled back an Israeli soldier who had her twelve-year-old son in a chokehold.

As I raise my children in the relative comfort and safety of America, I wonder what it would be like if I had to raise them under occupation. What would I teach them, knowing I couldn’t protect them from the daily aggressions of soldiers and settlers?

What about you? If you had to raise your children under the same conditions that Nariman is raising hers, what would you do? How would you teach them to react to foreign soldiers who invade your homes and shoot your relatives? These are uncomfortable questions, but we need to grapple with them if we are going to foster the kind of empathy that is needed for true peace to take hold.

Only then will we see a resolution to the conflict.

Maha Nassar is an Assistant Professor at the School of Middle Eastern and North African Studies at the University of Arizona and the author of “Brothers Apart: Palestinian Citizens of Israel and the Arab World.” She is a Public Voices Fellow with the Op-Ed Project.