Detaining Immigrants Indefinitely Is Un-American. Shame On The Supreme Court. 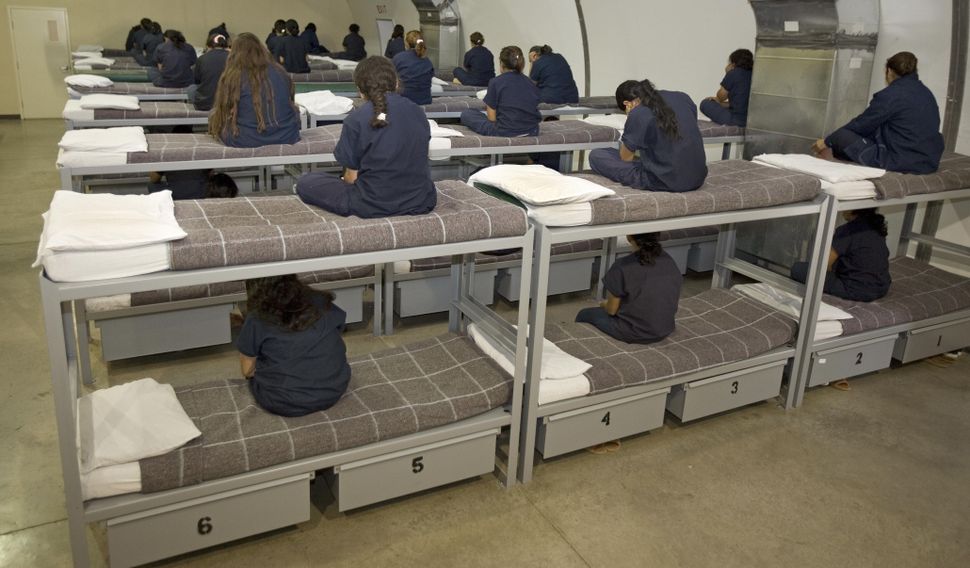 I first met Alexander Lora on a chilly day in December of 2013. A 31-year-old permanent resident born in the Dominican Republic and a New York resident since age seven, he was wearing a bright orange jumpsuit and seated uncomfortably on a hard plastic chair with his hands shackled to a heavy metal chain around his waist. I was a public defender with the Brooklyn Defender Services assigned to his case.

He stared at me blankly. “I can’t take it anymore; I’m signing out,” he finally said.

What he meant was that he wanted to “voluntarily” agree to his own deportation from the country he had called home for 24 years, despite his family residing in New York. His despondency was a direct reflection of his arrest and imprisonment by Immigration and Customs Enforcement.

For the previous month, he had been caged in a large cold room full of bunkbeds with 63 other men in a local jail that had rented space to ICE. He described late nights where he couldn’t sleep, surrounded by strangers, men often sobbing or screaming loudly, fearing separation from their families or concerned about returning to nations they had fled after enduring horrific violence.

This was the first time he had ever been confined in his life and he was breaking down.

Despite being a lawful permanent resident, Mr. Lora had been detained without the possibility of release due to a prior non-violent drug offense for which he had served probation. Overbroad laws essentially allowed for months or years of detention by prohibiting immigration judges from granting release for certain groups of immigrants, including some asylum seekers and some green card holders like Mr. Lora.

His detention was absolutely devastating for his family; a few weeks after I began representing him we received the news that his one-and-a-half-year-old U.S. citizen son was placed into foster care. The health of Mr. Lora’s elderly mother, also a U.S. citizen, was deteriorating as she faced complications related to the stress of his detention.

It was all this that led to his hopelessness. But then he changed his mind, and decided to fight his immigration case rather than accept deportation, largely driven by his desire to remain with his family. In 2014, we challenged Mr. Lora’s mandatory imprisonment before a federal judge.

And we won that case. Mr. Lora was given the opportunity to present his application for release to an immigration judge, and was subsequently released on bond.

Crucially, as a result of his bond hearing, Mr. Lora was permitted to remain free while he fought his case. With his liberty, Mr. Lora regained sole legal and physical custody of his son, found a great job, has married, and is now expecting another child with his wife. Ultimately, my students in the CUNY Law School’s Immigrant and Non-Citizens’ Rights Clinic and I persuaded a judge to grant Mr. Lora the right to keep his green card and remain in the United States.

But after we initially won his freedom in 2014, the government appealed the federal judge’s finding that his detention was unlawful. We at Brooklyn Defender Services, together with the NYU Law School’s Immigrant Rights Clinic, argued the appeal, which ultimately led to the landmark decision Lora v. Shanahan.

That case resulted in the successful release of hundreds of immigrants in New York and Connecticut who had been detained without bond. Thanks to this ruling, beginning in October 2015, immigrants detained under the same immigration law as Mr. Lora automatically received bond hearings once their detention had neared six months.

The decision clearly disregards the personal liberty of immigrants fighting deportation. Worse, it flies in the face of foundational aspects of our democracy by permitting arbitrary and prolonged pre-trial detention.

Last week, the Supreme Court vacated the Lora decision in light of Jennings, reversing the gains achieved in Lora v. Shanahan. Overnight, immigrants who were eligible for bond hearings no longer have the right to be granted this chance at freedom.

As an immediate result of this decision, we will likely see a vast increase of immigrants languishing in jails throughout the country, especially given the Trump Administration’s commitment to arresting and detaining immigrants. Thousands of people like Alexander Lora will spend months or years locked up as they wait for the backlogged immigration court to decide their claims.

The likelihood of winning a case while detained is drastically lower than if someone is not detained. The ability to collect evidence, gather witnesses, and present meaningful arguments is greatly reduced by the practical and psychological impacts of confinement, often far from home and with limited access to loved ones. Over the years, many of my detained clients have decided to accept deportation rather than remain incarcerated.

Just like Mr. Lora had when I first met him.

I often think of that gray December day over four years ago where he nearly lost the will to fight for his life here.

Thankfully, his nightmare is over. But, under the Supreme Court’s latest ruling, Mr. Lora’s life and the life of his family would have been starkly different and I wonder how many future Alexander Loras will be deported as a result? How many families will be torn apart?

Mr. Lora’s victory was possible for several reasons. First, he was able to mount a successful challenge to his deportation because he received free counsel through NYIFUP, which grew out of a study that found that legal representation was the single most important factor driving outcomes for immigrants facing deportation.

Before the creation of NYIFUP only 3% of detained immigrants in New York won their cases. It is now estimated that 48% of cases will end successfully. Recognizing the significance of representation, the New York City Council has since funded the project and detained indigent New Yorkers receive an attorney. If we want fair proceedings consistent with due process, we must convince all local municipalities and states to fund and continue funding programs that defend immigrants facing deportation.

Second, Mr. Lora was released while fighting his deportation case. Indefinite detention without due process must never become the rule of law in the United States. We must call upon Congress to change these laws that have been interpreted to permit detention of immigrants for years on end. Many people, like Mr. Lora, won their claims after they were released. Why are we as tax payers spending resources to detain people in jails without limit and without the right to seek release who ultimately end up winning the right to stay here?

Lastly, indefinitely detaining immigrants is not only a legal or economic concern; it is also an ethical one that requires all of us to act to protect immigrants in an increasingly hostile executive rhetoric.

Whether you are a first, second or seventh generation immigrant or do not descend from immigrants, it is time to build a movement to protect the rights of all immigrants, drawing from Supreme Court Justice Breyer’s impassioned Jennings dissent, read aloud from the bench: “No one can claim, nor since the time of slavery, has anyone to my knowledge successfully claimed, that persons held within the United States are totally without constitutional protection.”

We should work together so that Mr. Lora’s outcome is not the exception, but the rule.

Talia Peleg is a Visiting Clinical Law Professor in the City University School of Law’s Immigrant and Non-Citizen Rights Clinic; she formerly represented immigrants in deportation proceedings and other immigration matters as a Supervising Attorney at Brooklyn Defender Services.

Detaining Immigrants Indefinitely Is Un-American. Shame On The Supreme Court.