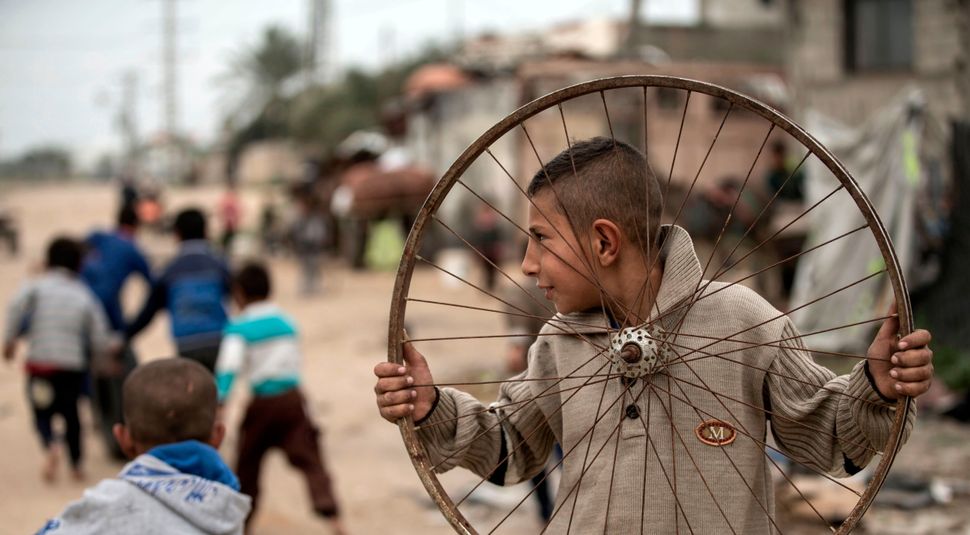 On March 13, Jared Kushner and Jason D. Greenblatt held a White House summit on the humanitarian crisis in Gaza with leaders from Israel, several Arab nations and Western countries — but there were no leaders from either the Palestinian Authority or Gaza in attendance.

“We all know that none of this will be easy,” Greenblatt reminded those gathered at the summit. “Everything we do must be done in a way that ensures we do not put the security of Israelis and Egyptians at risk — and that we do not inadvertently empower Hamas, which bears responsibility for Gaza’s suffering. But the situation today in Gaza is unacceptable, and spiraling downwards.”

Most crucially, Israel must begin to distinguish militants from civilians.

Up until now, none of these imperatives is being followed. In a recent statement to his party Yisrael Beiteinu, Israeli Defense Minister Avigdor Lieberman claimed that, “The economic state [in Gaza] is complicated and must be dealt with, but there’s no humanitarian crisis.”

Contradicting his country’s own Army Chief, Lieberman suggested that rather than being close to collapse, the scope of Gaza’s distress is exaggerated by Hamas in an effort to force the Palestinian Authority to send more economic aid to Gaza.

Regardless of whether or not Hamas wants to pressure the PA into giving aid, does that negate the fact that Gaza is essentially a failed state? Lieberman’s open legitimization of continuing to collectively punishing two million Gazan civilians for the sake of pressuring Hamas is criminal. Neither Israel nor Hamas should blame Gaza’s civilians for the current catastrophic situation in the Strip.

That said, Lieberman is not totally wrong. Several friends of mine who work at Gaza’s central hospital, Al-Shifa, have told me that whenever a foreign delegation plans a visit, the Hamas administration redecorates the hospital to exhibit more despair and misery than the day to day tragic existence. They empty the warehouses of basic medicines; they feature heartbreaking stories about not having enough rooms or electricity to keep the patients alive; they even recently filled the hospital corridors with trash bags and blood for a photo shoot before the Qatari ambassador’s visit. That’s how they generate immediate support, or so they think. But you don’t need to stage elaborate performances to prove that the situation for Gaza’s sick residents is often tragic. My own grandfather recently died because, like thousands of others, his case couldn’t be treated in Gaza and he was denied an Israeli permit to seek medical treatment abroad. My father died for exactly the same reason, and so have thousands of others, producing a generation of orphans whose main oppressor is the blockade, the cage, the concrete walls that Gazans aren’t allowed to step a foot beyond.

And all of these millions of people are put into the same basket as Hamas militants, dehumanized into mere tools for the demilitarization of Gaza. Similarly, when the Qatari ambassador visits Gaza, the news headlines declare that “Gaza runs out of diesel today” and the power plant is always shut down upon his arrival in order to “empty the man’s pockets” before he leaves.

But that doesn’t undermine the unbearable pattern of life in Gaza, where four to eight hours of electricity per day is a best-case scenario, and freezing in the winter cold or suffocating in the summer heat are not uncommon causes of death.

When the Qatari ambassador leaves, the water in Gaza is still undrinkable.

My 12-year-old sister walks 2 kilometers every other morning to fill up a water jug that weighs half of what she does from a groundwater well provided by The United Nations Relief and Works Agency. UNRWA, like oxygen in a mechanical ventilation system, keeps the Gazan population alive — and yet faces the possibility of being defunded.

Hamas’s “deliberate exaggeration” of the “scope of Gaza’s distress” doesn’t devalue the unspeakable suffering that its hopeless population endures. It doesn’t devalue the fact that “doodle bugs,” armed-drones, obliterate the sun and strike fear and terror into our hearts with their insufferable buzzing. It does not negate the airstrikes and artillery fire that light up the evening skies amid blinding darkness, nor the navy gunboats hunting down fishermen trying desperately to make ends meet in an area where fish are virtually non-existent.

Most of my friends in Gaza are spiritlessly swarming to the border barechested each Friday in absolute despair, believing that their deaths or injury may be more helpful to their families than their continued painful existence.

Strangling the economy, stripping it naked to a skeleton, watching silently as the private sector dies, and allowing the health and education sectors to fail one after the other like domino bricks will never bring peace or tranquility. Rather, it will mobilize more hate, more rage and more anger against the status quo. My 10-year-old youngest brother tells me how more and more students in his class are dropping out of school to wander the streets begging for few shekels. I learned from Gaza’s general attorney that there are about 100,000 lawsuits in Gaza’s courts of unserviced debts and financial disputes. Hundreds of businessmen are in prison for bankruptcy. Shops are closing one after the other and almost every man I know in Gaza between the ages of 20 and 30 is an unemployable burden on his family.

Whether you call it a crisis or call it a passing distress, names are irrelevant when you try to describe the impossibility of life in Gaza that no man could endure yet no man can escape.

Israel’s view of Gaza as an outpost of terror is exactly what pushes more people into joining militarist militias. When thousands of engineers cannot afford a decent life, it pushes desperate men to dig more tunnels. When Gaza’s slow death is passing unheard and unnoticed, it drives more people to launch primitive improvised projectiles. Continued suffering with no hope on the horizon mobilizes an army of futureless young people who will find an answer to their pain in crossing the separation fence and flooding Israel with a human deluge of migrants seeking a better life.

Rather than dealing with the symptoms of Gaza’s extreme dilemma, one must drain the swamp of despair. Israel must differentiate between who is a civilian and who is a militant in Gaza. Israel must treat the innocents with the minimum dignity they deserve, allow them to cross into and out of Gaza freely, let them work again in Israel and help them make a living.

Hamas personnel themselves would be likely to retire and rejoin civilian life. I know many young people who joined Hamas out of desperation because civilian life in Gaza is unbearable.

It is universally agreed that civilians must never pay the price of political disputes and military conflicts. Targeting, intimidating or blackmailing civilians in the pursuit of political aims is the basic definition of terrorism.

Israel and its supporters must separate the civilians from Hamas militants and stop the collective punishment. Israel must have the guts to confront Hamas, the child of the Israeli occupation, rather than further impoverishing two million Gazans and turning them into fuel for violence, hate and terror.