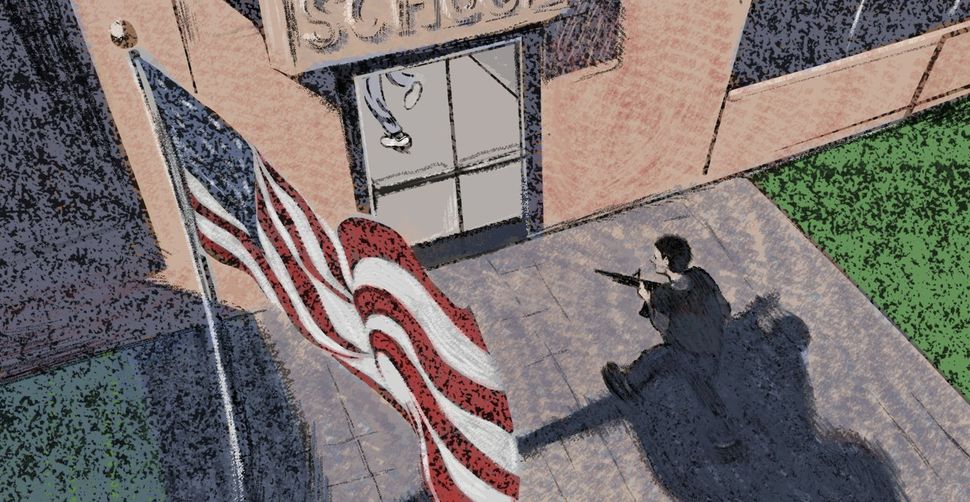 On March 24th, together with my 14 year old daughter and 9 year old son, I will be spending Shabbat differently than we normally do, as participants in the March For Our Lives in Washington, DC. As a doctor, researcher, and a Jew, I believe gun control is mandated, both by statistics and by stories of patients I have known.

Statistics illuminate what makes murder in the US different. It’s not that murder happens more often here. In the most recent figures available, the UN estimates the murder rate in the US at 4.88 per 100,000 people in 2015, 84th in the world, between Kyrgyzstan and Kazakhstan. (The highest rate is in El Salvador, at 108 per 100,000, owing to their criminal gangs. Refugees from that country, by the way, were welcome here before President Trump discontinued El Salvador’s Temporary Protected Status, and will have to make a decision by September, 2019, whether to leave or stay under a cloud of potential deportation.) The country with the least murders? It’s a tie between Andorra, San Marino, Liechtenstein and Monaco, which all recorded no murders in 2015. No word from the Vatican.

Our country is sadly distinguished by the number of crimes connected with firearms. Considering only gun-related deaths, the US is not in first place in general (that dubious distinction belongs to Honduras, also beset by gangs and with loose gun laws), but the frequency of such deaths is higher here than in other rich countries. A particularly tragic statistic: in 2014 (again, the year with the most recent statistics publicly available for this category), there were 6.4 gun-related suicides for every 100,000 inhabitants in the US, second only to Montenegro.

Why are there so many such deaths? It’s simple: we’re flooded with guns. There is a clear relationship between death rates due to guns and how widespread they are — both when comparing countries, and when comparing different states in the US.

Yes, many try to explain the gun deaths with other reasons; unfortunately, they are unconvincing. Is American culture particularly violent? Apparently not, since US crime rates unconnected to guns aren’t much different from in other countries. What about the popularity of video games? They have those in Japan, Canada, and the UK, all rich countries with lower rates of gun deaths.

There’s also a tendency to point to the Second Amendment as an essential component of Americans’ individual rights. Of course, Jews understand the importance of self-defense. No one is so naive to think that a government by majority will always defend the rights of the minority. When a Jew with historical consciousness hears talk of handguns, they might remember the pistols of ghetto fighters or partisans’ smuggled rifles.  Other American minorities, particularly African-Americans, understand that the history of gun control is frequently associated with infringement of their rights. Restricting access to firearms has often been a tool of white supremacy.

Things change, though, and white supremacy has a multiplicity of more effective tools in 2018 (after all, it elected a President). And our situation as American Jews is significantly different: no longer an oppressed minority, we have powerful defenders and are a meaningful political bloc in our own right (in spite of the real and growing threat of anti-Semitism). Furthermore, gun violence is not merely a political possibility, but a concrete cause of death every single day, a danger which we must confront. If Jews were to be threatened by a revolution or God forbid a pogrom, semi-automatics in Walmart wouldn’t save us.

Besides the statistics, there is a heartrending picture that most don’t have the opportunity of seeing. I’m not talking about gun deaths, a horrible tragedy that gets much attention, but the overlooked epidemic of nonfatal gun violence (according to a 2017 estimate in the American Journal of Epidemiology, six of every seven gunshot victims survive). There is more and more gun violence, say the epidemiologists, and more of these victims live to see their everyday existence changed forever. I am not a trauma surgeon or emergency room physician who repairs victims in the first moments after their injury, but a primary care doctor who sees the long term effects: colostomy bags after surgery to remove damaged intestines; urinary catheters for bladders that no longer work; paralysis; chronic pain; and — so often — traumatized psyches, families, and communities. When I march, I will march not just as a parent but as a doctor, for my patients who are forever accompanied by the cold appellation “GSW”: gunshot wound.

But I will march as a Jew as well. There are reasons in the Jewish tradition to support the practical steps that must be taken to reduce gun violence (background checks, purchase restrictions, limitation on magazine sizes and a ban on military-style weapons). Liberal democracy supports state interventions to preserve the public’s health, of course. While democracy is a foreign import from the point of view of Jewish rabbinic texts, even before Jews eagerly accepted democracy in its many flavors, the Rabbis of the Talmud found many opportunities to discuss the responsibility of the individual to society.

The classic example is the pit in the public domain mentioned in the halachot of nezikin (damages). If one leaves such a pit open, and someone falls in, the owner of the pit is liable for at least a part of the associated costs. Yes, everyone is “free” to dig a pit, but you aren’t free of responsibility for it. If you accept the private right to own firearms (though such a private right is not inherent in the 2nd Amendment, and is only a recent finding by the Supreme Court in the last 50 years), you must also accept society’s ability to limit that right.

Both statistics and narratives, Jewish texts and modern notions of liberal democracy provide ample reasons to support gun control, especially in these times when more and more are waking to the nightmare of gun violence. Let us hope that we can act and achieve a practical solution to these tragedies, no matter where we are spending this coming March 24th.

Zackary Sholem Berger is an internal medicine physician in Baltimore and the treasurer of Clinicians for Progressive Care. He is a regular contributor to the Yiddish Forward where this first appeared.