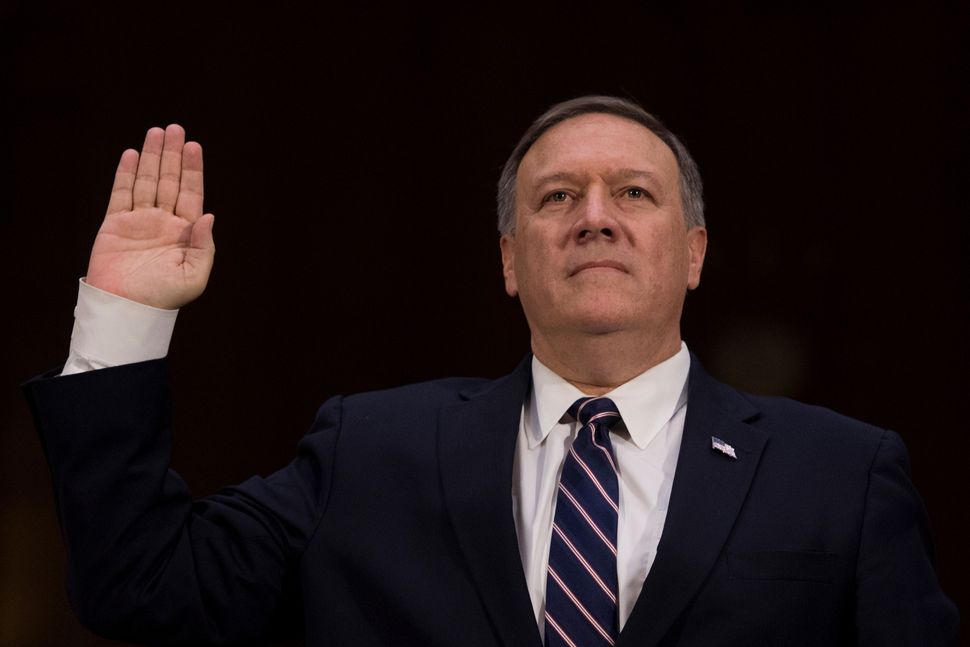 Consistency in public life is often honored in the breach. But when it crosses that thin line into hypocrisy, there ought to be consequences.

We are at that moment with Mike Pompeo, the former congressman and current CIA director who is President Trump’s choice to be the next secretary of state.

And whereas many self-appointed leaders of the Jewish community raised holy hell when a couple of congressmen and one of the leaders of the Women’s March refused to denounce the anti-Semitism of the Rev. Louis Farrakhan, we’ve heard precious little from those same critics about Pompeo’s well-documented anti-Muslim bigotry and his close ties with Islamophobic extremists.

In fact, with two notable exceptions, most of the major Jewish communal leaders who have spoken up since Pompeo’s name surfaced last week from the tumultuous White House have only praised him.

Pompeo “has had close ties to the Jewish community and is a strong supporter of the U.S.-Israel relationship,” Malcolm Hoenlein, executive vice chairman and CEO of the Conference of Presidents of Major American Jewish Organizations, told JNS.

B’nah B’rith International and the Simon Wiesenthal Center also piled on the accolades, as did groups representing Orthodox Jewish voters, thrilled at Pompeo’s unrelenting criticism of the Iran nuclear deal and his proudly hawkish views.

Contrast that with the widespread denunciations of one of four leaders of the Women’s March, Tamika Mallory, who openly declared her support for Farrakhan despite his bigoted views. Or the pressure put on U.S. Rep. Danny Davis, an Illinois Democrat, to condemn Farrakhan’s views. Or the criticism lobbed at J Street’s political action committee for supporting Davis.

Farrakhan’s persistent, vile rhetoric against Jews, women, transgender people, gay men and lesbians ought to be condemned; he deserves no place in polite company. But let’s put him in perspective. He’s a loud-mouthed activist with a huge Twitter following whose last major accomplishment was organizing a march more than 20 years ago. As the leader of the Nation of Islam, he has championed black empowerment, but he holds no public office, commands no public authority, and is only as important beyond his limited sphere of influence as we make him out to be.

Not so Pompeo. If he is confirmed by the Senate and sworn in as the 70th secretary of state, he will be charged with carrying out the president’s foreign policy around the world, with a formidable array of public servants and political appointees reporting to him. The secretary of state is the highest-ranking Cabinet official and is the fourth in line to succeed the president should anything happen to him. (Look up Alexander Haig.)

And yet, as The Washington Post reported, Pompeo has long worried Muslims and human rights activists because of his sweeping, derogatory statements about Islam.

After the Boston Marathon bombings, the Kansas Republican falsely accused Muslim American organizations of not condemning terrorism. He co-sponsored legislation to designate the Muslim Brotherhood a terrorist organization, and has insisted that American Muslims are part of a secret radical Islamist plot.

Most troubling, Pompeo is closely allied with prominent anti-Muslim figures Frank Gaffney and Brigitte Gabriel, conspiracy extremists who argue that Muslims cannot be loyal Americans because their first and only loyalty is to Islam. (Tell that to Khizr Khan.) Gaffney has hosted and honored Pompeo repeatedly through his think tank, the Center for Security Policy. Gabriel founded ACT, the largest anti-Muslim group in the United States today, and, according to the Anti-Defamation League, believes that “every practicing Muslim is a radical Muslim and that any woman wearing a hijab must be an extremist.”

As my colleague Peter Beinart wrote in The Atlantic, “These two allies, Gaffney and Gabriel, are to American Muslims what David Duke and Louis Farrakhan are to American Jews.”

If Farrakhan is to be denounced, then what about Pompeo? If members of Congress are to be criticized for associating years ago with a demagogue, then shouldn’t there be an equal test for the man designated to be the leading diplomat in a world with 1.8 billion Muslims?

So far, Jonathan Greenblatt, ADL’s CEO, is the only one who seems to get it. In a statement emailed to me last night he said: “Mike Pompeo’s own statements and record of close associations with organizations that have frequently expressed hostility to Muslims and have trafficked in anti-Muslim conspiracy theories raise serious concerns about his fitness to serve as secretary of state. We are reviewing the record and statements of Pompeo and will offer questions for the upcoming confirmation hearings, as we have done frequently with key Cabinet nominees, and urge senators to closely examine his record.”

I learned after this column was first published that J Street also has criticized Pompeo for his “disgraceful history of expressing anti-Muslim views,” questioning whether his ideology and rhetoric are suited for a top diplomat.