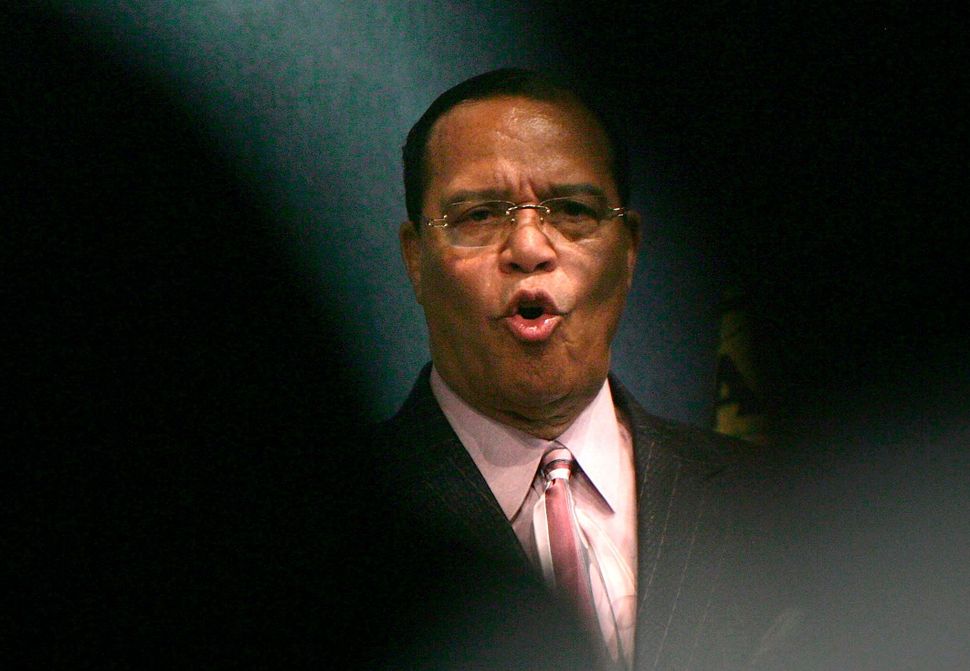 Louis Farrakhan, the leader of the Nation of Islam, asked a telling question on his Twitter page recently.

“What have I done to make the Jewish people hate me?” he wrote. (The next day Farrakhan tweeted that Jews control the FBI.)

What have I done to make Jewish people hate me? pic.twitter.com/2cSiLCmsQY


Farrakhan has perennially found himself denounced across the political spectrum for decades of anti-Semitic statements. This latest tweet came after Farrakhan’s speech at the NOI’s annual Saviour’s Day conference in Chicago, during which he referred to “Satanic Jews” and said that “when you want something in this world, the Jew holds the door [closed].” In that same speech he gave a shout-out to Tamika Mallory, a co-chair of the Women’s March activist group. When the Women’s March leaders declined to denounce Farrakhan or his views, Jewish organizations of all stripes called foul.

But while many white Jews have voiced their outrage at Farrakhan’s staying power, many African-American Jews insist that Farrakhan is simply a political bogeyman.

“This is way overblown and an attempt by right-wingers and conservatives to drive a wedge where there isn’t one,” said Jordan Berg Powers, director of MASS Alliance, a not-for-profit that supports progressive candidates and activism in Massachusetts. “If you asked black people on the street who he is they wouldn’t know. He doesn’t speak for black society.”

Farrakhan’s day as a household name in the 1970s and eighties has passed. Still, he holds political cache, however threadbare, for left-wing political leaders and activists. In January it was reported that Farrakhan attended a meeting of the Congressional Black Caucus in 2005; a photographer who captured Obama standing with the NOI leader said he “swore secrecy” about the image’s existence. In statements to the press, the CBC did not denounce Farrakhan or his anti-Semitic views. (Obama denounced Farrakhan’s “anti-Semitic comments” in 2008.) JStreet’s political endorsement wing, JStreetPAC, announced Wednesday it was reevaluating its support for Illinois Democrat Danny Davis, who called Farrakhan an “outstanding human being” in an interview with the Daily Caller this week.

“The world is so much bigger than Farrakhan and the Jewish question and his position on that and so forth,” Davis said. On Thursday, Davis released a statement condemning Farrakhan’s statements about Jews.

Farrakhan has also been shouted out by a few progressive African American activists. Mallory once called Farrakhan a “GOAT,” or greatest of all time, in an Instagram post. (In a March 7 op-ed, her first since the Saviours’ Day speech, Mallory didn’t mention Farrakhan by name. “My work requires an operational unity that is sometimes extremely painful and uncomfortable,” she wrote.) Oliver Willis, a blogger, wrote on Twitter that “If Farrakhan were white he’d have book signings at CPAC.”

But many African-Americans tuned into the latest Farrakhan controversy have wasted little time in condemning his remarks. Though many disagree on the extent to which this episode is a distraction, most seem to view the decision to denounce Farrakhan as easy and necessary.

It’s simply wrong that Farrakhan’s past or present commentary on Jewish people reflects the views of the Black masses/anyone who speaks favorably of him. Furthermore, you’re also implying that his words are analogous to the abuse Jewish folks face from white anti-Semites

Louis Farrakhan is a disgrace to the black community. I do not claim him and if you refuse to let his bigoted ass go because of his contributions to *some* in the black community, you do not deserve to call yourself an activist and should be ashamed of yourself.


Yolanda Savage-Narva, executive director of Operation Understanding D.C., a not-for-profit that promotes black-Jewish relationship building, said she is always “disturbed” by Farrakhan’s anti-Semitic and homophobic comments. But, she said, he is largely “irrelevant” for African Americans now.

“In places that I travel, and people that I speak to in the black community, Farrakhan doesn’t come up,” she said. “People don’t buy into his philosophy at all.”

Savage-Narva said she thought Farrakhan knows that his reach has shrunk over the decades. In many former NOI strongholds, their black nationalist variant of Islam has given way to a more mainstream practice of the religion.

“He knows that people have moved on,” she said.

Farrakhan’s tirades against Jews have also been seen as putting him in between the Hebrew Israelite community and the larger American Jewish community. In 2000, he called a Black Hebrew leader his “brother” in introducing him at the Million Family March in Washington, D.C. Rabbi Capers Funnye, a major Hebrew Israelite rabbi who also underwent a Conservative Jewish conversion, has said he tries to maintain positive relations with the NOI leader.

“I don’t agree with everything the man says or thinks,” Funnye, who leads a large Hebrew Israelite congregation in Chicago, told the New York Times in 2009. “I’m a Jew, after all. But you need to talk.”

“Farrakhan is an ignorant fraud, which is why I HATE giving him airtime,” tweeted Rebecca Pierce, an activist and freelance documentary journalist. “He claims to present a (much needed) alternative to compulsory christianity in Black communities, but peddles its worst elements: homophobia, misogyny, antisemitism.”

Pierce wrote that even though she despises his anti-Semitic and homophobic statements, in any conversation about Farrakhan she would rather be talking “about Malcolm X.” Farrakhan admited complicity in Malcolm X’s 1965 murder during a May 2000 “60 Minutes” interview. Farrakhan is rarely called out for his role in the killing, one of the most consequential assassinations in American history.

Jordan Berg Powers said that Farrakhan is simply not a talking point for people having a “serious conversation” about black leadership in the U.S.

“If I felt like there was a need to denounce it, it would be easy,” Powers said of Farrakhan’s anti-Semitism. “He’s a fringe lunatic.”

“He’s full of hate,” Powers continued. “Lots of people are full of hate. It’s sad for them.”

Correction, March 11, 2:00 p.m. — A previous version of this article incorrectly referred to Rebecca Pierce as a Hebrew Israelite.