Over the past few days, Facebook has seen a righteous backlash for its promiscuous use of data, hoovering up our phone numbers, our predilections and our loved ones’ birthdays like so many profitable nuggets of ore for their data-mining operation.

But over the past few years, much of the surging and chaotic energy of social media has migrated to Twitter, which encourages us to announce our thoughts to the general public without any expectation of privacy at all.

Through Twitter’s democratizing medium, I have been exposed to perspectives I never dreamed of as a white woman from a background of Modern Orthodox homogeneity: I have chatted with ex-evangelical Christians, trans activists, prison reformers, folks pushing for disability rights and racial justice, sardonic socialists and botanical historians, candidates for Congress and columnists on climate. It’s an exhilarating, if sometimes overwhelming, stew of conversation. (And I’ve learned to mostly evade the neo-Nazis that discover my profile from time to time.)

“Let your home be a meeting place for the wise; dust yourself in the soil of their feet, and drink thirstily of their words,” said the sage Yose ben Yoezer in the first chapter of Pirkei Avot.

In our post-salon, disconnected era, in which the meeting and mingling of minds happens most frequently online, one may be excused for keeping oneself –- and one’s carpet — clean of foot-soil. But the advice to immerse oneself in the sagacity of others may never have been easier: on Twitter, despite the toxicity inherent to some conversations, the thoughts of experts and pundits, politicians and stars and activists and rabbis and ordinary citizens, mingle in an endless, chaotic stream of conversation.

Twitter is a place to share your thoughts, for certain, and my tens of thousands of tweets attest to the fact that I’ve never been shy in that regard (earlier this week, I tweeted, “i just ate most of a head of boiled cabbage so its time to ride the fart rocket to planet sleepytime”). But it’s also a place to listen to voices you can’t hear anywhere else, and that’s even more important.

The essence of an edifying social media feed is curation. Attention must be paid to whose words, precisely, you are imbibing. Early on in my Twitter usage, I realized that those I followed were disproportionately white; I sought to course-correct, and spent time consciously making sure people of color were more adequately represented in the voices I paid attention to.

Likewise, I made sure that there was gender parity or close to it (I favor women on Twitter) in the voices I listened to. One of the most exhilarating factors about social media is precisely the fact that it has no gatekeepers, which, certainly, lends fractiousness and cruelty to the dialogue on occasion. But it also means that social media can be a place where women, minorities and activists frequently left out of legacy publications can speak out and be heard.

Recently, I used an open-source application called proporti.onl, which estimates the gender divide among those you follow on Twitter, to ensure that I was living up to my own ideals. (It’s about 60-40 women to men.) The app isn’t perfect; its analysis is based on usernames and profile descriptions, and its estimates are rough. But they’ve been borne out by my manual inspection of follow lists.

And then, out of curiosity, I checked up on some of the boldest, smartest figures I follow – especially the men… and hit a wall.

Men with prominent voices – from Yair Rosenberg to Chapo Trap House’s Felix Biederman (@ByYourLogic on Twitter), the center to the far left – fell far short of parity. (Both are enthusiastic Twitter users.) 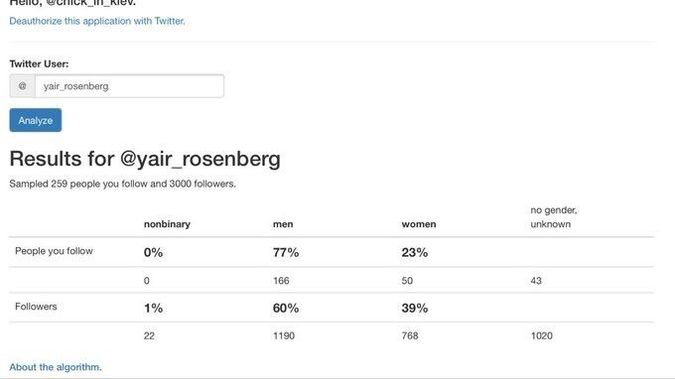 If this seems like a game of “gotcha,” or simply petty, perhaps it is, to an extent. But it also highlights something important. Twitter, for many, is more than just a casual hobby or source of memes; it’s a means to test ideas, gain perspectives, consume news and have progressive dialogue in a freewheeling, unlimited space. It’s a place where people break — and occasionally make — news.

But if those who shape our opinions — even progressives — have such an overwhelmingly male well of exemplars to draw on, it’s no wonder our discussions so often devolve into sexism, or omit female perspectives altogether.

While I can’t guarantee that the sages of Pirkei Avot would advise you to diversify who you follow on Twitter, I know that sagacity manifests best in a multiplicity of perspectives. That’s something borne out by the Talmud’s style of dialogue itself, with its “threads” of disagreement, dissent and alternate narratives.

Sadly, the exclusion of women is part of that tradition too — but it’s something we can work to transcend. If you want to shape policy that affects women – listen to their voices. (All policy affects women, by the way; we’re half the population.) Ensure that the voices you listen to are illuminating things you couldn’t know firsthand, and thus ensure you are not stuck in an echo chamber.

The best advice I’ve gotten about organizing is to start small, focus on details, and concentrate on what you know. If you want to shape a progressive future, start with your own Twitter account.