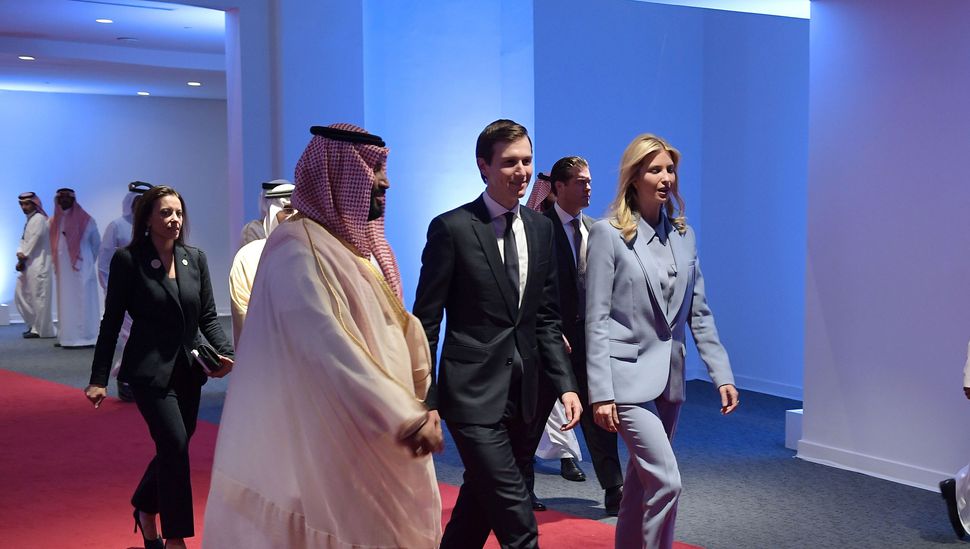 True to his nature, President Donald Trump once again threw out the rulebook of international diplomacy when he hosted Saudi Arabia’s powerful crown prince and de-facto ruler, Muhammad bin Salman, also known as MbS, at the White House on Tuesday.

It was then that Trump announced that Washington would sell some $200 billion in arms, and MbS declared that the total Saudi investment is expected to exceed $400 billion over the next 10 years.

The announcement is emblematic of Trump’s approach to foreign policy, which is utterly transactional – an unprecedented approach for the U.S.

But in addition to being unprecedented, Trump’s actions may have had an unintended side effect. For the President potentially upended 70 years of unconditional U.S. support for Israel by effectively declaring Saudi Arabia as Washington’s principal ally in the Middle East.

Saudi Arabia’s direct appeal to Trump’s “America First” agenda is strengthening the Kingdom’s position, while Israel’s influence over the White House is quickly vanishing. But Trump is also allowing the Saudis to start closing the gap of Israel’s military superiority in the region — which could have disastrous effects.

And one person made this reversal possible: the President’s son-in-law, Jared Kushner.

The close ties between the U.S. and the Saudis was brokered by Kushner. From the onset of his campaign, Trump declared his desire to broker the “ultimate deal” by solving the entrenched Israel-Palestinian conflict. Once in office, Trump’s strategic objective, laid out in his National Security Strategy released in December of last year, sought to bring Israel closer to the Gulf Cooperation Council (GCC) monarchies as part of an effort to isolate Iran regionally.

The “glue” that was supposed to link Israel to the moderate Sunni Arab states was the Israeli-Palestinian peace process, of which Kushner was supposed be the architect.

On the eve of his inauguration, Trump said, “If you can’t produce peace in the Middle East, nobody can. All my life I’ve been hearing that’s the toughest deal to make, but I have a feeling Jared is going to do a great job.”

Since Trump’s prophetic words, despite having had no prior foreign policy experience, Kushner has taken the lead on the administration’s diplomatic dealings with the Middle East.

With the objective of advancing Arab-Israeli peace making, Kushner successfully persuaded Trump to make Saudi Arabia his first destination for a foreign state trip as president.

It was a mysterious choice, though, and one heavily objected to in the security community. Then-Secretary of State Rex Tillerson and Defense Secretary Jim Mattis opposed the move, The Washington Post reported on Tuesday.

But as details about Kushner’s Middle East friendships emerged, the mystery began to clear up. Kushner had forged a strong personal relationship with MbS, as well as with the UAE ambassador to Washington, Yusuf al-Otaiba, who helped organize Trump’s Riyadh Summit.

Given that MbS’s younger brother, Khalid bin Salman, was a graduate student at Georgetown University before being appointed ambassador, Otaiba has for all practical purposes not only played a mentor role for the young envoy but essentially sought to align Abu Dhabi and Riyadh’s foreign policy positions in Washington.

It is also widely understood in Washington policy circles that it was Otaiba who lobbied Kushner for Trump to pay Saudi Arabia his first visit as president as part of Abu Dhabi’s objective to forge a strategic alliance with Riyadh.

These dynamics, coupled with Trump’s affinity for MbS – who he called a “close friend” on Tuesday at the White House – has unnerved Israel, even if Prime Minister Benjamin Netanyahu has gone to great lengths to broadcast the strong personal bonds between him and the president.

Complicating the matter for Israel and for Netanyahu in particular are media reports suggesting that Saudi Arabia, the UAE and US are launching a trilateral security forum to address Iran’s “malign activity” in the Middle East and other strategic issues.

Israel has little to offer Trump’s America First agenda. As a recipient of US aid, it can’t pay for weapons like the Saudis can.

That is not to say that Israel is not a valued strategic ally. But in a climate where a “transactional” foreign policy literally centers on investing billions of dollars into the US defense industry in order to curry favors from Trump, Netanyahu, or any other Israeli leader, has little to offer.

The problem with Trump’s transactional approach is that the Saudis expect something in return for buying $400 billion worth of defense equipment. That something could be anything from expecting a US diplomatic posture against Iran to demanding more influence in Washington over its foreign policy priorities.

But whatever it is, it will inevitably come at the expense of Israel, which has up until this point been America’s principal regional ally.

Indeed, it’s not been lost on the Israelis that the ambassador of the UAE has clearly surpassed the influence of Israeli Ambassador Ron Dermer. And next in line of the Gulf monarchs to visit Washington is the UAE’s de-facto ruler, Mohammed bin Zayed Al Nahyan, or MbZ.

There’s a very specific material way in which MbS and MbZ’s visits could harm Israel. The UAE has long sought to acquire the Joint Strike Fighter, also known as the F-35 Lightning II Program. The JSF is designed to be a game changer, with combined air-to-air and air-to-surface capabilities, which means that it can both support ground troops and naval forces.

While Israel is not a JSF partner country, it has acquired an F-35 through the U.S. State Department’s Foreign Military Sales program.

In light of the emerging UAE-Saudi strategic alliance, coupled with Trump’s America First agenda, should Abu Dhabi acquire the JSF, Riyadh would likely request it as well.

In other words, Trump — with the help of Jared Kushner — is closing the gap of Israel’s military superiority in the Middle East. And this is incredibly dangerous.

It would be ironic if Netanyahu has already begun to miss President Barack Obama, if only because of the predictability of his policy towards Israel, the GCC and Iran.

Even if Netanyahu and the Saudis resented Obama, at least they could craft strategies based on a predictable US political environment as opposed to dealing with the perpetual chaos of the Trump presidency.

Sigurd Neubauer is a Middle East analyst and columnist based in Washington. Follow him on Twitter @SigiMideast.